Dare you to buy a shirt

1. April’s coming to a close and honestly could you be more impressed with how well the kids have played so far? Oh boo hoo let’s wait until 2016 and then we’ll REALLY be good… orrrrrr we could probably just assume the best GM in baseball and the best manager in baseball and the best young group of players in baseball would be able to magically figure out a winning formula. And guess what? THEY DID! We’re 11-7, 1 game back of the division leading and – very fortunately – the Adam Wainwright-less cardinals.

2. Question: but it’s really just April so who gives a shit?

3. Answer: me and any sane, rational fan as well. A win in April is the same as a win in September and if you don’t believe me then just ask the 2011 Boston Red Sox. (Or 1969 Cubs, for the Red Sox fans now sprinting to the comment section.)

4. That said, let’s take a look at the next few series: 2 more at home against the Pirates (already up 1-0),  3 at home against the red hot 4-16 Brewers, and then off to St Louis for a 4 game series against a bunch of inbreds. That’s a pretty encouraging slate of 9 games to look forward to: we take a series from an above average Pirates team over the next two games, then we sweep Matt Garza and then we have a national coming out party by curb stomping the red birds on their home turf.

5. My dad always told me to give credit where it’s due. He also told me – at a funeral when I was 6 years old and first understood what it meant to die – “stop crying. no one gets out of here alive…” like he was raising me in a goddamn Clint Eastwood movie or something. Nevertheless, the point is this: Starlin Castro has been a flat out fucking stud this year. And he’s done it RIGHT in my mother fucking face. I kind of like that move on hist part, so to that I say touche. (Always italicize touche btw.)  However, it’s important to remember two things: (1) there’s still a lot of baseball to be played AND (twooooo) historically, Castro torches April and that’s not debatable. It’s been by far the best month over his career. So am I happy he’s exceeding expectations and playing like a top 5-10 shortstop? Yes absolutely. But I’ll be absolutely fuckin THRILLED if we’re having a similar conversation in June.

7. Junior Lake just got called up for Brian Schlitter, which means we no longer have two things in our bullpen: 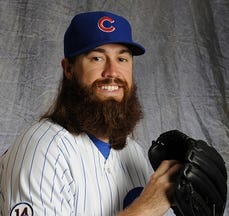 (B) A right handed pitcher that throws 96 but doesn’t really strike anyone out. Buzz. Your career 5.4 strikeouts per 9 innings. WOOF.

8. The Kris Bryant Yabo watch is going to start to heat up pretty soon. For his sake, I hope the big fella runs into one pretty soon because last thing he needs is to be getting asked about his power. That happens and who knows, maybe he starts over swinging. For now, he’s playing like a 10 year-vet which brings me to this: I actually think it’s impressive Bryant hasn’t gone deep yet. Hear me out: everyone knows this kid has monster power, so they’re trying to gameplan around what they PERCEIVE to be this kid’s strengths. So here we are, 10 games into his presumed Hall of Fame career (take it easy) and we’re a little sad to see he hasn’t gone deep. But somehow he’s managed to post a .480 OBP while hitting .351. That tells me a few things: first, he knows his strike zone. Duh, he’s the best prospect in baseball. Second, he’s not expanding that strike zone to try and drive it. He’s letting the pitcher’s come to him, and when they do, he’s hitting .351. And that .351 has a lot of nice little singles to right field, which tells me he’s not just another big donkey out there only dropping dick. He can hit for a high average too, which is nice.