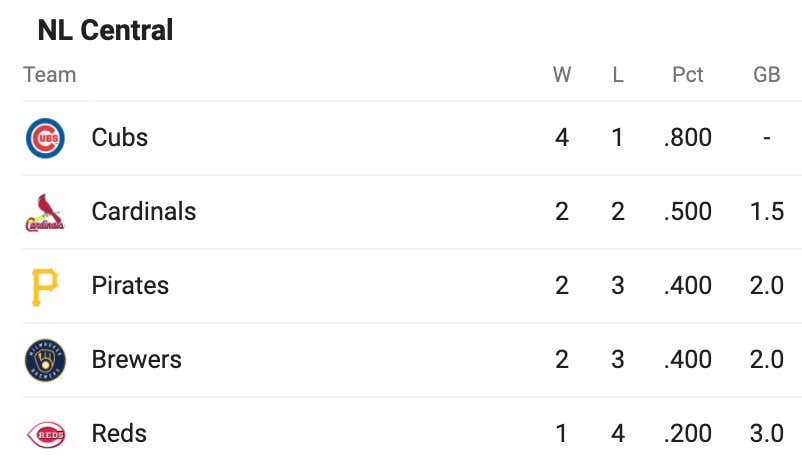 - Let's start there because at the end of the day, it's all that matters. Wins and losses. Division championships. Interstellar domination over your hated rivals. These are the things we live for as baseball fans, and right now it's pretty fucking good on the north side of Chicago. Even better is that we don't have to fool ourselves over games not mattering because It's A Long Season You Guys. We've been saying that shit to each other since the dawn of time. The 60-game sprint is a nice change of pace where the energy has to be there every night, and no doubt about it the Cubs have that energy.

- David Ross has the boys looking so crisp I don't even know where to start. It's also quite an intangible sensation so maybe just keep it simple and admit you can tell a difference too. Right? I mean I'm not crazy for thinking this is a completely different team from what we've seen in season's past despite fielding a near identical roster. And you can call me dramatic and tell me it's early but the reality is we're gonna break the first 10% of the season tonight. If the boys were 12-4 at that point you'd be tapdancing along just fine so keep it in perspective. Reality is the team LOOKS different and for now that's enough.

- I promised you guys last night that if Javy Baez went deep, I'd give you an A+ shirt. That was my commitment to you.

Ask and you shall receive, TWICE

Literally couldn't make it any easier to put this one on the shelves.

People who don't understand that reference can pound sand. What's important is that a non-t-shirt guy (ME) is slinging relevant merch on-demand in realtime. And even more important is that you can basically attribute both those heyhowyadoin ding dongs with my commitment to sell this shirt. Do they happen without it? We'll never know so excuse me while I absorb some credit.

- Related, Javy hit both homers off arguably 2 of the hardest throwing relievers in the NL. Lorenzen is consistently over 100 and same for Amir Garrett. I love that he looked kinda stupid against Mahle (who blows) and then comes back with a laser double in the 6th and two bombs. 2 plate appearances in he's 0-2 and ugly. 3 more later and he's the best player of all time. Don't ever fall asleep on Javy.

- Alec Mills looked so fucking crisp. Dude has some balls that you get when you realize this is literally the only chance you'll ever get to start in the Big Leagues with the Cubs so you better take advantage of it. Last night we saw a guy who was willing to challenge hitters, change speeds in the strike zone and pitch inside. All of that is a mix that you need to be successful if you don't throw 95+ or have amazing shit. Mills is good enough to survive but then pitches aggressively. Think Hendricks but not even close to the polish and repeatability. But he's working on it. That's his trajectory if he wants to be a regular. Just pound the strikezone, mix your pitches and don't be a little bitch. That's how you earn a living and Mills looked every bit up to the task last night.

- Castellanos looks so good. It just sucks that he had to play for the Cubs in a nonplayoff year and make me hyper aware of how much I love him. Life was fine before I knew his energy. Now I'm borderline incomplete without it. Goddamn you Nick.

- WE GOT A GAME TONIGHT

- Talk about a lineup: Bryant, Rizzo, Baez, Schwarber, Contreras, Heyward, Happ, Caratini, Hoerner with Hendricks on the mound. No exaggeration that's a terrifying mix and I think the perfect lineup for all the offense you need to win games this year. The bullpen minimums and new rules are making it nearly impossible to get comfortable in later innings and we're seeing the effect it has early. The circumstances are throwing way more obstacles towards pitchers, and those are most felt by relievers. At least that's what I'm telling myself to overcome the anxiety born from the overwhelmingly mediocre Cubs' bullpen.

Ultimately when you have this kind of team and lineup, the wins and losses will come down to scoring a fuck ton of runs. If you think there's 2-1, 3-2, etc. kind of wins on the schedule, you're wrong. Those will come in some spurts, but it's going to be a lot of 7-5 kind of games. That's what it's going to take and if that's the case then I like our chances. Especially tonight with all this fucking momentum.

- Last thing PROGRAMMING NOTE: I'll be doing Cubs postgame tonight on Twitter instead of IG. Not that anyone gives a fuck but we're trying to grow an audience so I have to show everyone on twitter the kind of fun we have on IG. Just work with me people I'm trying my best.