You should go listen to Eddie's podcast because it's very good. Last week we visited with Big John The Mailman to do a Snake Draft on things that are OVERRATED. And if you know the Old Sailor the way I do, then you obviously understand there's some fucking heat coming your way. Absolutely fantastic episode that we follow up again this week with a look at the UNDERRATED.

For now though, I want to talk about the OVERRATED because that's what's on my brain.

We'll get to Guacamole in a second.

Per usual there were some notable controversies: WSD drafting Tom Brady and Denzel Washington in the 1st and 2nd round. Eddie disrespecting one of the greatest Entertainers of my life. Chief refusing to take Reese Witherspoon to Au Cheval. And on the list goes, as to be expected at this point in Barstool Chicago Snake Draft History. So go listen to the fucking episode. 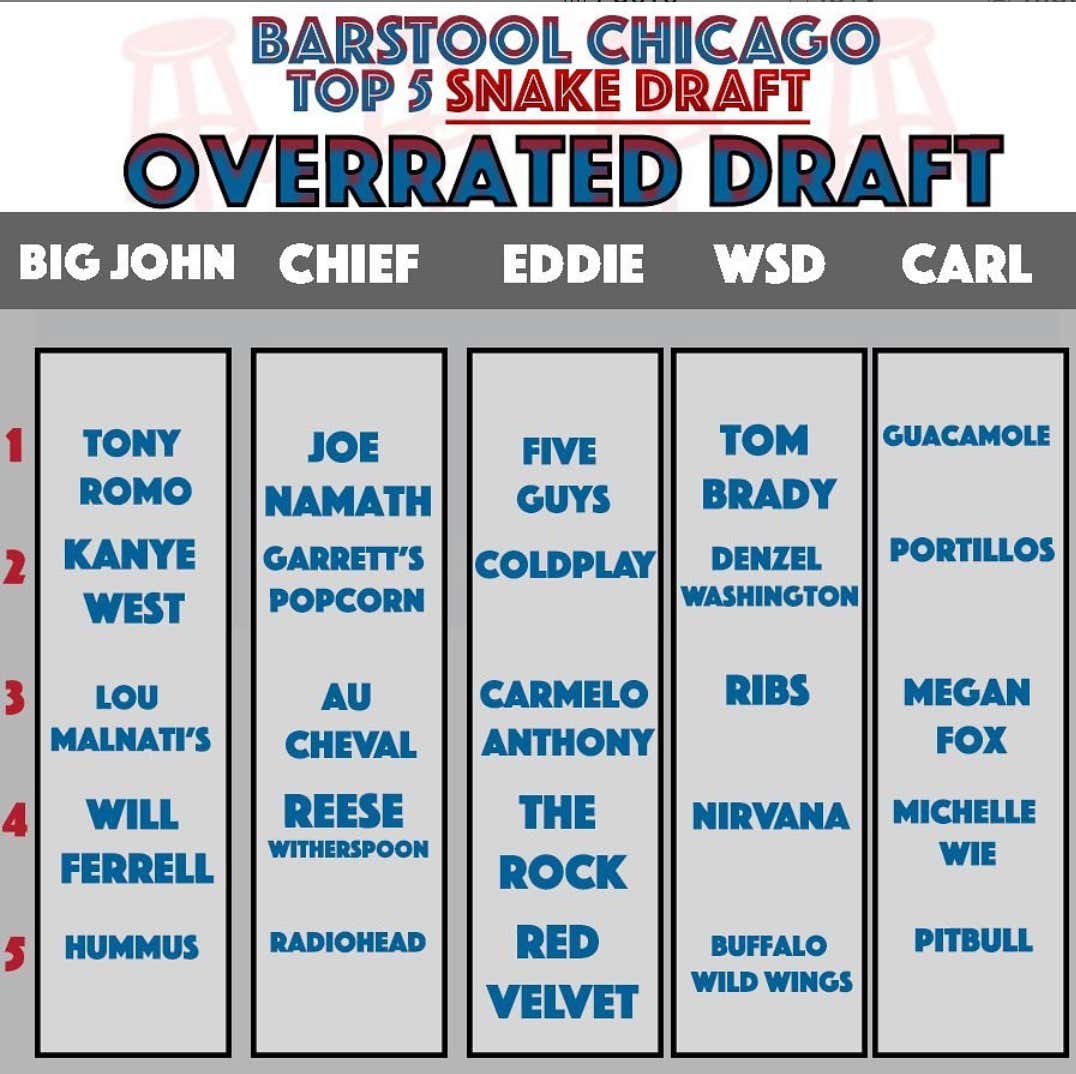 You'll notice I take my comfortable position in the 5/6 hole at the back of the draft. That's on purpose because I like to see the whole board in front of me. And while we're getting familiar with the circumstances, let me remind you this was an OVERRATED draft. Not a THIS THING SUCKS draft. We're talking purely how much people generally think something is better than it really is. And if you can't get your fucking head around that part of the discourse, kindly leave. Classic examples of this misunderstanding are people saying NIRVANA was one of the best bands of the 90's. Or: Five Guys has the best french fries Eddie!!  Or: Mr. Worldwide puts on a damn good show Carl, you stupid fuck.

Nobody is saying Nirvana blows or Five Guys should get shut down or that Pitbull didn't get screwed at Super Bowl 54 in Miami when Shakira refused to collaborate with him thus forcing him to do an embarrassing pregame tailgate concert. NOBODY IS SAYING THAT.

It's just a representation of things we find to have INFLATED VALUES. And for my money, it's hard to beat Guacamole when you're talking about things that deserve less credit. And I know a lot of you are ready to murder me but before you work up an appetite and then spend $3 at Chipotle on the guac just hear me out: your boners don't need to be that stiff.

I enjoy guacamole. But I don't think it needs to be $14 when you're working with 2 avocados and half an onion, some tomato and a pinch of a salt and pepper. I think it can basically be served as an appetizer on a tortilla chip and nothing else. Sure it works on the side of a quesadilla but it's already playing second fiddle off the bat. When we talk guac as a side, we mean it as a standalone. And when you go standalone, you garnish with unspectacular tortillas. Excuse me but why is this priced with the buffalo wings when it belongs below the pretzel bites?

Or if you want to talk about it as a side... Maybe to your quesadilla or your burrito or tacos... then let's also mention it's consistently overpriced. And FYI overpriced goes hand-in-hand with overrated. They know the diehards are powerless and to me that makes the diehards weak and stupid. Your dependency turns brown within 90 minutes of room temperature exposure. 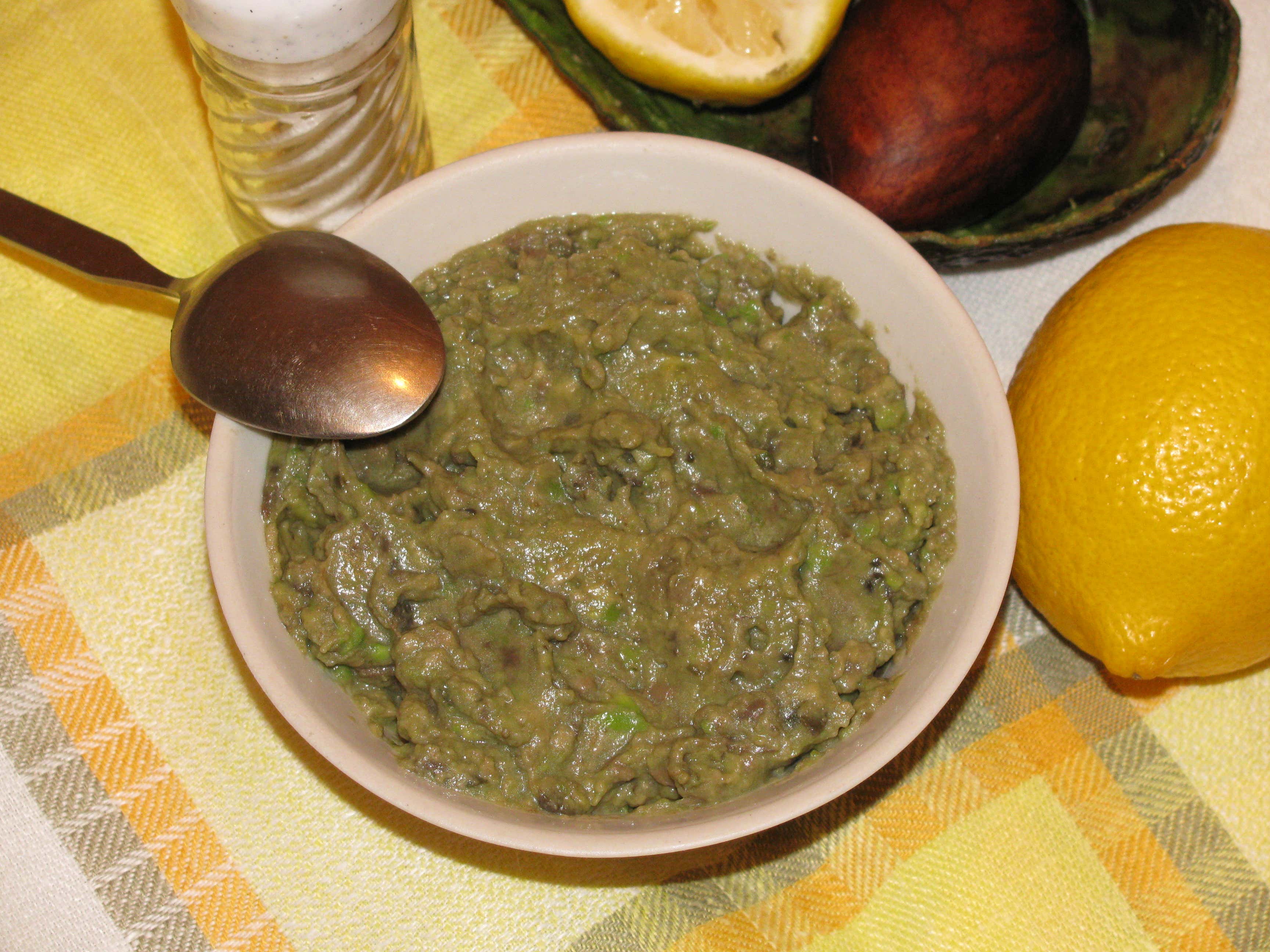 That's arguably the tightest shot clock on the table when talking restaurant food and I'll go ahead and include oysters. At least some of the classy places serve that shit on a bed of crushed ice. At least they'll chill it because you're paying $3/shell. But avocados? Absolutely ZERO respect from the industry. Whatever you don't eat is thrown out.

Again I'm not saying guacamole blows. I'm not even saying it's average. I happen to enjoy its flavor and appearance routinely, but I understand the cost and tradeoff when you go guac. You have to play at the same level as everyone else ordering it, which means you're going to pay more and get less. Fucking blows that they don't have different levels of guacamole enthusiasm you can register when ordering it. Like the way Cold Stone does their serving sizes. Give me an option to be flexible and get an appropriate amount. Don't sandbag me with 16 ounces then charge me $27.50. Instead be fair and give me some choice.

Until then, Guacamole is too rigid for me to love. I can't commit like some of you. Does that make me a monster? Probably in some eyes but I'd rather be honest and my honest conscious says that shit is overrated.

PS - I could be alone on this but I have a bunch of drunken nights under my belt where I bring home an appetizer sized styrofoam container of guacamole alongside a late night burrito and there's something about waking up on the couch the next morning to brown guac. Maybe just me but that was definitely a phase complete with all the Irish guilt about spending $36 on authentic Mexican food and then taking 6 bites. Gotta love those nights. Savor them while you still can.