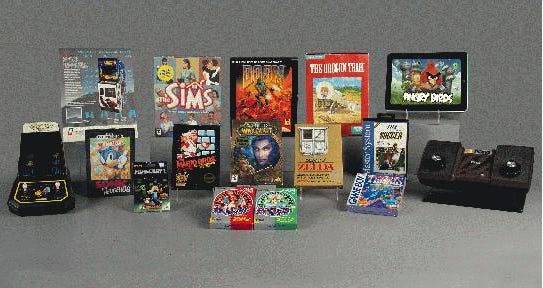 Rochester, N.Y. - The new World Video Game Hall of Fame announced the finalists for its inaugural class Tuesday. This year’s finalists are: Angry Birds, DOOM, FIFA, The Legend of Zelda, Minecraft, The Oregon Trail, Pac-Man, Pokémon, Pong, The Sims, Sonic the Hedgehog, Space Invaders, Super Mario Bros., Tetris, and World of Warcraft. The Strong Museum of Play said it received thousands of nominations. The video game hall of fame was created to recognize electronic games of all types _ arcade, console, computer, handheld and mobile. To be inducted, a game has to have enjoyed sustained popularity and influenced the video game industry, pop culture or society in general. The inductees will be announced June 4. The number of inductees has not yet been specified.

Cant believe it took this long for a Video Game Hall of Fame to arise. We got goddam video games on ESPN2. Its about time we have a HOF for them. Now obviously this isnt an easy task. Its all electronic games, not just traditional “video games,” and clearly they have the hard task of honoring games thats were from like 1980 all the way through 2015.  Not an easy task to recognize video game greatness for 35 years. So lets break it down with the Good, The Bad and The Ugly:

For the most part this is a good list. A lot of the heavy hitter legendary games. Obvious Mario and Zelda are in. Mario Bros was what launched Nintendo and video games mainstream. Zelda is the best fantasy action adventure series ever. Pac Man, Tetris, and Space Invaders deserve to be in there because they were pioneers. Obviously video games advanced to a much more awesome level in subsequent years, but at the time stacking blocks and eating dots and shooting ships on a scrolling screen was a big deal for the video game world. Sonic I was borderline about. I almost put him in the Bad. Sonic is just like a bootleg Mario. Collecting rings instead of coins and running and jumping over bad guys and shit. But that being said, Sonic was Sega’s Mario, and Sonic is an enormous part of video game history. It deserves the nod. FIFA is a good sports video game choice. There are major omissions in this department, which we’ll get to. But dont penalize FIFA because they missed some of the other heavy hitters. FIFA is at the top of sports gaming and should to be in.

The computer game choices are all solid – Oregon Trail (G.O.A.T) Doom, and SIMS all on the list for best computer games ever.

The Bad is a combination of a new age game and the oldest of old. Pokemon sucks. Maybe thats because I’m 30 years old and never lived the Pokemon era. Maybe thats because I’m white and not Asian. I dont know. But I do know Pokemon sucks. However I recognize that it spawned playing cards and movies and cartoons and shit so I cant call it ugly. Pong is similar to Tetris and Pac Man in that it deserves some respect for being the first video game ever. It was the originator. But that shit was too primitive. Just bouncing that ball back and forth is too rudimentary. I understand it was the forefather but I could never sit down and play pong now, whereas I think I could still be entertained by something like Tetris or Pac Man.

And the Ugly are just games that have no business being there. Angry Birds can fuck right off. I dont care that its like the most downloaded app ever. Shit is like 15 minutes old and has no business being mentioned in the same sentence as these other games. And Minecraft is even worse. I dont know what the fuck Minecraft even is. Might as well put the Farmville game from Facebook in there. Awful.

So for the most part they nailed it, but I think they tried to get too cute with new age shit. Maybe in 10 years Angry Birds is in the convo but certainly not now. As far as the major omissions, here is my personal list, in no particular order:

2. Ocarina of Time – Best of the Zelda series, maybe best game ever

4. Final Fantasy 2 and 3 – The best RPG game ever. I know they have gone up to like Final Fantasy 39 by now but the NES and SNES versions were the best

7. Grand Theft Auto – The best game to just dick around and have fun

8. Call of Duty – I think? I kinda fell off during the Call of Duty age but the ones that I did play they were the best military games ever.

Now for the Sports omissions:

For my Computer Games:

3. Original Sim Cities when you were building cities and not people.

Obviously there are a TON more awesome video games. But if you’re talking about first ballot, inaugural class of the Video Game Hall Of Fame, I think these are the ones.