The Barstool Fund - In Support Of The 30 Day FundLearn More
Giphy Images.

I've always been a huge free samp guy or as I like to call them, "tapas for poor people". Running into a delicious free sample stand while you're out running errands is one of life's most gratifying simple pleasures. They're like wedding hors d'oeuvres except you don't have to dress up all fancy and write the bride and groom a check in order to enjoy them. However, when Covid19 started ramping up, Costco announced they would no longer be offering free samples. I was distraught. Was this the first domino to fall that would eventually lead to all free samples becoming a thing of the past?

Thankfully, our national nightmare is over, as Costco recently announced they will be bringing back free samples:

Last month, Costco’s chief financial officer, Richard Galanti, said the company will bring back its beloved sampling program this summer. The announcement, made during the company’s quarterly earnings call, was scant on details: "It’s needless to say not going to be where you go and just pick up an open sample with your fingers,” Galanti said.

But it sent a clear message to the industry that sampling isn’t dead, and could be effectively mobilized during the pandemic given the right circumstances and safety precautions.

This got me thinking though, in my lifetime, which free sample experiences have I enjoyed the most. Let's take a gander.

The only non-edible sample on this list but seeing as you can try just about every gadget in the store without making a purchase, it qualifies. Getting dragged to the mall by your Mom or girlfriend? Not always a pleasant experience. Getting dragged to the mall just to post up in one of Sharper Image's massage chairs while your significant other does all the actual shopping? A wonderful way to spend an afternoon. 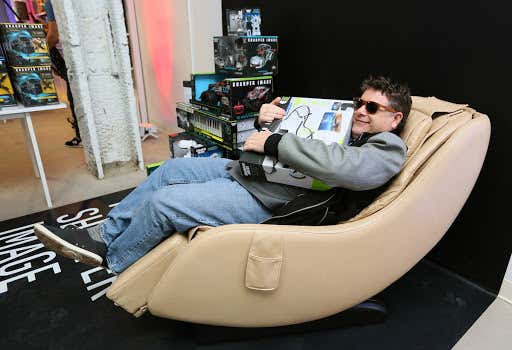 Sticking my hands in their wax baths was another one of young Donnie's favorite mall activities. 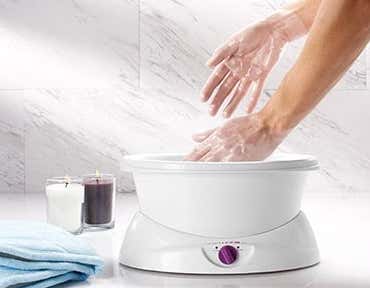 By the way can someone explain to me the benefits of coating your hands in hot wax? All I know is that before discovering what my penis was for, it was my one of my favorite sensations. 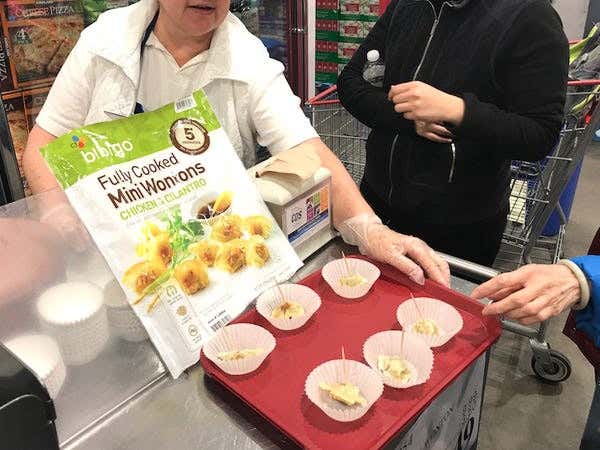 Costco (and BJ's Wholesale) are where I have my earliest memories of free samples so I'd be remiss not to put them on the list. Back in the heyday of free samples, you could take 4 laps around Cotsco (with pitstops at every sample stand) and have consumed the caloric equivalent of a feast. I get bored at restaurants where everyone orders one gigantic dish for themselves. I prefer the Chinese style of eating where everyone shares every dish brought to the table. That was the beauty of Costco, you could sample four different cuisines and seven different food groups in a matter of minutes. My personal rule of thumb is that you can go back to the same sample stand three times before starting to feel like a shitty poor person. Sometimes I considered bringing a hat, wig, or fake mustache with me so I could go back for my 4th, 5th, and 6th serving (my parents fed me enough as a kid I promise). However, I was surprised to learn, that the official Costco policy is customers can come back as many times as they want without being told to fuck off.

(CHEATSHEET.COM) Don’t feel like you are at a fancy cocktail party and it is impolite to take more than one item at a time. While you’ll probably get death stares from fellow shoppers if you hoard the entire offering, you won’t get bounced for it either.

One employee said this, according to PopSugar: “Once I was giving out Ferrero Rocher and this 15-year-old took nine trays worth. That was 63 candies and about 50 bucks worth of product, right into his pockets.” Technically, the employees can’t say ‘no’ to you. We can’t say no. It’s worth our job to tell someone they can’t have something.”

Keep in mind though, you are 100% a shitty person if you take nine trays of candy. What a conniving, yet courageous, little twat.

It's not secret I like drinking at airports. My obsession with Termies (AKA terminal sodas AKA beers you drink at an airport) has made that very clear.

Well the only thing better than enjoying a cold termie ($2 in China, $7-16 in the US) before take-off, is taking a complimentary shot of classy booze at a Duty-Free airport shop. 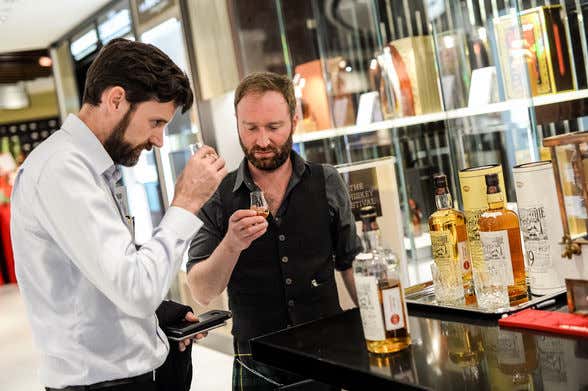 It's one of the best (and cheapest) ways to get ride of pre-flight jitters without resorting to pharmaceuticals. Be warned though, the employees manning these stands are the least friendly of the free sample suppliers mentioned in this blog and are experts at sniffing out bullshit. If they sense you're just looking for a free buzz, you're at risk of being cut off. That's why after each sip it's important to act as if you are deep in thought, thoughtfully analyzing the subtle flavor notes of whatever booze you just guzzled. I mean just look at the dude in the above photo, he's staring deep into the soul of that shot glass like it's a god damn crystal ball. 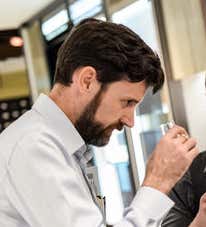 If you can mimic his textbook alcho-snobbery, you'll be able to finagle more than a few shots of free booze before the staff is forced to call TSA.

Everyone reading will be able to relate to this one. The guy or lady behind the counter of a Chinese food court restaurant offering every passerby a toothpick topped with either General Gau's or teriyaki chicken. 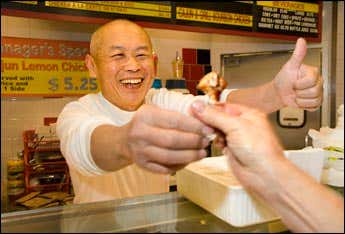 The only reason this isn't number 1 on the list is because that first piece of tooth pick chicken would taste so orgasmic that I'd often end up ordering a full plate of it, and then by the time I was halfway done, would be completely sick of it. Don't know what type of sorcery that is but my guess is it involves MSG. The key was to sample whatever type of chicken you didn't plan on ordering. This way you'd get a free mini-appetizer and in turn wouldn't get sick of your main course as fast. #lifehacks

In college I worked a landscaping job for a summer. By noon we'd be covered head to toe in dirt, which didn't deter us from walking into this fancy meat and cheese shop called Formaggio Kitchen everyday for lunch. 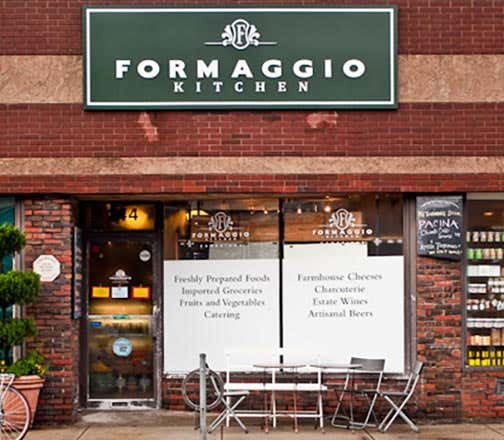 The store would have a bunch of plates out featuring their finest cheeses and cured meats that customers were welcome to sample. 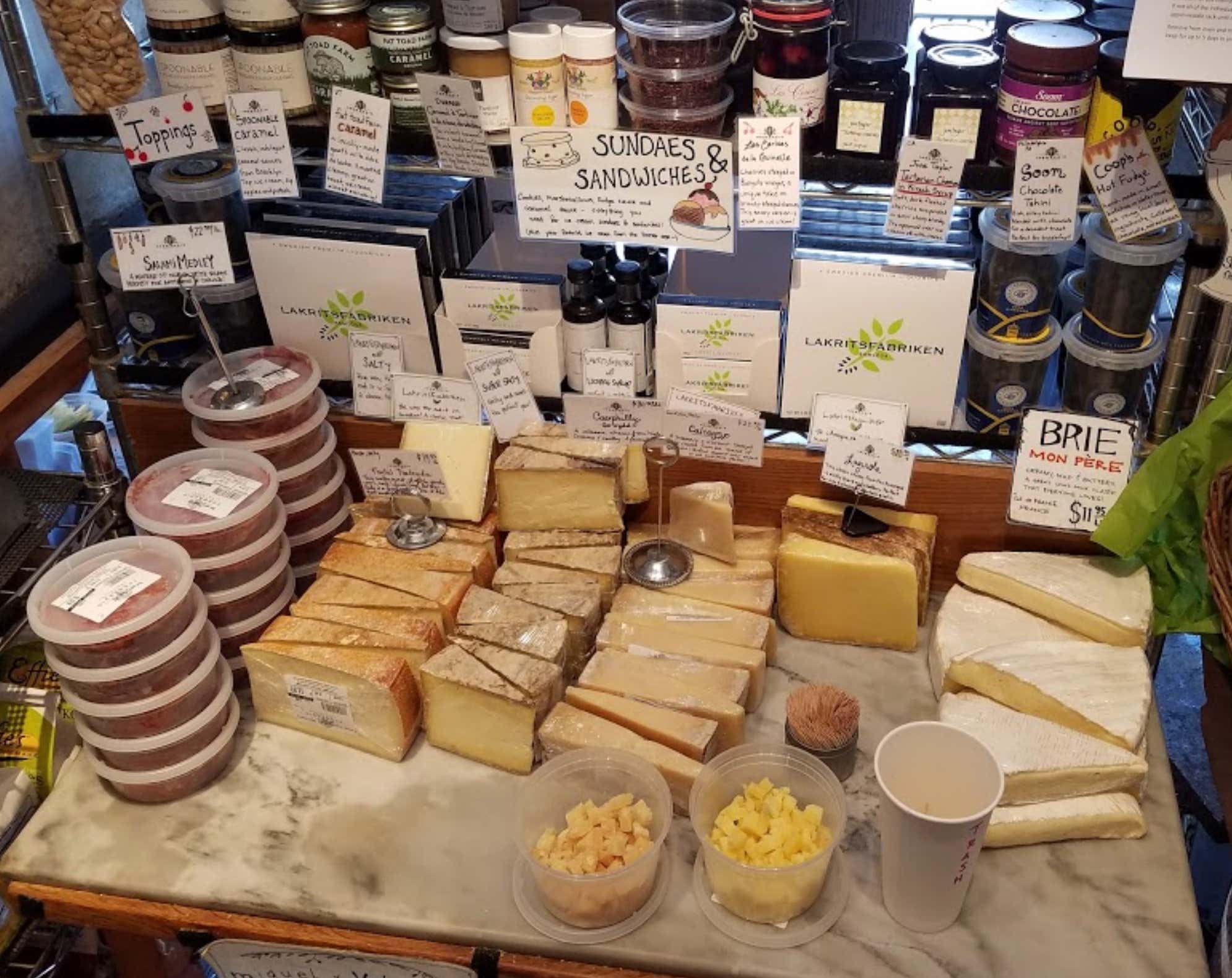 To say "we went to town" on the samples would be an understatement. We were more or less building our own charcuterie platters except the platter was just our muddy calloused palms. Thinking back the employees probably trembled in fear seeing us walk through the door everyday looking like absolute bums who hadn't eaten in weeks, but to be fair, we would always purchase a sandwich and iced coffee so we weren't just straight up pillaging. God I miss that place. Simpler times indeed.

Sound off in the comments about other spots with great free samples that I can look forward to scavenging if the world ever goes back to normal.