Quick backstory here -- I got sent this video about a month ago. Was told that it was a Yankees employee in their baseball ops department using a camera to steal signs during the 2018 postseason. If you watch the video, then you'd more than likely agree that it's very much inconclusive. I needed more than that if I was going to go with it. I have the non-blurred version of the video, so I sent around a screenshot of the guy's face to see if anybody could actually confirm that he worked for the Yankees or not. Came up with nothing. The video also looks like it was filmed on a potato, so that didn't help much either.

What we do know, though, is that this is, in fact, Yankee Stadium and the individual in question is, in fact, pointing his camera at the catcher very, very close up. Suspicious? Yes. Smoking gun? Hardly.

Okay, so while this *is* an added layer to all of this, it's still not a smoking gun for me, nor should it be for you. No matter how much you want to see the Yankees crash and burn for their hypocrisy in the fallout of the Astros' cheating scandal, it's just not conclusive and the active player source really doesn't prove much beyond it being speculation, especially if the player chooses to remain anonymous. Maybe if we knew they played for the Yankees in 2018 then we'd all feel much differently, but we don't have that information so it remains nothing but interesting internet fodder.

Here's what I think -- I think half the league, maybe more, was using cameras to steal signs in recent years. Were the Yankees one of them? Well, yeah. The original Athletic report cited the Yankees 76 times as being a team that used the video replay room to steal signs from 2015 through 2017. The issue here is that this method of sign-stealing became definitively illegal after 2017, and the Yankees have maintained that they stopped stealing signs via the replay room following the 2017 season when the league really cracked down on the issue.

That's why this video is so intriguing is because it is said to have been taken in 2018. During the postseason. I guess that's why, me personally, I'm not all worked up about it the way that everyone else was worked up about the Astros' scandal because the Astros won a World Series when they were cheating their dicks off in 2017, and the Yankees got their dicks blown off in 2018. Like, M80 down their pants on the Fourth of July blown off. And I think that's also why this will probably just go away, no investigation will ever take place, and no punishment will ever be handed down, even if this is true. They didn't win anything, so nobody cares. Quite the opposite. They suffered their worst postseason loss in franchise history that year. 16-1. Count 'em up.

There's also this -- in that same year of 2018, the Astros accused the Yankees of cheating, which is rich. Houston called out the Yankees for their use of a camera, but New York had the league's permission to use the camera in question. Paranoid guilt like ya read about. Its purpose was to "minutely capture hand grips as a teaching tool to show their pitchers ideal hand positioning to upgrade spin rate, movement, velocity, etc."

An Astros official confronted a Yankees employee operating a high-tech camera during their late-May series at Yankee Stadium, leveling a charge of cheating and threatening that the culprit would be barred from working in the major leagues for life.

The matter was quickly defused when the Yankees proved that the Commissioner’s Office already had given its blessing for use of the camera.

During the season, the Yankees wanted to buy a camera that took thousands of frames per second. They wanted to use it to minutely capture hand grips as a teaching tool to show their pitchers ideal hand positioning to upgrade spin rate, movement, velocity, etc.

They asked MLB for its blessing before purchasing the camera and MLB gave approval, but cautioned that such cameras might be banned next year as part of a large review by the commissioner. So rather than mount the camera — as most other teams that have one do — the Yankees would have an employee shoot from the center-field black camera well area. It was a wide-open, non-obscured area — hence, not covert.

Uh huh. Sure. Yeah. Studying pitch grips, while the camera is focused directly on the catcher. No pitcher in the frame whatsoever. 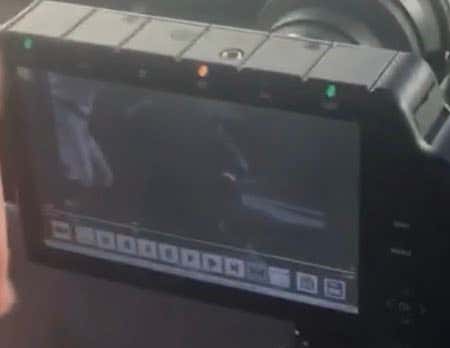 When I was poking around after receiving the video, I got sent the article cited above from October, 2018. I read what I highlighted in the excerpt, and figured A) that's probably what was going on in this video and B) if it's not and the Yankees were cheating, then this is what they will hide behind, the league will agree, and nothing will come of it. So, why waste my time?

I'm not holding my breath for something to come of this video, but we have to talk about it because it's out there now. And if it is one thousand percent proven that the Yankees were cheating in this particular video, then you bet your ass I'm releasing the full video with the dude's face in it and everything because JT Watkins was not afforded the same courtesy of anonymity when he was scapegoated over a lame ass witch hunt where nothing was ever really proven. Stay tuned.