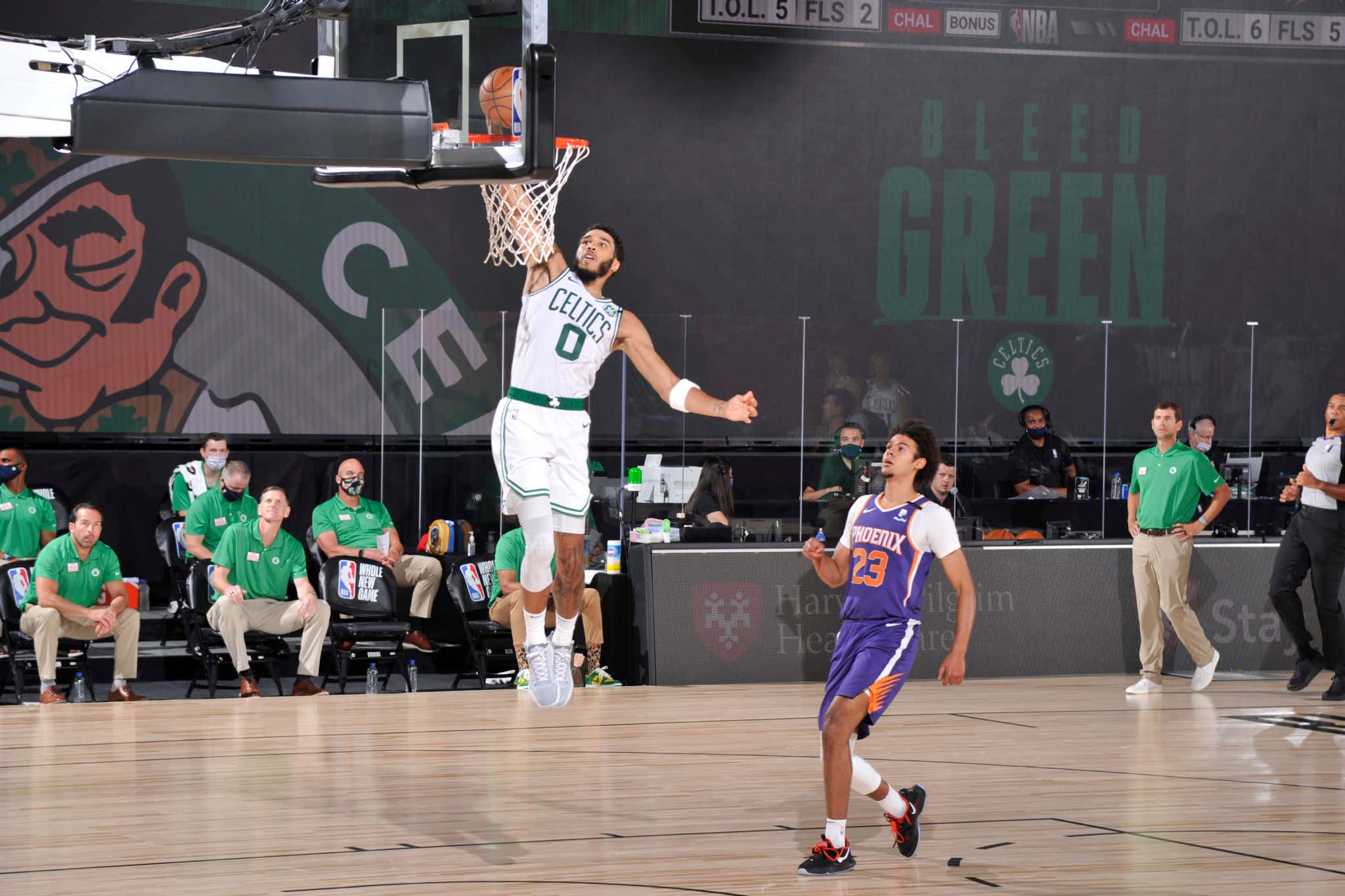 While being conservative, I'd say the Celtics were about 100000000000x better in their second scrimmage. Part of that is due to the opponent, I mean let's not talk up the Suns like they are contenders like OKC might be, and part of that is the fact that Kemba finally played and rotations could go back to normal. I don't think I'm alone in the sense that I needed a reason to not freak the fuck out about this team and that's exactly what we got. Kemba's burst looks FANTASTIC, and after a shitty outing to kick us off, Tatum looked much more like the All NBA player he is and the two Jays were fairly unstoppable. They even played better defense! So you see, the things that maybe were making you a little nervous before yesterday's scrimmage were all addressed and you should feel a little better today. This team still has to get a whole lot better before the playoffs start, but at least they showed us they are capable of not being a complete disaster on both ends of the floor. I would call that progress.

It felt great to not have your day ruined by this team playing like assholes, so for the first time since mid March let's talk about a win

- What makes this team so dangerous is when their wings are playing well, they are a matchup nightmare. They can kill you from so many different options both from the outside and attacking the rim. Well no Celtic has been doing that better through two scrimmages than Jaylen Brown. He's been their best player without question, and yesterday was a nice reminder that this is a player who is essentially having a career year across the board. His jump is real and it is spectacular

He's efficient, he's in control when he attacks and finishes at the rim, his outside shot looks great, he's making FTs, it's hard for me to think of a negative for Jaylen through two scrimmages. This performance shouldn't be a surprise considering he was one of the only ones who looked good against OKC, but you can see how valuable he is to the success of this team. Brad even said it

He took his hiatus seriously, came back in great shape and it's immediately translating. It would not shock me one bit if Jaylen was this team's best player in a deep playoff run. He's ready.

- Let's tell the truth for a second. In their first scrimmage, Jayson Tatum was brutal offensively. He was great defensively, but for this team to win he needs to not do that shit we saw against OKC. Then he started this game 0-4 and you could feel the takes coming. Well, all it took was seeing the ball go through the hoop once and then BOOM. Tatum was back

Yeah, that's the Tatum we all remember. He finished with 16/9 and was once again solid on the defensive end which you love to see. He needed a strong performance just to calm everyone down and for the most part that's what we got. The one thing I've noticed is he's getting ref'd like he's a goddamn rookie which is a little concerning because he was aggressive, he just didn't get foul calls.

- I tried to tell you all that Orlando Hayward was going to be a force now that he can game as much as he wants. You see other guys on this roster and in the bubble are tan as shit, meaning they've been outside. Hayward? Cream cheese white. That man leaves his room to practice or play in games and that's it. The rest of the time is spent gaming and look what's happening

17/6/3 on 60/60% splits as the fourth option. Is that good? That feels good. He made his open threes, he penetrated and found shooters, he rebounded well. If this is the version of Hayward we get, this team has a chance.

- All of us were interested in seeing how Kemba looked in his limited minutes, and the first thing you notice right away was Kemba's burst was back

he was also back to hitting that pull up three coming off a high screen, which is maybe the most important shot a Brad Stevens PG can have

We could tell right away when his knee wasn't right and he couldn't get by his primary defender, that no longer seems to be the case. We certainly aren't out of the woods yet, now the question becomes how does his knee respond to action? It would be my guess that Kemba sits tomorrow too. They saw what they needed to see and now it's time to get him ready for Friday vs MIL.

I can't lie though, it just felt great to see Kemba play again. I missed that smile.

- Crazy what a difference it makes when Marcus Smart plays in control. After a brutal showing on both ends in their first scrimmage, we saw Marcus go 5-5 and NOT ATTEMPT A THREE. Imagine that. Instead he attacked the rim and was more of a passer than a scorer and look how much better things looked. His 10/5/4 off the bench is exactly what this team needs. It's the 0-5 from three that they need to avoid, but I was very pleased with his shot selection in this one. Almost like putting him back in his original role is good for him.

- Uhhhhhhh so Romeo is good

We knew he was ready defensively, but Romeo looks so much more confident on the offensive end. It's not just his jumper either. He understands angles and driving lanes and was one of the more aggressive players in this scrimmage. This is a team that never gets to the line, and if Romeo is going to do it then it's time to give him minutes. Once again Brad agrees, giving Romeo the highest praise a human could possible receive

- This was by far the best we've seen Carsen play maybe all season. It wasn't just his catch and shoot three either. I thought he was great in terms of his passing and making the right play. At this point he just needs anything positive to help build his confidence, and it was good to see things finally go his way on the court.

- Having said that, Tremont is dominating the reserve point guard minutes

- Is Brad reinventing zone defense? Looked that way to me.

- Of course, this team is not perfect. In fact there were many parts of this scrimmage that stunk out loud. Another game where their defense wasn't ready to start, this time giving up 32 points and being unable to stop Dario goddamn Saric. What is that shit? Things weren't that much better in the second quarter either, and thankfully the offense woke up or we're writing a different blog today. Personally I'd like to see this team come out and defend at a high level for a full game, not just spurts.

- Maybe it's just me, but I haven't exactly loved how Daniel Theis has looked through two scrimmages. Both were against teams with massive back to the basket bigs, and for the most part Theis has been a non factor. It's never good when he has more fouls than rebounds which is what happened in this game.

- It's also a little concerning that Rob isn't getting any run with the normal rotation players. I thought he actually played pretty well in his limited role, but what I want to see is how he works with rotation players, not bench players. Maybe that's all just part of the plan to keep him healthy, but come on Brad let him loose. Let me see him run some P&R with Kemba or Hayward or something. Let me see him defend actual rotation players. He's one of the wildcards on this team so let's see how he does.

- Still no Tacko. This is inexcusable.

- For a team that usually leads the league in transition defense, where the fuck was it yesterday? Hell, it's been terrible in both scrimmages. The Celts were killed in fast break points 27-13 in this game and if they do that on Friday MIL might have 100 by the half. I'm trying to not worry about this because the Celts have a proven track record in that department, but man was it dogshit yesterday.

- What you thought just because this is a fake scrimmage I wouldn't care about the fact that this team went 20-31 from the FT line? You fool. It's all I thought about while staring at my ceiling at 330am this morning. It's a sickness and I will not apologize for it.

I'm really intrigued to see who plays tomorrow against the Rockets, a team that beat them twice this year. I hope everyone plays because I want to see if this team's perimeter defense can continue to improve. This won't be a matchup where size is an issue, but either way it just feels nice to exhale a little bit. It appears that the OKC game was mostly nerves because what we saw yesterday was much more familiar. Now everyone please stay healthy and let's get to Friday.