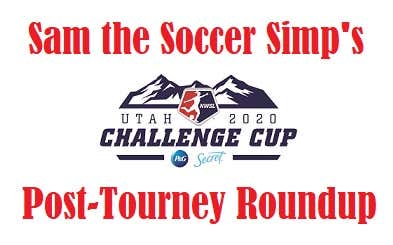 I typically stick to posting about previews/predictions and/or guides to following leagues/picking teams but after watching the final of the NWSL’s 2020 Challenge Cup this afternoon I feel compelled to blog about it for a couple reasons:

NWSL is not getting enough respect for being the first American league to prove that sports could be done – and done safely – in the middle of this corona mess. Keep in mind that they did all the planning months ago before the country had begun opening back up, and their success in pulling off the month-long tournament no doubt served as a template for other leagues to build upon. Even if you have no interest in soccer, or are the fragile type who are instinctively offended by women doing things, you still owe a debt of gratitude to the NWSL for getting the ball rolling and helping laying the foundation for MLS, MLB, NBA, NHL and perhaps NFL down the road. All the players and staff essentially put their lives on hold in order to travel to and live in Utah for a month. Have you ever lived in Utah*** for a month? Exactly, they deserve some serious thanks.

***Note: I have never been to Utah and all the photos I see actually make it look pretty damn cool – for outdoorsy people anyway… but any state with highly restrictive alcohol laws gives me the heeby jeebies (and don’t get me started on BYU’s anti-HJ rules)

If you watched the 2019 World Cup last summer you may remember Daly as playing a key role on the English team that was pretty damn good… albeit notttttttttt quite good enough to stop AMERICA from becoming back to back world champs.

Regardless, Daly was the best player in the Challenge Cup tournament and carried the Houston Dash – a team that have not won a playoff game in its history – throughout, appropriately notching an assist on Shea Groom’s injury time goal that sealed the win in today’s final over the Chicago Red Stars

In addition to lifting the trophy as team captain

Daly went on to earn both the tournament’s MVP and Golden Boot awards, and celebrated by crushing bud heavy’s at the postgame press conference.

Point being Rachel Daly had herself a nice little Sunday, and perhaps most importantly of all she has officially been added to my bucket list of people I want to crush some brewdawgs with (also consisting of Bastian Schweinsteiger, Lindsey Horan and Dries Mertens).

So long story short thanks to NWSL for paving the way for more #sports to help keep us all slightly sane, congrats to the Dash on their win, well done to Rachel Daly – and now back to your regularly scheduled programming.

Reminder: more MLSisBack knockout action coming up tonight and for the next couple weeks, which will be followed by a modified home stretch for the Champions League in August, so I’ll be back with more again soon. Stay safe out there kids.