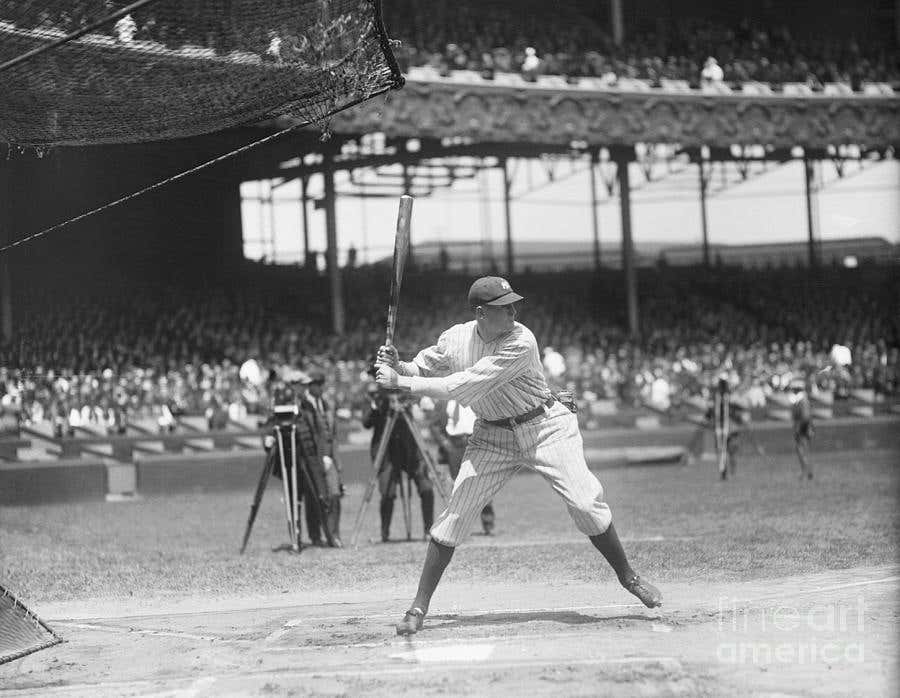 The New York Yankees beat the Detroit Tigers 12-1 in the first game of a doubleheader at Navin Field in Detroit. The game had been tied, with Vic Sorrell tying up the bats of murder’s row for 11 innings. However, in the 12th inning, the Yankees bats woke up and scored 11 runs, as Bob Meusel completes the cycle with a two-run triple, as Wait Hoyt goes the distance for a win. The 11 runs are a record for an extra-inning. The Tigers bounced back to win 13-10 in the second game.

The 1927 New York Yankees may have been the greatest team in the history of baseball, called Murderer’s Row for a lineup that featured Babe Ruth and Lou Gehrig hitting back-to-back. They were well on their way to an encore in 1928 as they held a record of 67-27 entering a late July doubleheader in Detroit. Managed by George Moriarty, the Tigers were in a rebuild mode as they sat at 37-55 in the second division of the American League.

The Yankees had their top pitched Waite Hoyt on the mound, as rookie Vic Sorrel made the start for Detroit. The rookie had the Yankees tied in knots as he did not allow a hit over the first five innings. In the sixth inning, the Yankees finally broke through as Bob Meusel hit a home run with two outs.  Meusel the Yankees' right fielder batted second in the lineup, benefiting from hitting in front of Babe Ruth and Lou Gehrig. Waite Hoyt was just as sharp for New York, allowing two hits over five innings.

Vic Sorrel shook off the home run and continued to roll, allowing a second hit to Hoyt in the eighth. In the ninth inning, Meusel had a double but was stranded on second as Ruth and Gehrig were unable to send in the insurance run. After Tony Lazzeri ended the inning with a lineout, the Tigers came to the plate needing a run to stay in the game. Pinky Hargrave pinch-hitting for Jack Warner have Detroit the run they needed with a home run. Charlie Gehringer followed with a one-out triple but would not score as Hoyt retired Harry Rice and Al Wingo to send the game to extra innings.

Both starters went into the tenth inning, Mark Koening led off with a single but was erased on a double play. In the bottom of the tenth, the Tigers got a triple from Jack Travener, but he was thrown out trying to score when Larry Woodall hit a grounder to third. In the 11th inning, Bob Meusel got a one-out single but was erased when Babe Ruth hit into a double play.

The score remained deadlocked 1-1 heading into the 12th inning. Lou Gehrig started the rally with a walk. Gehrig was forced out at second on a grounder by Tony Lazzeri. Mark Koenig followed with a single. Lazzeri would score the go-ahead run on a double by Gene Robertson. Following an intentional walk to Johnny Grabowski, the Yankees expanded their lead to a 4-1 on a two-run single by Waite Hoyt. Earle Combs singled in Grabowski, setting the stage for Meusel, who added two more runs on a triple to complete the cycle. Now leading 7-1, the Yankees continued their 12th inning assault with a double by the Babe, who scored on a single by Gehrig to make the score 9-1. Tony Lazzeri followed with a double that scored the Iron Horse to make it 10-1. Leo Durocher came in as pinch-runner and scored on a single by Robertson after Koeing went down on strikes for the second out. Grabowski added a double scoring Robertson to complete the scoring at 12-1.

Waite Hoyt grounded out to end the Yankees record 11-run outburst in the 12th inning. Hoyt pitched around a leadoff single and finished off the Tigers in the bottom of the inning, improving to 13-2 on the season with a 12-inning complete game. For Bob Meusel, it was his third career cycle, equaling the record held by John Reilly from the 19th century Cincinnati Reds. Meusel's previous cycles came in the 1921 and 1922 seasons. Babe Herman had three cycles with the Brooklyn Robins and Chicago Cubs a few years later. The only other player with three cycles was Adrian Beltre 80 years later with the Seattle Mariners and Texas Rangers.