YOU HAVE GOT TO BE KIDDING ME. Forget about the Kelenic trade or any other bonehead move during his short tenure. Brodie Van Wagenen should be fired for allowing Chipper Jones' big ugly mug to troll us from the stands of our home stadium along with his son that he named after our old stadium because of all the success he had there. On Opening Day no less! The Mets somehow completely botched a day where every fanbase is happy until the first pitch of the season.

KFC and I wanted to pay the $86 and get cut outs of ourselves with Fire Wilpon shirts place in the seats but figured there would be no way it would make it past the cardboard security team that Jeffy Wilpon hired. Instead, it turns out this is the guy that is checking the cut outs.

There are only two acceptable responses to this move by Larrrrrrrrrrrryyyyyyyyy:

1. Burn those cutouts to a crisp.

2. Place Stu Feiner's cutout in front of Chipper's so he is yelling about eating ass and blowing loads for 9 innings straight THEN burn those cutouts to a crisp as a stoic Frank The Tank stares at them turning to ash.

Obligatory reminder that Chipper Jones was a Sandy Hook truther: 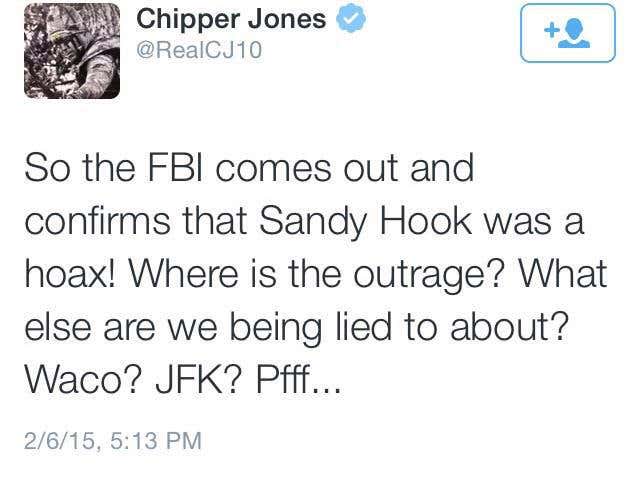 For more Mets pregame talk, KFC and I just went live on We Gotta Believe to talk about tonight's game and will check back in after whatever unfolds in Flushing, either on Friday Night Pints or the We Gotta Believe Twitter.

P.S. If that's not Chipper's son, I take back the ricochet shot at whatever young Mets fan that may be who just so happens to look like the spawn of Baseball Satan.