The Independent - A Pentagon UFO unit will make some investigations public as ex-advisors suggest that “vehicles not made on this earth” were placed in US government storage.

The team will update the US Senate’s Intelligence Committee on its unidentified flying object (UFO) research every six months, The New York Times reported on Thursday.

Publicly named in 2019 as the Unidentified Aerial Phenomenon Task Force, the Pentagon unit succeeded an investigative UFO program that was said to have been disbanded prior to 2017.

One former official, Eric Davis, told The Times that he briefed the US Department of Defense in March about the retrieval of “off-world vehicles not made on this earth”.

The Pentagon consultant and subcontractor said objects he believed “we couldn’t make…ourselves” were discovered during his time on the unit, where he has worked since 2007.

Whilst no crash artefacts have ever been documented in public, Harry Reid – the former Democratic Senate majority leader – told The Times that he “came to the conclusion” that UFO materials were in the government’s possession.

“After looking into this, I came to the conclusion that there were reports — some were substantive, some not so substantive — that there were actual materials that the government and the private sector had in their possession,” said the former senator for Nevada. ...

The Senate committee mandated the Pentagon unit to “standardise collection and reporting on unidentified aerial phenomenon” as part of 2021 spending plans on intelligence agencies.

As the Department of Defenseevery few weeks comes closer and closer to finally revealing that UFOs are sort of, partially, almost, practically, kinda, in a manner of speaking, pretty much, definitely real, my advice is this. You might as well. Now seems as good a time as any.

If ever there was a moment in our history where the human race as a whole would be open to the idea that we have vehicles from beyond the Earth - the literal definition of extraterrestrial - this is it. We've had enough thrown at us in the last six months. The world has thrown some of its best punches at our species and we're still standing, more or less. What's one more reality-alerting piece of news at this point?

I count myself among those for whom the news here isn't that the Pentagon has "off world vehicles not made on this earth," it's that the Pentagon is willing to admit it has "off world vehicles not made of this earth." Something anyone who's done the research has believed for decades. In fact, it's been one of the worst kept secrets in the history of the United States. The DoD managed to keep a lid on The Manhattan Project, but the UFO coverup was too public for word not to get out. Going all the way back to Roswell in 1947. Those newspaper accounts of a crashed UFO with multiple eyewitness statements that turned into a total reversal the very next day: 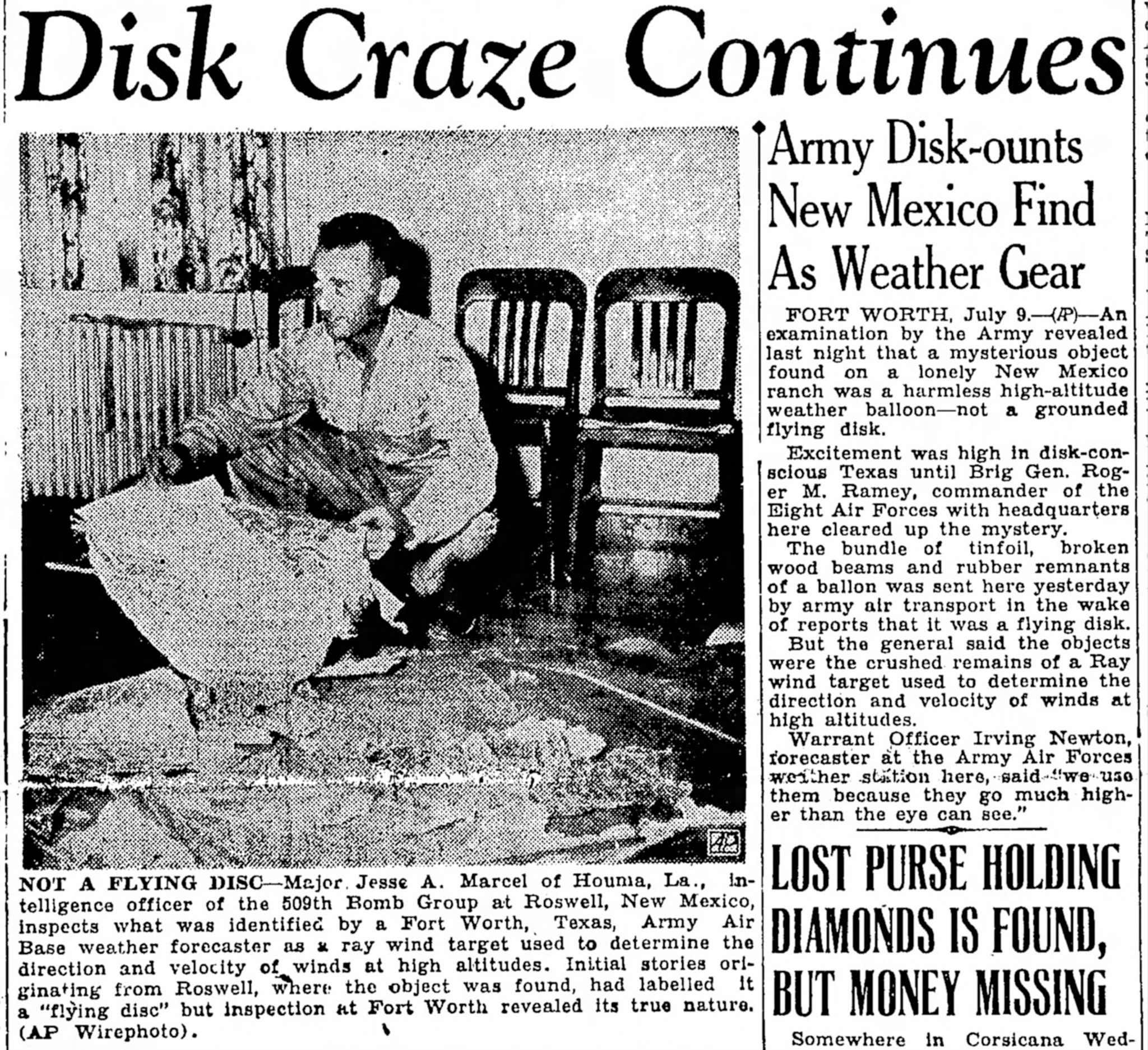 ... only fooled the simpleminded. The people who wanted to not believe the eyewitnesses who saw the occupants of the craft before government officials took them away and coerced them into changing their stories.

But it really hasn't taken much to know the reports were real. Genuine, detailed accounts from some of the most reliable sources imaginable have been all around us. Lt. Col. Phillip J. Corso, who wrote "The Day After Roswell" about how he was personally tasked with reverse engineering the crashed vehicle, and from it we got technology we never dreamed of before, like night vision and silicon chips. "UFOs: Generals, Pilots and Government Officials Go on the Record," from investigative journalist Leslie Kean, who interviewed people with first hand accounts of encounters and those who have researched them for governments around the world. On the record, names and all. And Bob Lazar, who worked in a research facility near Area 51 and, among other things, has revealed the crafts he saw there contained a material we didn't even know exists: Element 115. Which was added to the Periodic Table in November of 2016.

So yes, the fact our government is in possession of vehicles from beyond our world should come as no surprise. Especially to the experiencers and our military personnel who've seen these things in person. Like this base in Afghanistan (cued up to the 0:55 mark):

YouTube - This video was made by the US military in the Kandahar province of Afghanistan in 2011, and then uploaded to the network. The US military refused to comment on it, but yesterday, in response to a public request, Susan Gough spokeswoman for UAP, gave an official response: “I can’t say anything about the origin or authenticity of the video. I have nothing more for you“

Four UFOs appeared over the mountains and released garlands of smaller objects down. Interestingly, to support the US military base, near which these events took place, the Warthog was called, the A-10 plane, which attacked two of the four objects, but when the smoke from the explosions cleared, it became clear that the A-10 attack did not inflicted harm to objects and they didn’t even move a centimeter from their places.

But if/when the decades of denials and coverups end and the truth is admitted to, it will be a world-changing event nevertheless. And I think after what we've gone through, it'll come as welcome news to distract us from how terrible everything else has been.