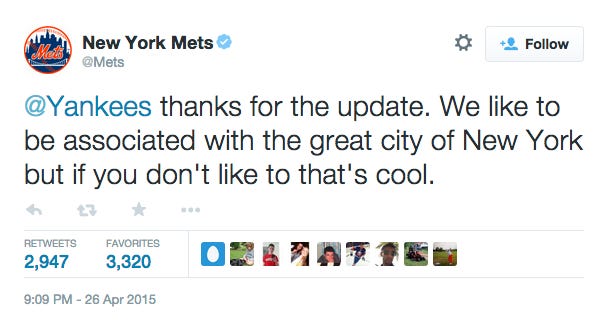 Last night’s Sunday Night Baseball game was terrible. It was the rubber match of the Subway Series and it was just atrocious. The starting pitching was terrible. The game was micro managed by both Girardi and Collins. The broadcast crew was terrible. I mean I know local broadcasts are always infinitely better than a national telecast, especially for Mets fans who are spoiled by Gary Keith and Ron. But this was particularly atrocious. After Campbell’s baserunning mistake I fucking turned on video games instead of watching that dog shit game.

But worse than all of that was the Yankees and Mets going back and forth on Twitter. Whoever runs the Mets twitter needs to be fired. Good Lord what an awful couple tweets. First of all it really is stupid to call the Yankees “NY (AL).” And that comeback was just abominable. That was a 2007-2014 Mets type of tweet. We need some new blood in there firing off some 2015 tweets. Like “Yea we know you’re the Yankees but that bum ass lineup and shitty pitching you trot out there these days aint worthy of that name.” Thats what @Mets should have said. All in all the lamest Twitter trash talk I think I’ve ever seen from both of these teams.