Now it’s time to spend the rest of the day with a boner uptucked in my waistband. That was about as pretty as they come. I know that nobody can out-Forsberg Peter Forsberg, but Connor McDavid is out there attempting to do the impossible. This kid’s hands are so goddamn smooth and it puts my brain in a blender every time I try to comprehend how good he is. I know that Jack Eichel is a great player and I’m sure he’ll do very well in Buffalo, but holy shit would I not want to be anyone associated with the Sabres right now. The FOMO must be through the roof. You’ve got Wayne Gretzky calling the kid the best player to enter the league in the past 30 years and just look at these numbers he’s been putting up in the OHL playoffs so far. 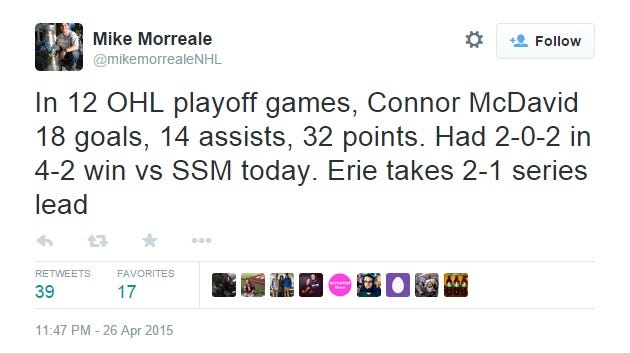 Edmonton has become a joke of a franchise. It’s where the hopes and dreams of superstar talents go to die. But here’s to hoping that McDavid will be the one. It’s going to be fun as hell to watch this kid develop if that team can figure it out. Now run on off to Costco and grab yourself a whole new supply of underwear. You’re going to need them come next year.