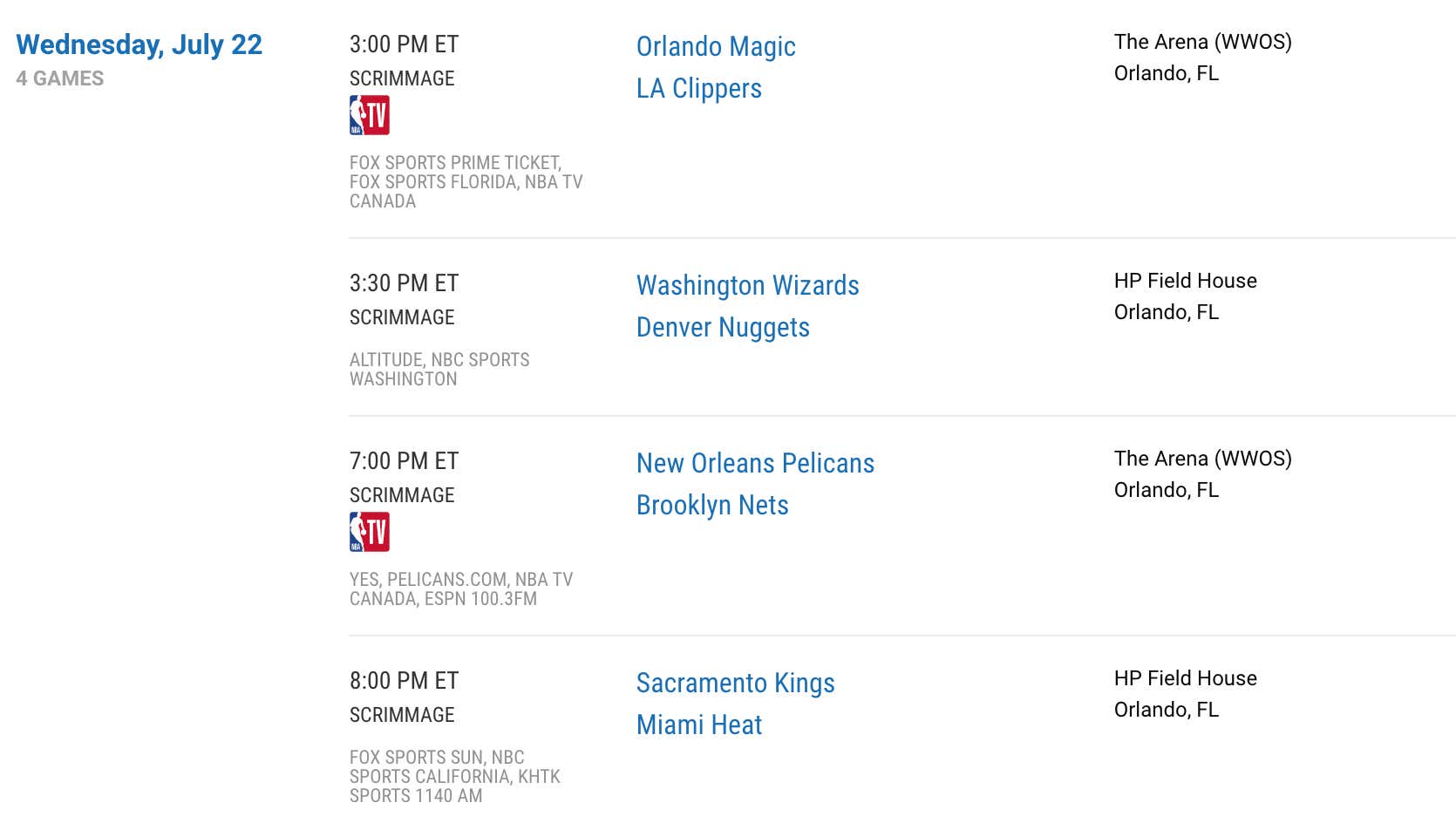 This is it, one more sleep before we get basketball back in our lives. Sure it's scrimmages but who could possibly care? The league announced that all these scrimmages will be on TV so I wanted to make sure everyone was aware of what was going on. No idea if you can bet on these but like I said it's daytime basketball so who cares. This is basically going to be our lives from tomorrow until October and I cannot wait.

These scrimmages will be a little weird, so first catch up on the format 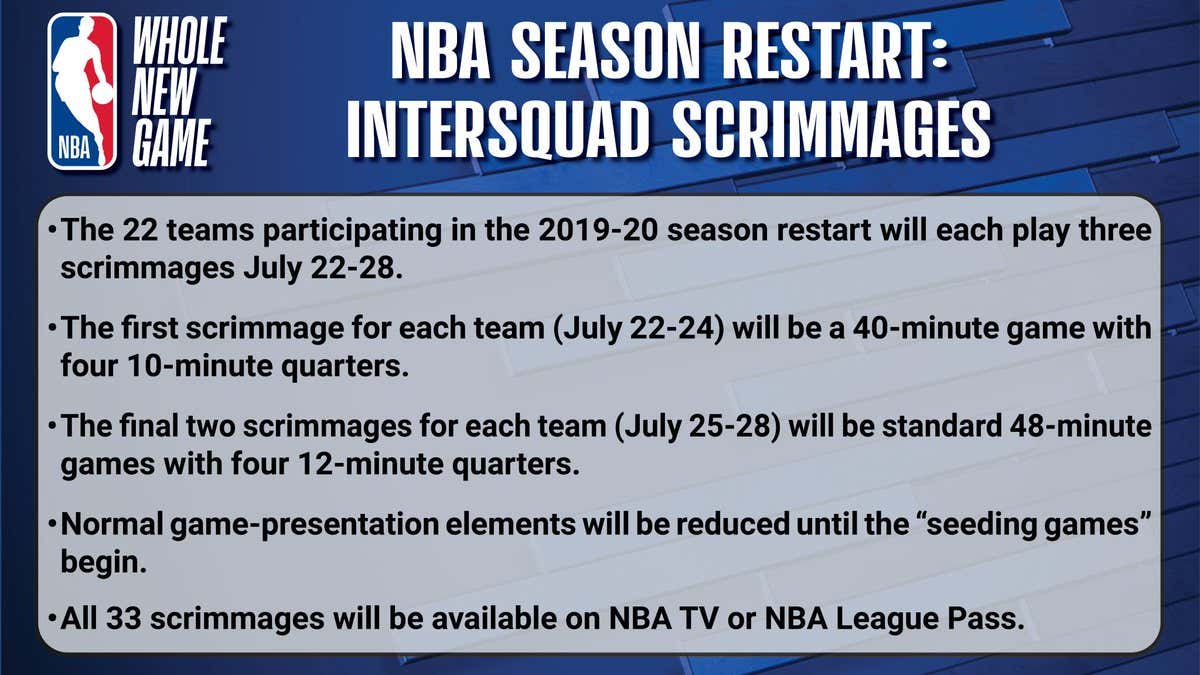 Makes sense to start slow and build your way up. My guess is this will feel very much like the shitty Summer League matchups that nobody attended since they won't be doing much game presentation shit. Again, I couldn't care less. Give me basketball and the sounds of sneakers squeaking and I'll be a happy camper.

So I figured since we finally have some actual sports to talk about I wanted to give some thoughts on things I'll be looking at with each matchup. I imagine we won't see a lot of the main guys play all that much, but there are still interesting storylines to pay attention to as we get this thing rolling. Let's dive in

I think we're all in agreement that we want to see what the Clippers look like after such a long hiatus. I can already see the hot takes depending on how they look and I cannot wait. How does Kawhi move? Is George healthy? Does this team look like a legit title contender? How do they look without Montrezl Harrell in the event he has to quarantine once he gets back in the bubble? We won't get definitive answers to these questions, but we'll have an idea.

For Orlando, they intrigue me. It stinks that Jonathan Isaac isn't playing because people forget what a monster defensive year he was having. But look, there's a good chance for the Magic to get out of that 8 spot and avoid MIL in the first round, and while they wouldn't be favored over the 2 seed, they could give that team fits. I'm interested to see what Fultz looks like as well as Aaron Gordon and Terrance Ross. They trail BKN by just 0.5 games for the 7th seed, so lets see if that defense looks any better.

Pretty simple for me. I cannot wait to see what this new version of Jokic looks like. We've never seen him this trim before so I hope he plays. The Nuggets are still missing some guys so don't read too much into how they look, but you know who will probably play? Bol Bol!!

No way you aren't intrigued by a Jokic/Bol Bol frontcourt.

For Washington, there's no a whole lot. They probably shouldn't even be in the bubble. But hey, for any Wizards fans out there it'll be interesting to see how Rui Hachimura looks. He was having a pretty legit rookie season before injury that I feel doesn't get enough love. I'd just play through him and let him take every shot.

I know it's a bummer that there's no Zion, but the Pelicans are still really interesting as they prepare to make a run at that play in. Obviously I'm interested in seeing guys like Lonzo and Brandon Ingram, especially Ingram who was having a breakout season. The dude wants a max extension and outside of Zion might be their most important player. Remember how good he was shooting from deep before the hiatus? I'm talking 38% with a career high 2.4 3PM on 6.3 attempts. I want to see if he still has that in his arsenal.

I'm also curious about how their defense might look, because if they can't defend they aren't going to catch MEM.

Brooklyn is sort of in the same boat as the Wizards, they barely have a team. But you're damn right I'm excited to see Jamal Crawford play. He's waited all season for the opportunity so let's see what you got. I'm also interested in Caris LeVert since he's going to go back to that #1 option role. He thrived in that last year in the playoffs and his success is important for a lot of reasons. Especially if they are going to be looking for a third start this offseason. The better he plays, the better his value is.

The Kings are a bit of a disaster at the moment. De'Aaron Fox has a sprained ankle, Marvin Bagley hurt his foot and got an MRI, there's not a whole lot of excitement around them right now. But you know what's fun? Watching Bogdan Bogdanovic play and Buddy Hield shoot. Those are things that should happen tomorrow.

For MIA, there's a bunch of stuff I can't wait to see. They fancy themselves contenders, well let's see it. Jimmy Butler can't stop telling people how hard he works out so I want to see if his shot improved at all. He's a gamer and someone you want in your foxhole, but his efficiency can be spotty at times. Especially from three. I'm also interested to see Tyler Herro and Duncan Robinson and if they still have their lights out shooting touch. Those two are going to be key for the Heat if they want to make a run, but neither have played 1 second of playoff basketball. I also am curious if MIA will unleash any of their zones, something that they love to do and makes them tough.

There's a strong chance I'm overly excited about these scrimmages, but whatever. We have waited 132 days since we've last seen NBA basketball. Tomorrow that ends and the craziest playoff run of our lives begins. One more sleep.