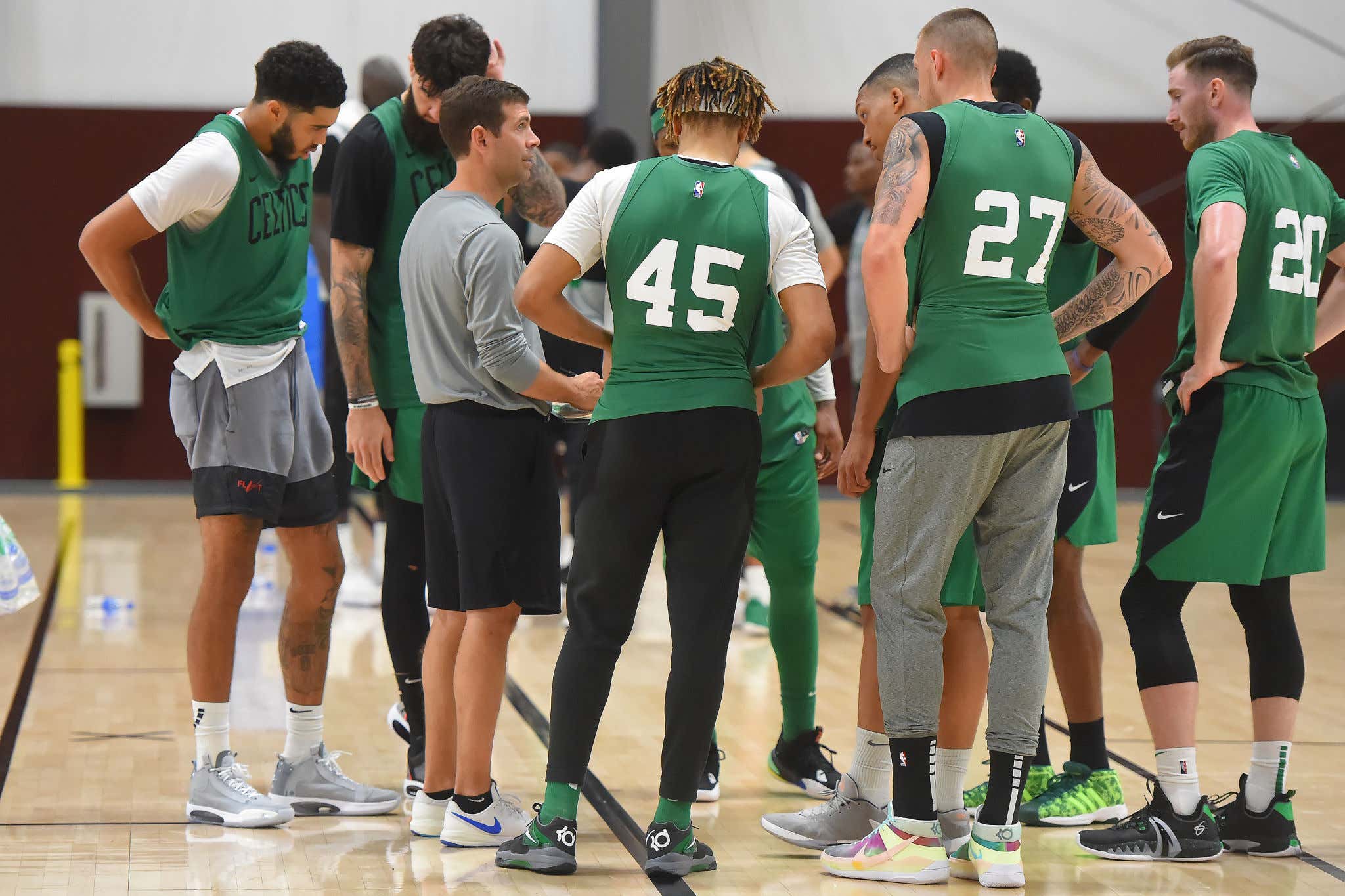 Can I be honest with you guys for a second? It's making me a little uneasy how often I'm seeing pundits talk about how they love the Celtics chances in the bubble. It's one thing for me to do it, I'm a glass of Celtics Kool Aid half full kinda guy. But the more and more I see pundits and pieces written about this team and how much people love their chances, I feel like it is my responsibility to also talk about the other side of the pillow. This team is not perfect. Farrrr from it. That's the beauty of this website, I can say whatever the hell I want about this team whether it be positive or negative. We've spent some time talking about all the reasons why this team might do well in the bubble, but nobody at least that I can tell is willing to talk about why they might not. I feel like it's my obligation to give both sides of the story, even if it's not all positive. As of this moment my voice has not been bought. Now, full disclosure, if the Celts were to hit me up and invite me to the bubble on the one condition I only blog positive things, that will change. I don't care what you think about that. I can be bought and I will regret nothing.

But that hasn't happened yet and I feel like with all the positive stories and takes floating out there on TV and the internet, it is my obligation to even things out. The last thing I want is the Basketball Gods to work against this team because they start believing their own hype. If nobody else is going to relay the facts that might bring them down to earth then I'll be the one.

Fine, I will. Let's get started with a few things on my mind.

I want to start with Kemba. For the most part his first season in Boston was everything we as fans could have hoped for. But what I can't look past is how poor Kemba is to start off games. It's real. Of the top 4 first quarter scorers on this team (Tatum, Jaylen, Hayward, Kemba), who all play at least 9 first quarter minutes and take at least 5.0 FGA, Kemba is by far the worst shooter at 41/35%. In games the Celts lose, Kemba's supporting a 104.6 Ortg and 120.8 Drtg in the first quarter. You're lying to yourself if you don't think this is a potential problem as team's defenses will be tougher in the postseason. In wins? Kemba's rating splits are 113/104. The issue is very similar to what we've seen from other small score first PGs. When they start slow offensively it impacts their defense and they do more harm than good. Add to it the uncertainty around his knee and how that will impact him offensively, it's OK to be worried about how Kemba's starts will impact how this team performs.

My next truth bomb that you don't hear talked about a lot is the fact that this team straight up stinks defensively in the clutch. It's not just this season either where they rank 19th in clutch defense. Last year they were 29th. It's why they are 10-11 in games decided by 3 points or less over the last two years (5-5 this year). Guess what the playoffs is full of? High pressure close games. We have not seen this team prove that they can stop anyone on the other end when things get tight. Offensively they have no issue, ranking 6th in clutch offense as a team this year. But the playoffs are about defense and getting crucial stops. How many times have we seen this team go back and forth in high pressure situations where Tatum or Kemba has a huge bucket only to immediately give up points on the other end? That's concerning.

One thing I think we can take to the bank is opposing defenses are going to do everything they can to take the ball out of Kemba's/Tatum's hands as soon as they cross half court. It's most likely going to come with a hard double, which will require the Celts to anticipate that and move the ball. Which brings me to catch & shoot scenarios, something this team is very unproven with.

They rank dead last in catch & shoot situations at just 21.5 a game which means they also average the fewest catch & shoot points at just 23. In terms of FG% and 3P% they rank 20th. Nothing we've seen so far suggests that when defenses go with this strategy that the Celts offense will be able to adapt, at least from a shooting standpoint. Maybe they find lanes to drive and it won't be an issue, but I keep thinking back to the ATL series w/ Isaiah. Teams took the ball out of his hands and nobody could hit an outside shot.

When talking about the flaws of this team, you'll hear a lot of talking heads point to their frontcourt and lack of size being an issue. This isn't really true. The Celts defend the post/paint as well as any contender. They are 3rd in opponents points in the paint, 6th in blocks etc.

Their issue is more being sneaky bad at defending quick, scoring guards. That is confusing because of guys like Marcus Smart, Jaylen Brown and Tatum, but their perimeter defense has proven to be spotty. Think of their potential playoff path, there are some legit guards that could be an issue. The IND pairing of Oladipo/Brogdon, MIA's Butler/Nunn, TOR's Lowry/VanVleet etc. While he may be a first team All Defense, Marcus Smart has struggled matching up with score first guards. Kemba's defense is what it is. So much attention is being paid to how the Celtics will handle size, but I'm more concerned with how they defend the perimeter. If they can't stop teams at the point of attack, then it's not going to matter what their post defense is. They'll have to rotate and guys will be left open for easy buckets.

If you've watched this team play you know that the second quarter is one of the most painful experiences you can have as a Celtics fan. They are just so, so bad. They're 15th in second quarter scoring and 29th in second quarter FG% combined with 28th in 3P%. So gross. Now I know what you may be thinking, that this is when the unproven second unit plays and that won't be an issue in then playoffs with a shorter rotation. I'm here to tell you that is not exactly true.

If you separate things to just the starters second quarter production, it's not all that better. They're 25th in FG% and 3P%. Celtics starters play the 10th most second quarter minutes in the league, so my guess is once the playoffs roll around that would only go up. Don't ask me to explain why this is, I just know what I see day in and day out in watching this team play and that is for whatever reason they cannot shoot for dick once things get to the second quarter.

I can absolutely understand the excitement surrounding this team as we prepare for this bubble experience. Hell, I write basically a blog a day about something that has me giddy about this team returning to action.  But it's important that we also talk about their flaws. Credit to me for being honest. There are just as many warts that exist that could result in an early exit from Orlando as there are reasons why they could make a deep run. I think it's OK to look that things objectively and say there are areas that could come back to haunt this team.

Hopefully this inspires other hot take artists and pundits to start to talk about their flaws so they feel disrespected, because I want the underdog mentality over the favorite mentality 100/10.