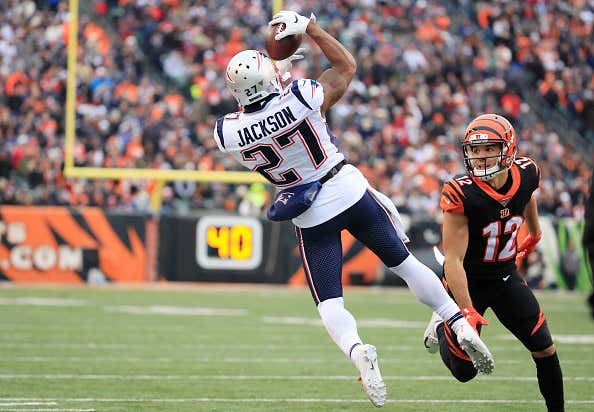 One thing I've been coming across a lot of this summer when I'm talking about the Patriots with anyone is that, on the rare occasion anyone is talking about anything other than the quarterback situation, is this sort of exaggerated negativity about the defense. Mention that they were the No. 1 defensive unit in the league last year and you get this reflexive response where the listener either shakes their head or gives you that look that Angela gave Kevin every time he opened his mouth in Dunder-Mifflin.

In a way, I get it. It's a cognitive bias. Specifically, it's the Recency Effect, defined as "Recent events are easier to re member, and can be weighed more heavily than past events or potential future events." We mostly remember them getting Kool-Aid Manned by Derrick Henry in the playoff game. Their inability to make a stop on the final drive of the regular season against Miami, costing themselves a bye week. Or that Baltimore game that was the fulcrum that made their seesaw go from high to low, when they made it a 24-20 game only to get ragdolled by the Ravens for  touchdown drives of 8:09 and an astonishing 9:35.

So no one wants to hear about the numbers. Even if they led the league in practically every major defensive category. Fewest points. Fewest yards per play. Fewest 1st downs. How they were number two in takeaways, fewest yards per pass attempt and passing yards allowed. Or even the fact that they were the only team in the NFL with more interceptions than touchdown passes allowed. But a TON. Almost two-to-one, with 25 INTs to just 13 TDs. That is an incredible stat in this Arena League that Bill Polian's rules created.

I bring this all up today because ESPN (paywall) has a piece where they asked executives, coaches, scouts and players around the league to rank the top 10 players at 11 positions. And one had this to say about JC Jackson:

JC Jackson. At most, the second best cornerback on the club, behind the Defensive Player of the Year with a 99 Madden rating. Stephone Gilmore. A guy who had just about 60 more snaps than Jonathan Jones (682 to 619). A guy who maybe wouldn't have even played that much if Jason McCourty wasn't battling injuries all season. And to at least one expert in the field, he's among the best corners in the league.

And this anonymous executive is not wrong. According to Pro Football Focus, Jackson led all corners in passer rating when targeted, and it wasn't even close. He was at 37.0. Tre'Davious White was at 46.3, Richard Sherman had 46.8 and Gilmore clocked in at 47.4. Plus he gave up one touchdown, with five picks and five PBUs, a tidy little passes defensed-to-scores allowed ratio of 10 to 1. Not a bad season for a 24-year-old undrafted free agent with just 29 games of career experience.

All of which brings me to another point. And it's to counter this old chestnut that keeps getting planted and sprouting up oak trees:

Yup. GM Bill continues to screw over Coach Bill with his terrible personnel moves. Remember when we were never going to recover from the loss of Malcolm Butler? How they should've matched the five years and $61 million the Titans paid him because UDFA cornerbacks who turn themselves into one of the best in the league don't grow on trees. How were they ever going to replace a guy like him? They come along once in a lifetime. Or, in GM Bill's case, twice in four years.

And therein lies the fallacy of the "Bill is a Bad GM" crowd. They carry in their heads a Wikipedic knowledge of all the draft picks that don't work out among the very many draft picks they acquire every year. While ignoring the major successes found in the later rounds of the draft, free agency, trades and the nuggets of UDFA rookie gold they pick up, like Butler and Jackson.

Belichick picked up Trent Brown for nothing. One season later, he's signing the richest deal in the history of offensive linemen. He took Trey Flowers with the 101st pick in 2015. And at the end of his rookie deal, Flowers signed with Detroit and was the highest paid player in 2019, behind only Matt Ryan. And in a couple of years, I have no doubt that Jackson will hit the open market and be making Byron Jones/Marcus Peters money somewhere else. While GM Bill let's him walk, wishes him well and finds himself the next great obscure player who'll play for him for four years before fleecing some other team.

I just realized I went from talking about the Pats defense to JC Jackson's greatness to a defense of Bill Belichick as a team builder. Like a triple scoop cone of Patriots talk to cool you off on a hot July day. That is the Old Balls Patriots coverage difference.