You may remember back in early June when Jeff Lowe trolled the entire internet with this food map:

Some truly great trolling done here. The talent Jeff Lowe has is enormous.

Over on the social media team, we have continued on with this trend:

Now, if you see the post by us and take a second to look at the comments and/or replies, you will know it's a joke: 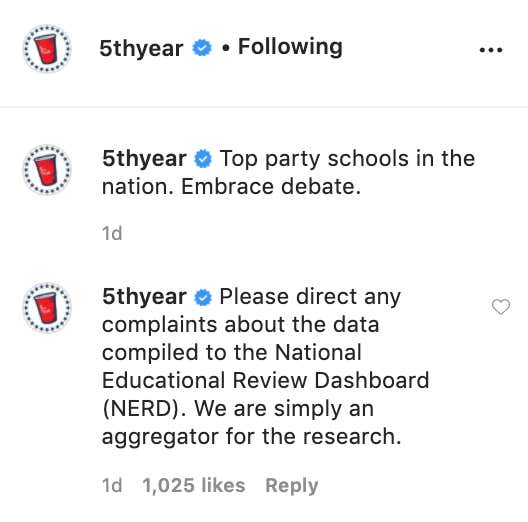 However, some people do not see the comedy/don't have a brain and find themselves in a situation where they think this data is actually real. Imagine thinking that data shows the biggest party school in Oklahoma is Oklahoma Baptist. I had not even heard of the school until today!

There are over 2000 quote tweets on this tweet, including this one from Rodger Sherman (who is usually on top of his stuff, so the fact that we slipped this one past him is an accomplishment):

This video has close to 500k views, 36k likes, and another 3k comments.

Some may find this way of going viral a bit tacky, but I think it's great stuff. FIT as the state of New York's top party school? Brown as Rhode Island's? Compiled by National Education Review Dashboard (NERD)? Funny, funny stuff. The key to this bit is to just not over do it. Throw it in there every once in a few months. I think we're gonna do that and just watch the TikTokers get mad every single time.