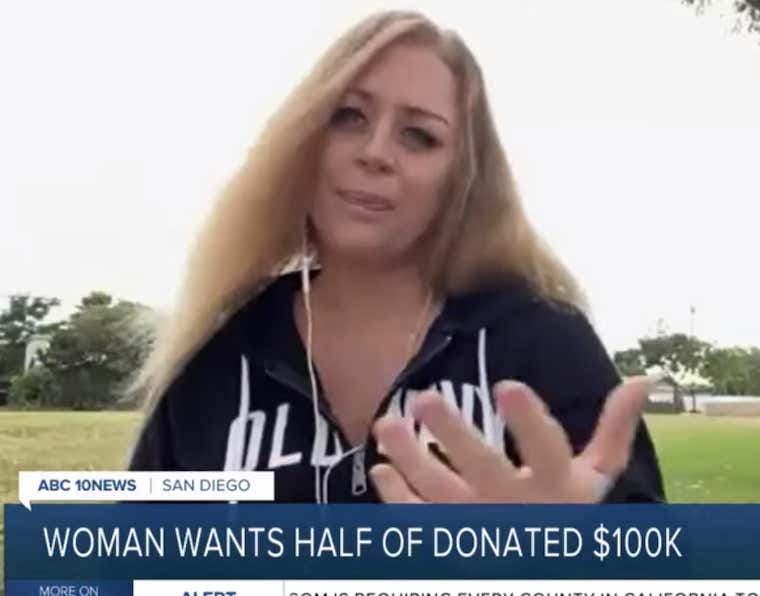 Source - A San Diego woman who tried to shame a Starbucks barista for enforcing the government's mandatory face-mask rule says she wants half of the $105,000 in tips that supporters raised for the employee on GoFundMe.

On June 22, Amber Gilles posted a picture of Lenin Gutierrez on her Facebook page, writing: "Meet Lenen from Starbucks who refused to serve me cause I'm not wearing a mask. Next time I will wait for cops and bring a medical exemption."

The post, which has since been taken down, was shared widely, and many people criticized Gilles.

A GoFundMe started by Matt Cowan, of Orange County, California, to raise tips for Gutierrez had raised $105,450 before Cowan ended the campaign more than a week ago.

Gilles this week told KGTV, a local ABC affiliate, that she'd been speaking with lawyers about pursuing a lawsuit to get half of the money raised for Gutierrez.

"I've been discriminated against," she said. "I'm the one who's sick."

She said that because the lawyers were expensive, she started her own GoFundMe to raise money to pay for them. Insider could not find a GoFundMe account associated with Gilles on Thursday.

The video of her in the store has since been scrubbed from the internet, but even without having seen it I can confidently say that Amber Gilles is an absolutely terrible person. I mean imagine berating a high school barista for trying to do his job? A job that probably pays him eight bucks an hour all because you don't want to wear a mask for the two seconds it takes to pick up your coffee.

Now imagine giving an interview to a news station and saying this...

For those of you who didn't watch, the reason she says she can't wear a mask is because she had an ovarian cyst in 2015. I swear to God you can't make this stuff up. She then went on to say that masks give her acne and she's entitled to half of his $105,000 because she was discriminated against.

The worst part is, the money she's trying to steal Lenin was going to use for school and charity.

Gutierrez has already received the money from his GoFundMe campaign. In a video posted on the fundraiser's page, he said he planned to use the cash to study kinesiology at Cal State Fullerton and pursue his dream of becoming a dancer. He said he also wanted to donate some of the money to charity.

You can hear him talk at length about everything that's happened here.

If there's one person that needs to be canceled in 2020 it's Amber Gilles. The good news is, Lenin is lawyered up incase Amber decides to actually go through with the lawsuit although I don't think she will. Best of luck to Lenin. It's going to be pretty awesome starting college with a six figure bank account. Try not to blow it all in one place.