Deadspin - After everyone watched ESPN reporter Britt McHenry channel Regina George at a towing company employee, she walked back her behavior. She apologized on Twitter, and the Worldwide Leader dropped a one-week suspension on her. When something like this happens, other, smaller items usually emerge to reveal more about the person; what we’ve gleaned from McHenry’s items is that she seems to suck.

Item: We received an email from someone who credibly claims to have been a former classmate of McHenry’s at Northwestern:

Overall she was just very stuck up and stuck on herself. She would barely associate herself with most of us in the program. Most of us lived either in Evanston or not far from it in Chicago and there would be times I’d see her outside of class and she would just walk past me on the street without speaking.

Item: We were sent a photo of McHenry posing with a Sarah Palin campaign sign—note the slogan—along with a photo of the one-time vice-presidential candidate. 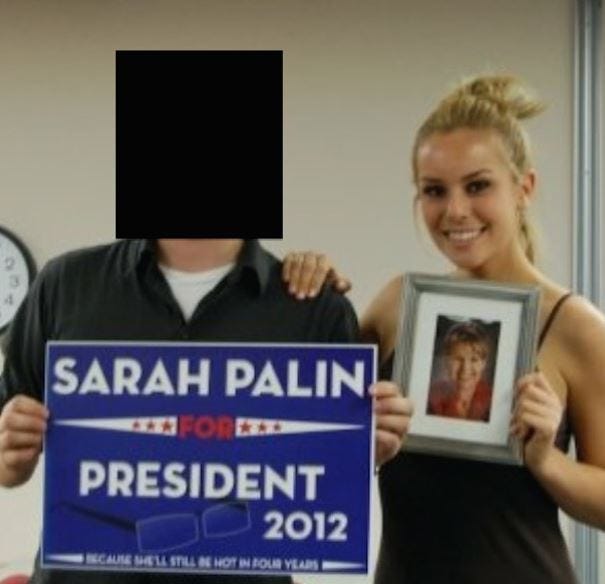 Item: Once the video blew up, “someone in McHenry’s camp” told MSNBC that the tape was edited. The interesting thing here was the existence of her “camp.” (For perspective, note that neither Bill Simmons nor Keith Olbermann has a “camp.”)

This article from Deadspin is a couple days old but I missed it because I’m vacationing in the Italian Riviera right now.  Anyway I just couldn’t let this slide.  First of all I can’t even believe we’re still talking about Britt McHenry, but after reading Samir Kalif (AKA – The worst writer on the internet) article I understand why it’s such a big story still.  It’s because 95% of bloggers and writers are losers like Samer. Kids who got stuffed in lockers in high school and college.  The kids who played Dungeons and Dragons on the weekends when pretty girls like Britt McHenry probably partied with the hockey team.   They hold a grudge for years and years and they wait till the pretty blonde screws up and then they pounce.  That’s exactly what’s happening here.

Listen I’ve said from day 1 I don’t think anything you say in a tow lot should be admissible in a court of law or as a judge of your character.  It’s like judging somebody for what they say while on hold with Comcast.  Not to mention the fact the tape was CLEARLY edited to make Britt look bad.  Not to mention the fact all the Yelp reviews of the tow truck place are brutal and the fat bitch she yelled at is constantly mentioned as being a cunt.  But none of that matters for guys like Samer Kalaf.  This is his chance to get even for never having the balls to talk to any pretty girls at UNH.   He’s gonna dig up every piece of dirt he can find on Britt McHenry to make her pay for being the hot cool girl.  So what did he find?   What was so evil about Britt that he had to write an article with a clickbait headline that says she has a history of being rude as hell?

OH MY GOD BRIT!  BOOM ROASTED!   I guess I was wrong about her the entire time. I mean what an asshole Britt is!   Samir Kalif just proved it with those 3 points.  SERIOUSLY GET THE FUCK OUT OF HERE.  This is everything that is wrong about Samir Kalif and Deadspin..  They are trying to ruin somebody’s life for the sake of a few pageviews. Riddle me this Samir.  If Britt McHenry is such a stuck up asshole why is she best friends with Nate?   Game, set, match Pres.

Bottomline is there are always people who hate on hot girls.  Guys who got rejected or ignored and girls who are jealous.  This story has nothing to do with Britt McHenry anymore.  And I know people are gonna say this shouldn’t count but it does.  The fact that Britt loves Barstool makes her cool. There are so many snooty, feminist stuck up hot chicks and she ain’t one.  She’s funny and has a sense of humor.   So let the moral police fucking hang her from the rafters and pretend nobody freaks out at tow truck lots.  That’s Deadspin and twitter eggs.  So fake righteous it hurts.