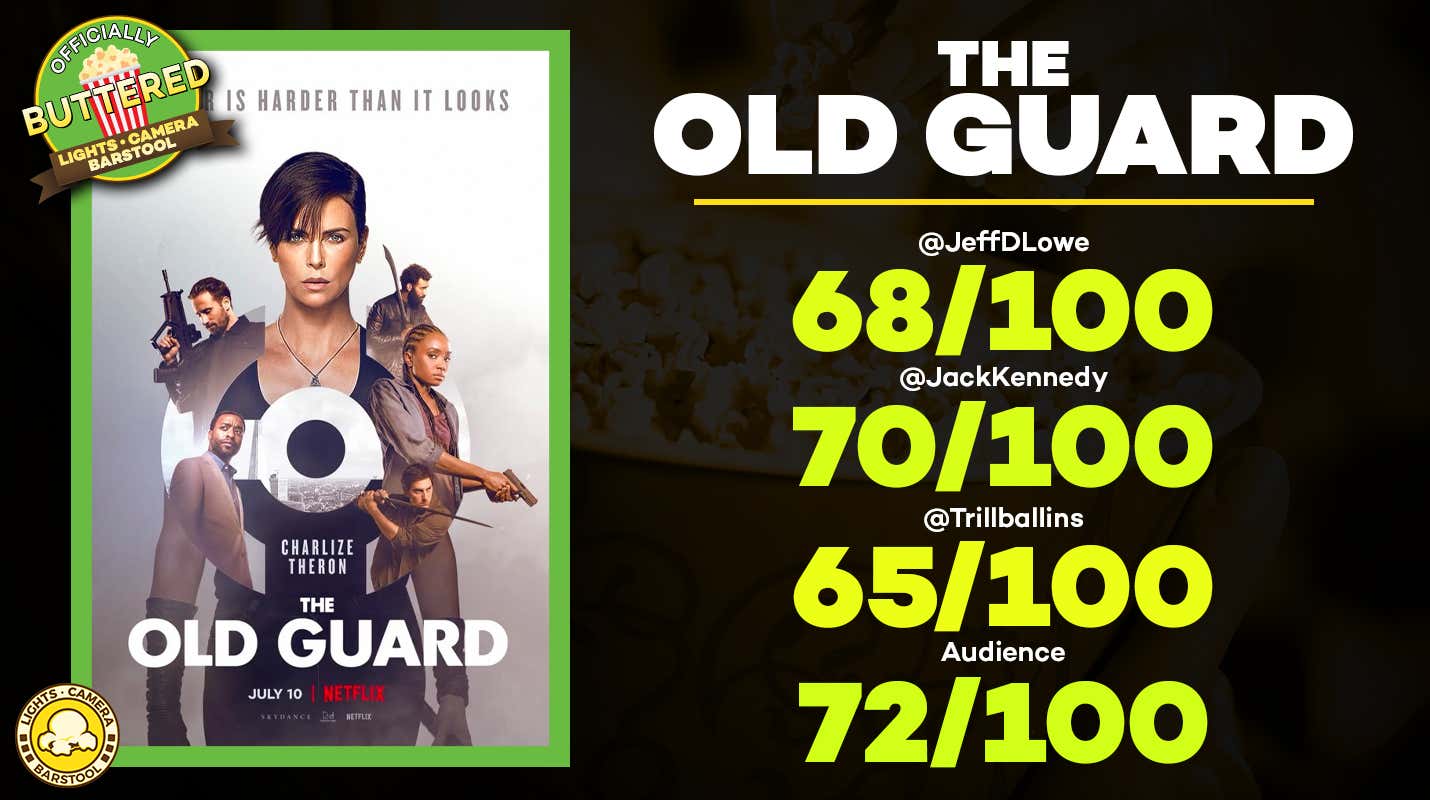 We have never really railed on a movie before because of a soundtrack, but there is a first for everything...

A group of mercenaries, all centuries-old immortals with the ablity to heal themselves, discover someone is onto their secret, and they must fight to protect their freedom.

JeffDLowe (68/100): An intriguing concept and solid cast help make 'The Old Guard' an enjoyable Netflix watch, despite some corny dialogue and moments, but the movie is severely hurt by one of the most out-of-place movie soundtracks you'll ever hear. The music, albeit not bad on its own, is jarring in nearly every scene and screams of a failed attempt to appeal to a younger demographic.

We've had some great adaptions of comic books over the years outside of the Marvel and DC space, whether it be 'Kick-Ass' or something like 'Kingsman'. Honestly, 'The Old Guard' is a fairly decent attempt at a successful adaption of a creative comic book concept, and many people will enjoy the movie. Even if the script is a little uneven and, at times, over the top, Charlize Theron never really mails in a performance. The concept is somewhat similar to the X-Men, but still feels fresh, with some really awesome flashback sequences and character-building moments. I'd even go as far as to say I wish they had focused a little more on the lore of the characters (no spoilers) as opposed to their "new" missions.

But, again, the movie has a major problem: the soundtrack fucking stinks.

Some of these songs are great songs but do they have a place in this movie? Not at all. There are moments in the movie where you'll ask yourself if Spotify accidentally started playing on your phone. I've noticed this with Netflix movies, where they have a ton of current, or recent, billboard hits, but the tone of the movie just did not mesh with the music selection.

It takes a lot for a soundtrack to throw me off when watching a movie, but 'The Old Guard' did just that.

In the end, it's on Netflix, it's well made, and a fun piece of the action for the summer. I'd love to see more around this story and comic book explored, but my word do they need to reign it in on the music. Just go with a classic score, dump the pop hits!

KenJac (70/100): This movie is incredibly disappointing because it took some solid footage and concepts and ground it into an unremarkable mess on the editing room floor. The action scenes you’re promised are delivered, but they’re drowned out by EDM musical cues. The concept of immortal time fighters intrigues you but is forgotten when line after line of corny dialogue is spat out in a weird attempt at characterization. There is plenty to like in this movie, but watching it constantly veer into avoidable potholes is a very frustrating experience.

Charlize Theron is one of the top 5 badass action actors/actresses working right now, and she really delivers on the physical aspect of the role. Her character, Andy, is so poorly written with the most tired “Yea, I’m cool cause i swig vodka from the bottle and I’m very pessimistic!” tropes that I just sort of felt bad for her. The same goes for the rest of the cast really. I was excited to see Harry Melling (Dudley from Harry Potter) in a villainous role because I thought he killed it in Buster Scruggs, but he was sort of given the short end of the stick as well. The actual art of acting was really a non-factor overall for this movie.

From a technical standpoint, I really enjoyed the fight scenes. This definitely falls into the category of the new-wave action movies that put an emphasis on fight-choreography which I always appreciate. The problem is that every one of those fight scenes was drowned out by annoying electronic music. Not the cool kind that compliments the atmosphere like the club scene in ‘John Wick’, mind you.

More like incredibly out of place and jarring tunes that don’t fit the sequence. I never read the comic series this is based on, but I was excited about the concept of this movie because I’m a big fan of the theme of immortality. However, it didn’t feel totally fresh. It felt like someone spit-shined ‘Highlander’ and added more guns and some EDM.

It’s a decent movie with a comprehensible plot and solid action, which is enough to get me to a score of 70. The easily avoidable mistakes in dialogue and editing take it down to being so much less than what it could have been, though.

--
After all of that, the movie is actually Officially Buttered as it clears the 69/100 average threshold following the ratings from Trillballins and our audience. We did an in-depth review of the movie on our podcast Lights Camera Barstool, and you can listen to that here.