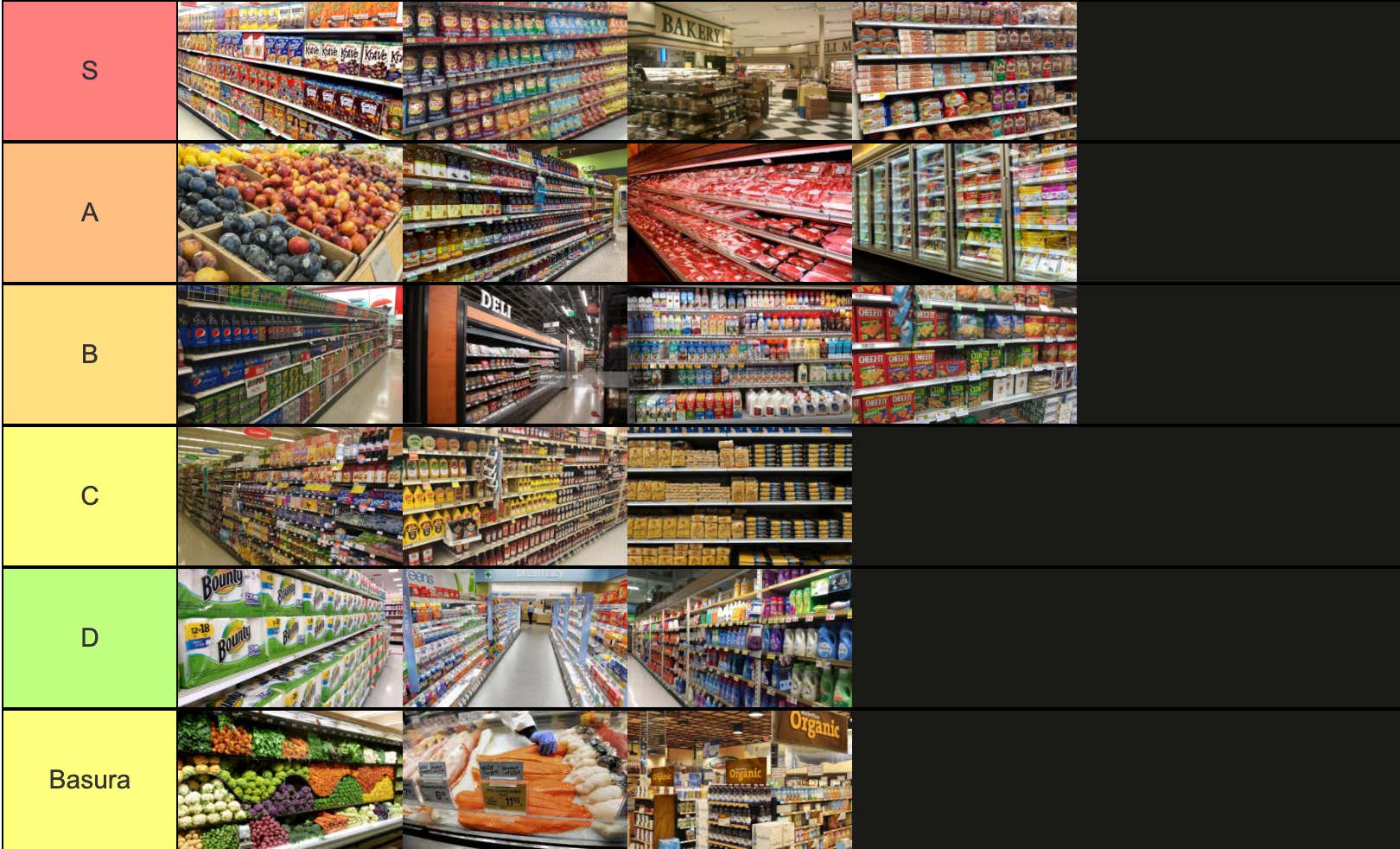 I didn't get into the tier business to make friends. That's not why I'm here. I'm here because it pays the bills. It puts literal food on my family's table. That's why I tier. You might not like it, you might not agree with it, but those are both your problems. Because my tiers are the tiers analysts and scientists will be using for centuries, long after we're all gone, consumed by the very Earth we inhabit. It's bigger than me. It's for humanity. But like a high school math test, I've gotta show the work. It's not enough to just have the correct answers anymore. You have to explain how you got there. So, this is the grocery store aisle tier, explained.

I'd be shocked, genuinely taken aback, if anyone had a single qualm with this tier. The cereal and chip aisles are far and away the most aesthetically pleasing aisles in the entire store. The way those colors dance off the fluorescent lights is one of the great natural wonders of this planet. Not to mention those aisles hold some of the most delicious treats one can stumble upon during a trip to their local grocer. As for the bakery and bread, what is there really to explain. If you don't like the bread aisle you're the problem here. The bakery has everything from fresher bread to cakes and pies and cookies. Quiet as it's kept the bakery aisle could stand alone at the top of this mountain.

Fruit is delightful. Anyone who knows me knows I'm a big time fruit fan. Even the worst fruits have their place in society. Except for those fucking bad apples, I can't stand those assholes. Anywho, the fruit aisle is elite, just a step below the S Tier. Handcuffing to fruit comes the juice aisle. Can't have juice without fruit, that's a Snapple fact for ya on a Tuesday afternoon. Meat??? What a glaring omission from the S Tier. Who is the jackoff who even compiled this tier in the first pla- oh yeah. The meat aisle is solid, certainly a top tier aisle but not the toppest tier. Too many people standing in the fucking way acting like it's their first time buying food to be in the S Tier. But I want it on the record it's the people's fault not the meat's. Meat never harmed anybody. And the frozen food aisles are like taking a vacation in the middle of the store. It's an entirely different world over there. Like wandering into Siberia without even realizing it. But there's ice cream there, and ice cream is tremendous. I think on that we can all agree.

I don't want to get too ahead of myself here but there are a lot of good aisles in a grocery store. Going to the grocery store is one of my favorite activities that are tied to adulthood. No parental there to tell me I can't fill my cart with pastries and meat and soda pop. Truly the king of my own realm once I wrangle my cart and pass through the threshold of those automatic sliding doors. It's a lot of responsibility. You can be whoever you wanna be in there. Fill up that basket however you like, hit the register, assume the cashier is silently judging you for taking full advantage of the 4/$11 deal on cases of Mountain Dew, and then be on your merry way home where you will gleefully place away all your new purchases before sitting down, opening up Doordash and spending even more money on food because you're a lazy piece of shit. Does that diatribe answer why I have any of these fine aisles lower than the ones above? No, no it sure doesn't. Moving on.

Solid aisles. Not great, not terrible. Real glue guy of an aisle. You get your rices, your ramens, your pastas, your catsups, your mayochups, you toss them in your cabinet and they're there when you need them. Ol' reliable aisles. Staples to your pantry. They're not the flashy, diva wide receivers commanding huge pay days along with the glitz and glam of a Hollywood lifestyle. They're in the trenches. They're setting a block springing the running back for a huge gain. Your team is shit without this aisle. Utter shit. You wont sell a ton of jerseys with this aisle, but that's not what they're there for. They know their role and always have a spot on the team because of such.

These aisles are more boring than bad. Paper goods became the hottest aisle of 2020 when, yanno, everyone lost their fucking minds and loaded up on toilet paper and paper towels like it was December 31, 1999 all over again. We are, without a shadow of a doubt, the dumbest species on this or any other planet. But yeah, nothing special about these items. The thing that separates C Tier from D Tier is that C Tier is edible. Sure, you can ingest plenty of the items on the cleaning supply aisle, but most doctors wouldn't recommend it. Not that we listen to doctors anymore, those stupid nerds, but the point remains.

I can hear the grumbles and groans from Big Seafood already. Sorry boys, your aisle literally stinks. We're lucky it doesn't ruin the entire store with that odor. P. U. I can't even point to the lobster tank being cool because I don't even know if that's a national thing or just a New England specialty. I can't fathom why Omaha, Nebraska, grocery stores would have giant lobster tanks overflowing with rubberband clad crustaceans, so I'm going to assume I'm right in assuming that this is a regional thing. Which only further backs my ranking of it just being an area of the store that smells like fish. Hard pass. Then there's the vegetable aisle, which they put right next to the fruit aisle for reasons I can't understand. Put the vegetable aisle out back, near the dumpster where it belongs. That's what I always say. The best vegetable is shit compared to the most middling of fruit. You've gotta jump through six different hoops to get vegetables to be slightly palatable. Fruit is served as is, doesn't need any gussying up. In conclusion: fuck vegetables, all my homies hate vegetables. The organic health food aisle can eat my shorts. I know they'll ask if my shorts are biodegradable or can cast a shadow or some shit before they indulge, but if I have to see that wack ass cereal with an adorable puffin on it one more time, sullying the good name of puffins for no goddamn reason, I'm going to start punting boxes to the moon.