One of my favorite scenes in Casino happens at the beginning of the movie at San Marino Italian Grocery: 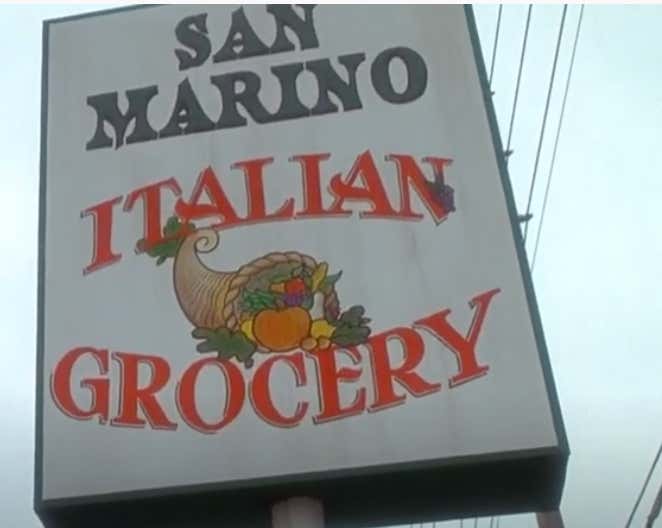 At the back of San Marino, all the mob bosses from the midwest would meet.

I can practically smell the food every time I watch the scene.

As we know, life imitates art. A Chicago mobster was nailed for running a gambling operation out of his own San Marino Italian Grocery store:

SOURCE-Reputed Chicago bookmaker Dominic (The Bookie Butcher) Poeta was indicted by the feds for running a sports betting operation and filing a false tax return this week, 12 years removed from being named in a federal civil lawsuit which claiming he accepted close to a million bucks in gambling debts owed to him.

Poeta, 63, owns Poeta’s Italian Market in Highwood, Illinois. He resides in Highland Park and faces up to three years in prison if convicted in his current case.

I gotta say, "The Bookie Butcher" is one of the greatest nicknames I've ever heard. That being said, being a b**** is very bad and as you know, completely illegal. We only support legal gambling around here.

My understanding is Highwood, Illinois is a suburban town just outside Chicago. It has a population of just 5k.

In 2008, Poeta was accused of taking $870,000 in checks for payment on bets from Windy City swindler Adam Resnick. When questioned by Chicago Tribune columnist John Kass, Poeta claimed he was simply a “go-between,” for Resnick, who defrauded and collapsed a local bank by stealing $10,000,000 in a check-kiting scam.

Enacting his Fifth Amendment rights under oath in the civil case, he was ordered to pay the $870k back to the federal government in restitution. The 48-year old Resnick was betting a million dollars a game in the early 2000s through sports books in Las Vegas brokered by Poeta.

Resnick actually wrote a book about his life as a gambler. Bust: How I Gambled and Lost a Fortune, Brought Down a Bank--and Lived to Pay for It came out in 2007. Resnick allegedly put 1.2 million on an NBA Finals game in 2002 (Nets vs. Lakers).