Without a speck of hyperbole, Google Street View is probably my favorite invention of all time that doesn’t prevent death or extreme discomfort. It perfectly combines my love for geography with my interest in world travel and my hatred for physically going places and doing things. So much so that after my virtual tour of Woonsocket with Donnie and Nick in May, I never closed up shot and honestly just kept exploring the local area behind the scenes. Minutes turned to hours, Woonsockets turned to Worcesters, 10PM turned to 60MG turned to 7AM, and next thing you know I was fully committed to virtually traveling across the entire continental United States. Click by Click. Common man stuff. 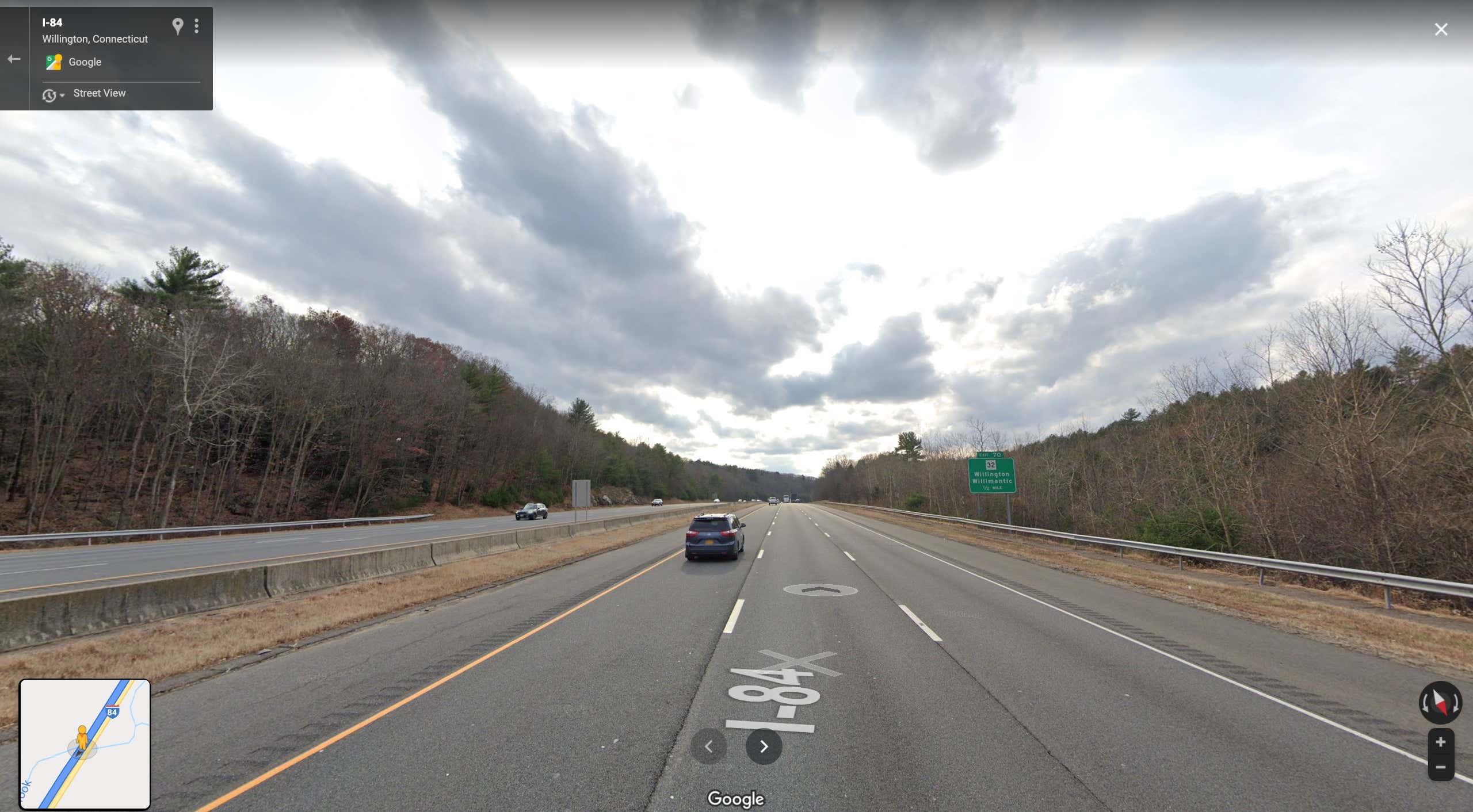 Fast forward six weeks to yesterday, and I'm heading past Dayton, Ohio on my stationary bike when I get a text from a friend about some kid from Brooklyn who's apparently doing the exact same thing as me. Except he's getting promoted and paraded by major media outlets for it...

Ok, fair enough. As bitter as I was/am, I respect him. I guess this just means that I have to skip the middle man and start documenting my journey using my own platform. So here we are.

This morning, as I was heading west on an apocalyptically flat and boring stretch of Interstate 70 – somewhere between Indianapolis and St. Louis – I felt myself dozing off and in dire need of a pit stop. I didn’t care if it was a volunteer fire department or single pump gas station, I just needed to look at something other than pavement and flora for a few minutes. 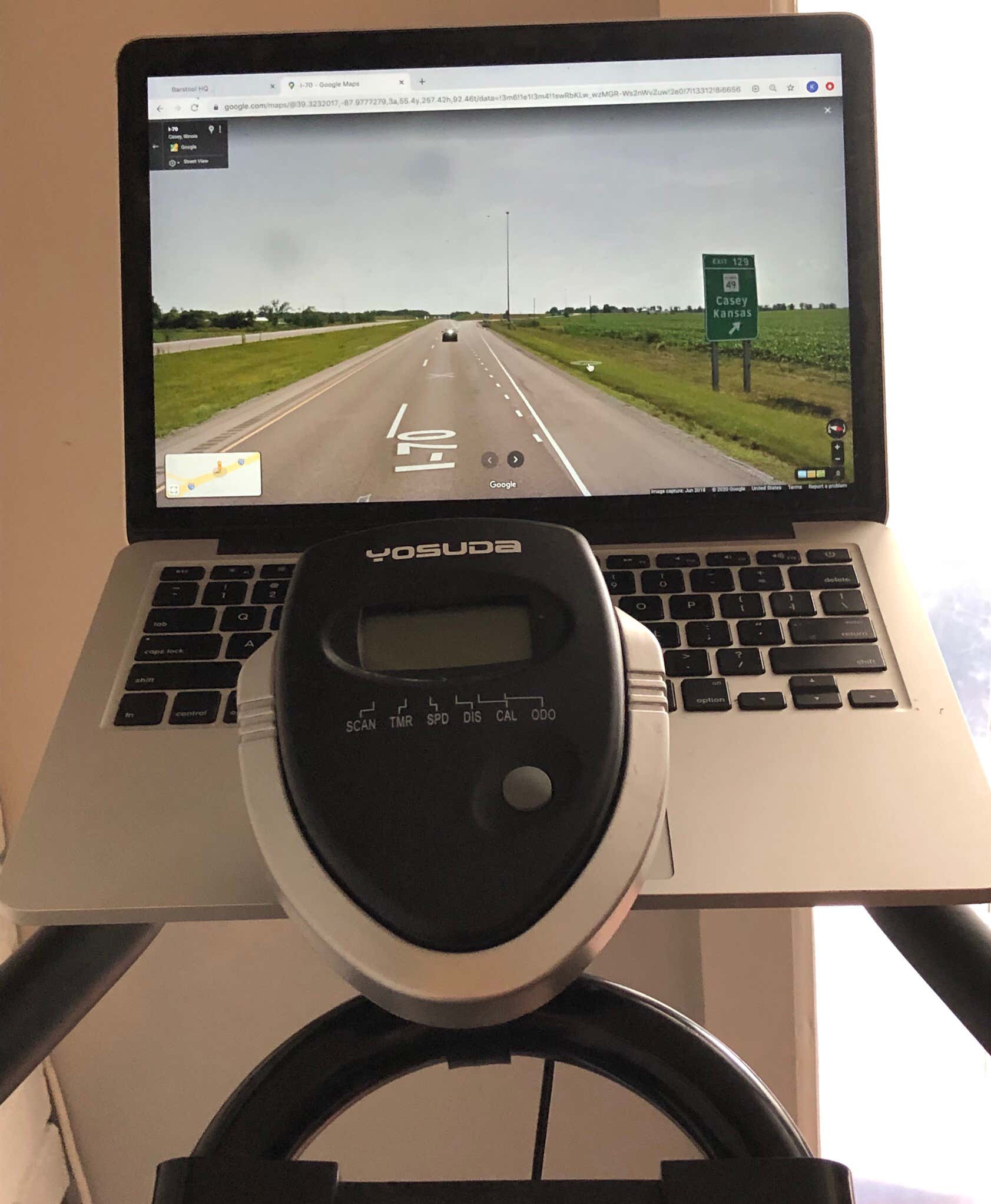 My 21st pit stop on a 3,000+ mile Google Street View trek across the country happened to be in a rural town by the name of Casey, Illinois.

My experiences with the state of Illinois are limited to being incessantly force fed fabricated factoids about Chicago by its many prideful residents on the internet, catching whiffs of the exotic odors that permeate from Mantis’ Lollapalooza bracelet, and personally playing a key role in a historic collegiate shutout. Other than that, the Land of Lincoln is kind of a mystery to me. I was poised to get a taste of its politically corrupt Midwestern charm. 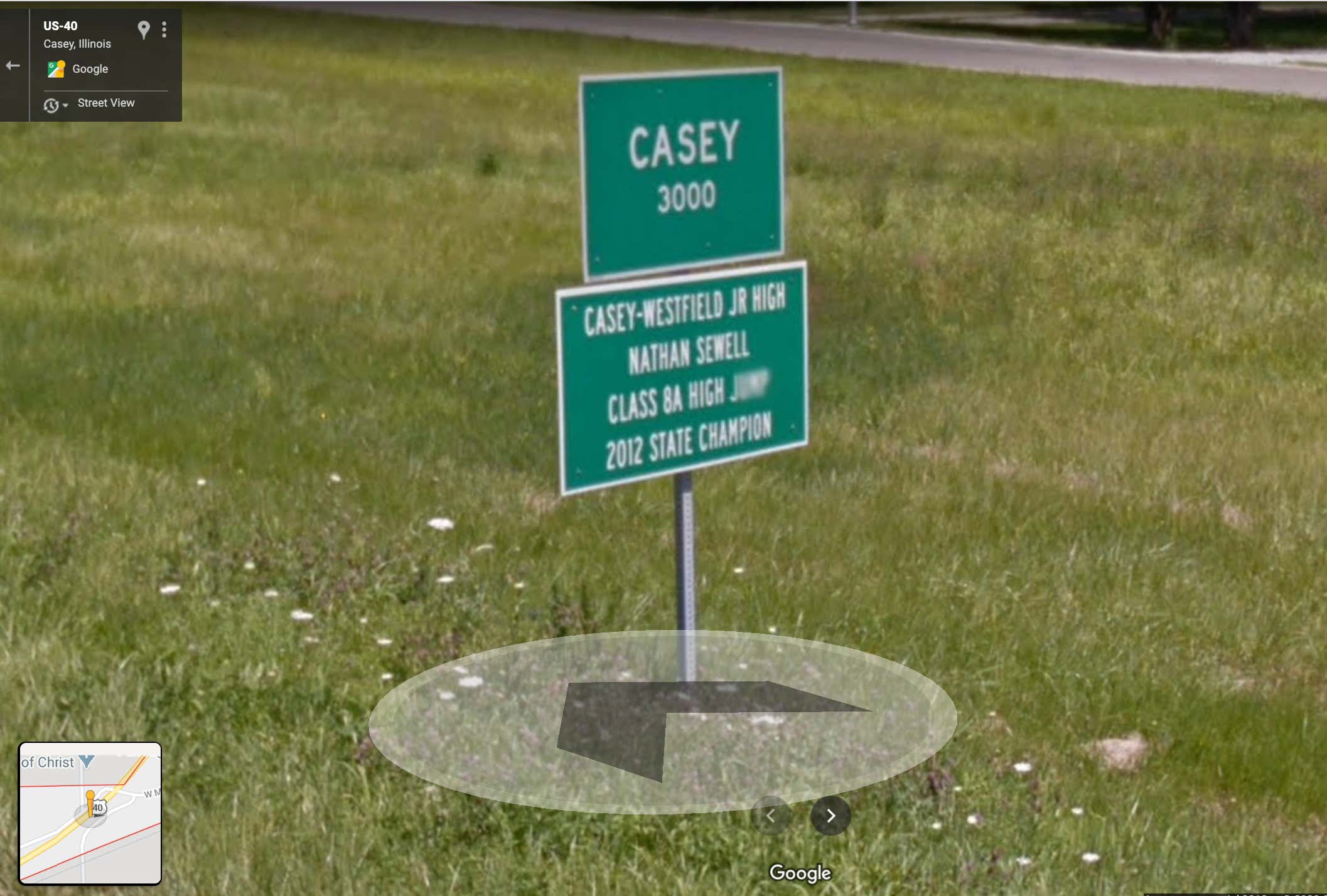 Not a very promising start when I saw the town’s sole pride and joy was a middle school high jumper. But I trudged on to the downtown area of the city, and somehow, someway, I was still unpleasantly surprised. 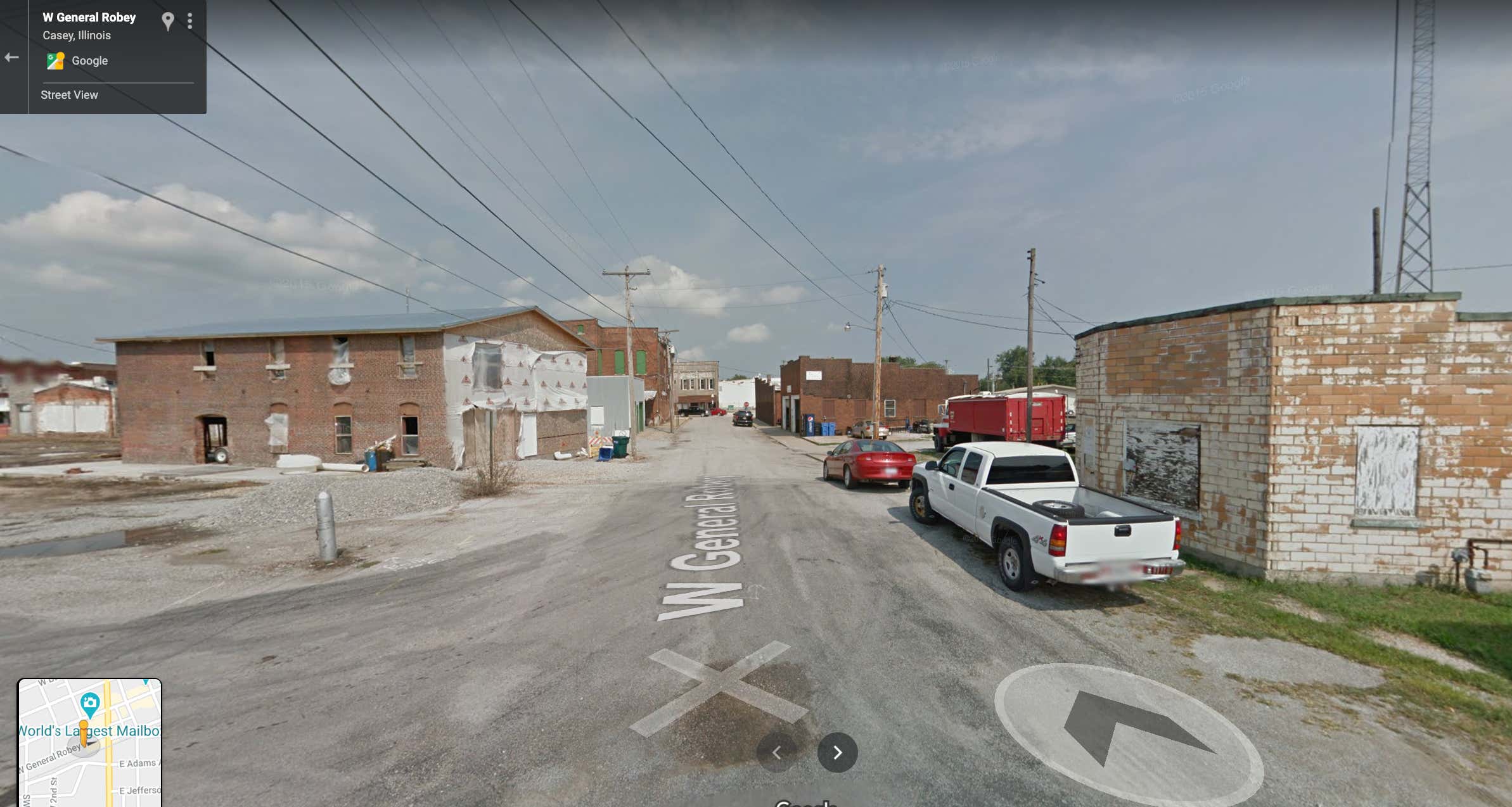 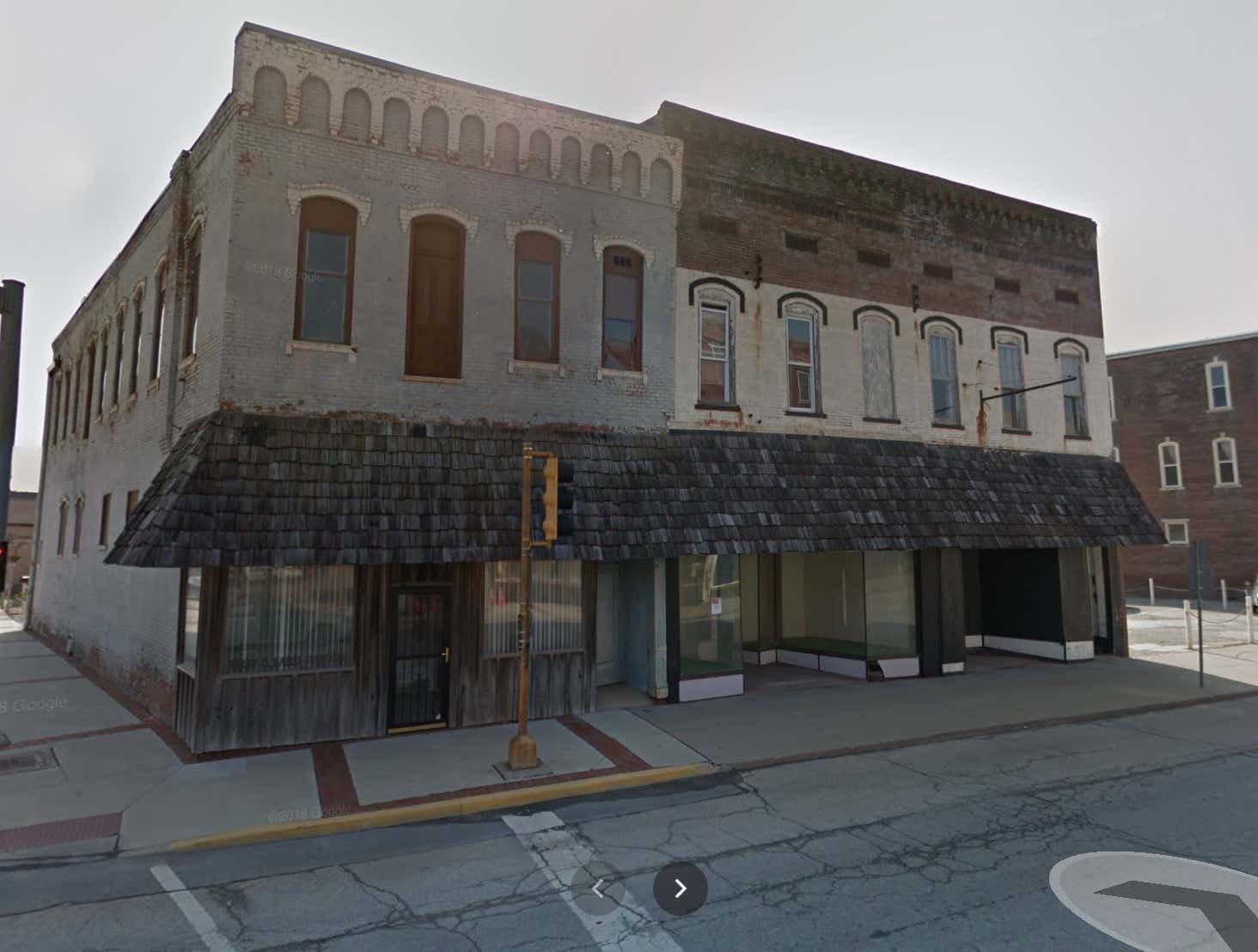 I didn't think the "heart of Casey" could look any worse than it did during the 2011 Orlando trials, but this bleak little shit hole proved me wrong. 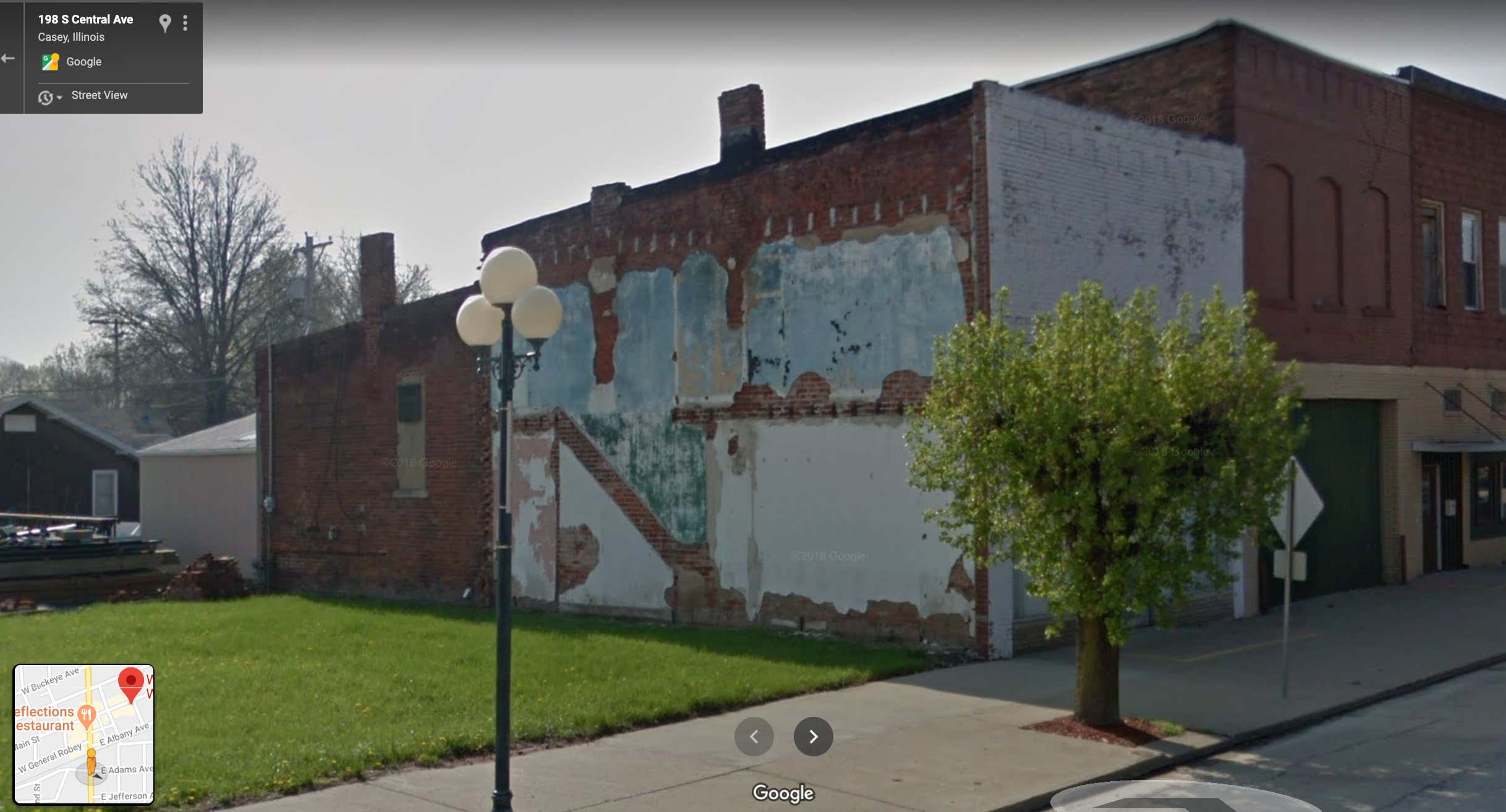 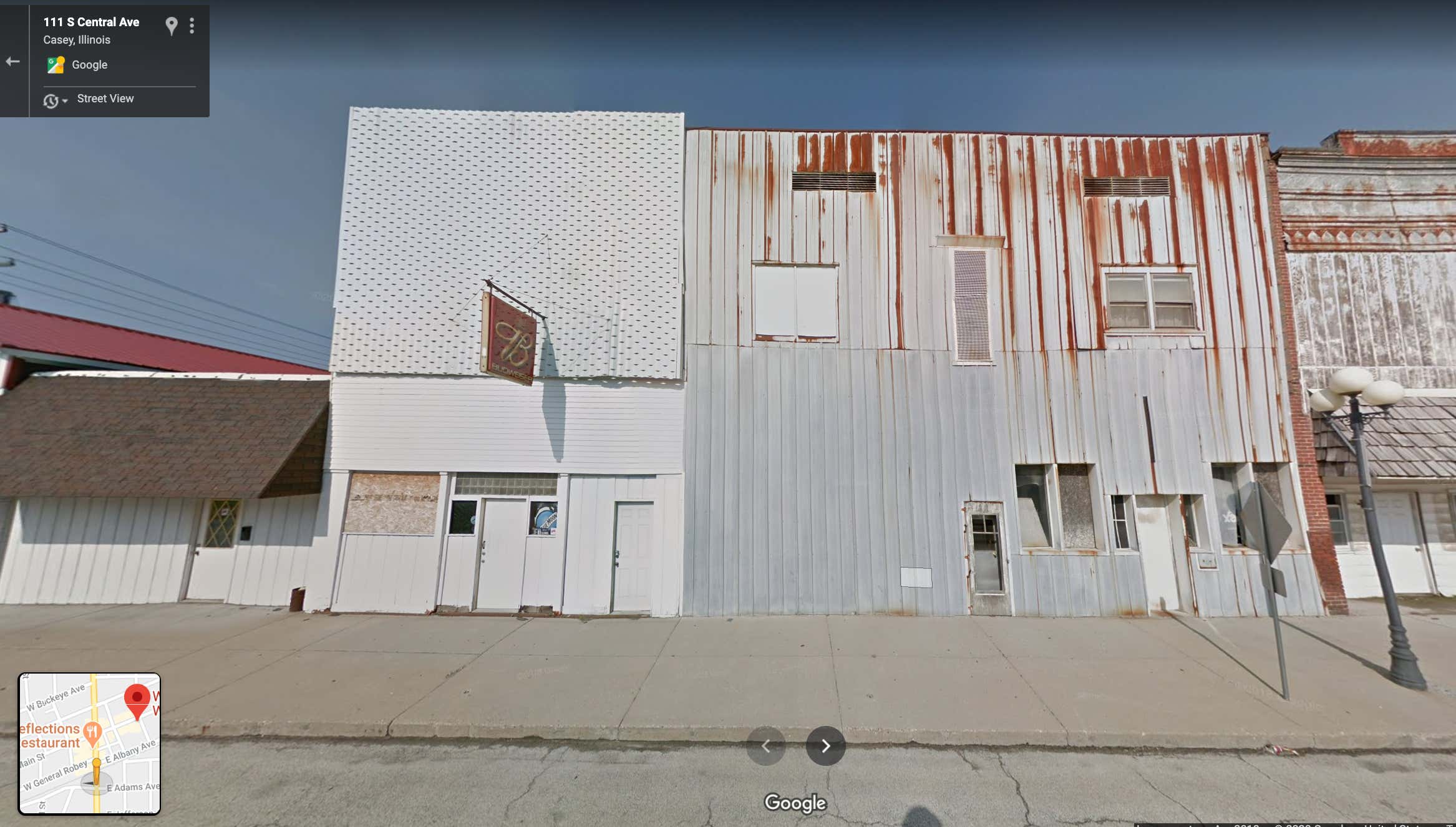 I didn't know it was possible for inanimate structures to get gangrene until I saw the buildings in Casey. It looked like you could take a quarter to their exterior and win a dollar.I've never seen architectural deterioration get so bad that it starts to resemble a Banksy piece. But my intuition told me to keep going, and thank God it did... 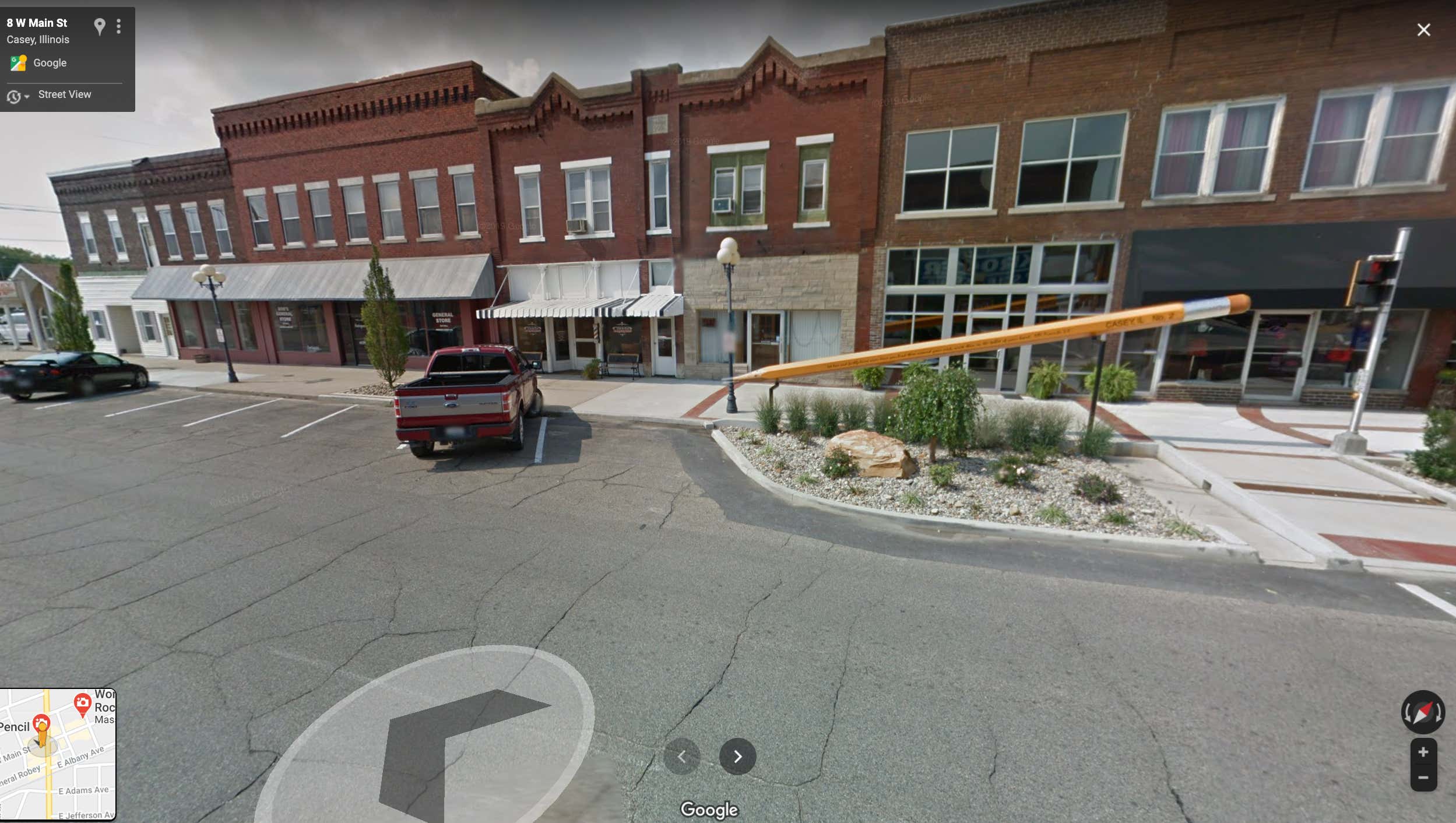 Nestled amongst picturesque pubic patches of juniper shrubbery in front of what appears to be the two-dimensional cardboard stage design of a high school play, you’ll find the largest No. 2 pencil in all of Illinois. A sight to behold, it’s not just any old “tourist trap” or roadside oddity. It's a magical place where local folk can escape from reality and pretend like they're giant superheroes who have the power to defeat standardized testing. 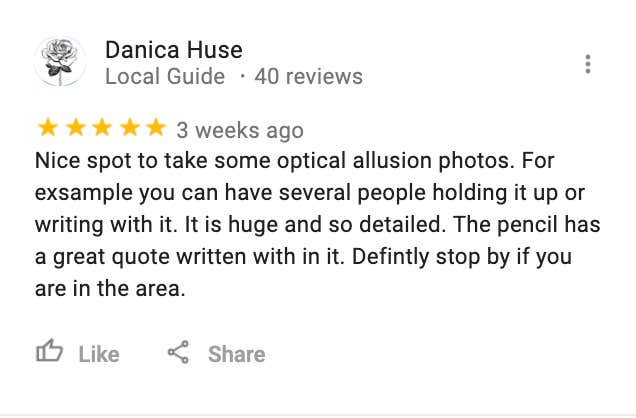 Can't help but agree that it would make for some gnarly photo ops. Granted, I don't know if it's possible to look cool while posing with an oversized penc- 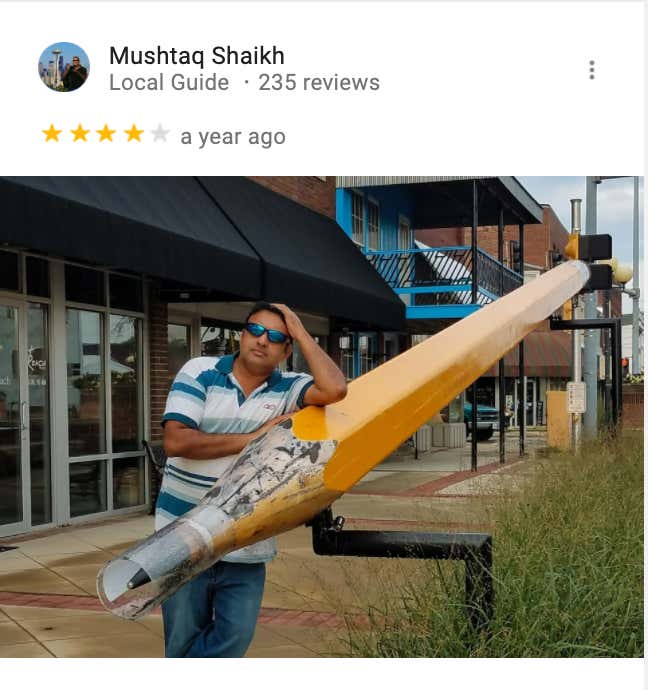 I'll be damned. Moving on down Main Street... 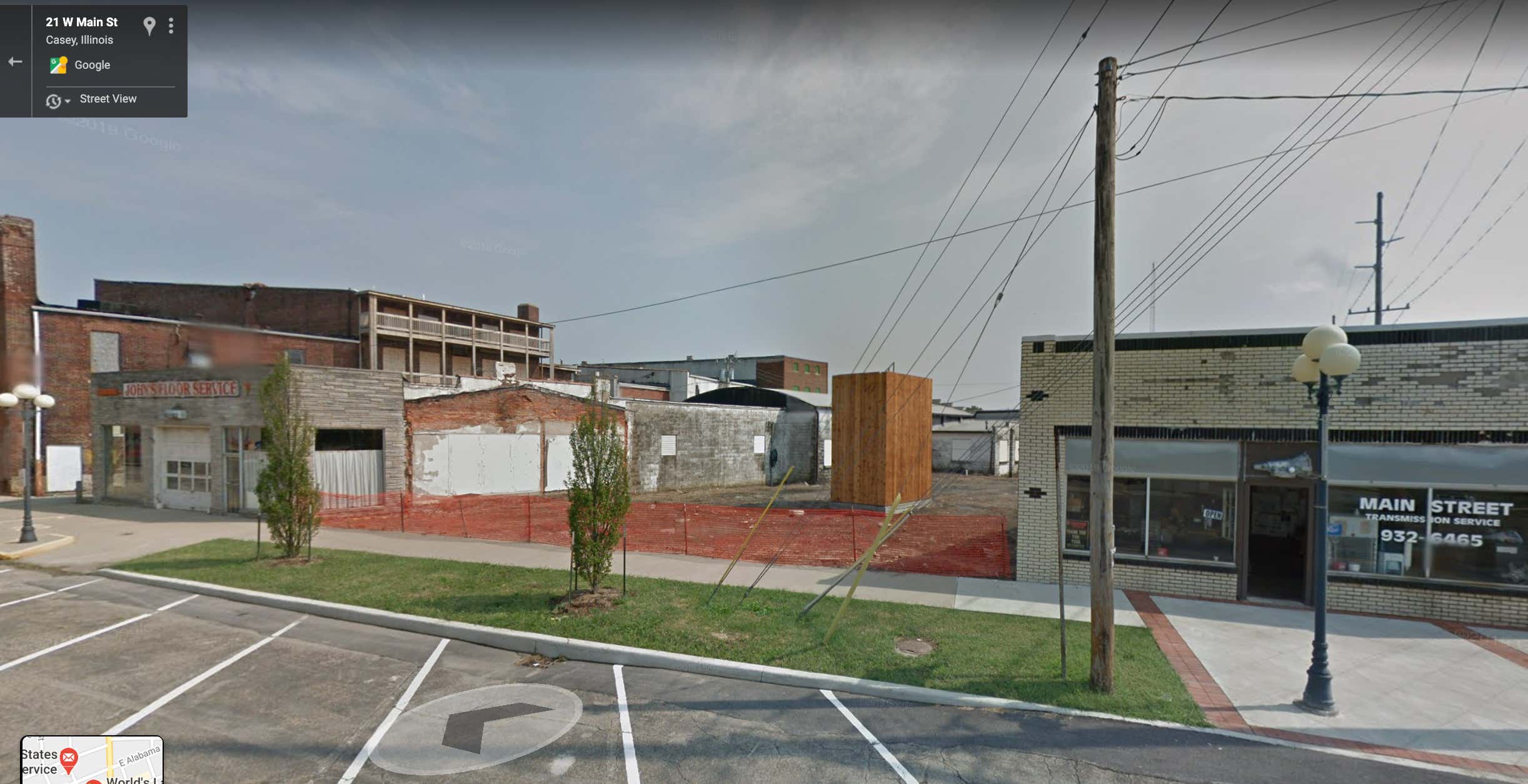 You see what's going on in that abandoned lot of rubble betwixt those decaying service shoppes? Looks like just a big, dumb wooden post, huh? 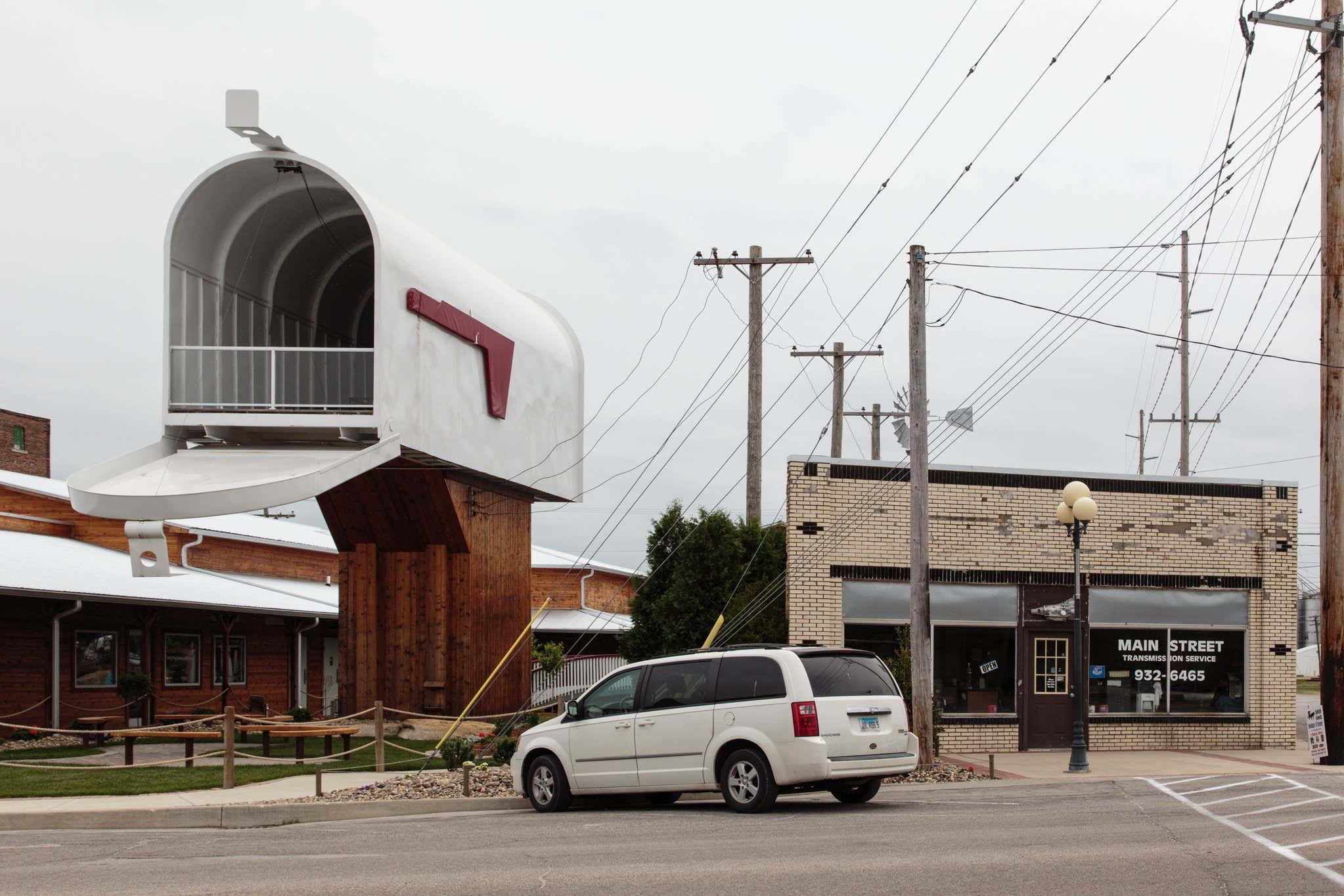 Wrong. It's the largest mailbox in the entire fucking world and I had the pleasure of not only virtually seeing it up close, but also penetrating it via Google's Photo Sphere feature. 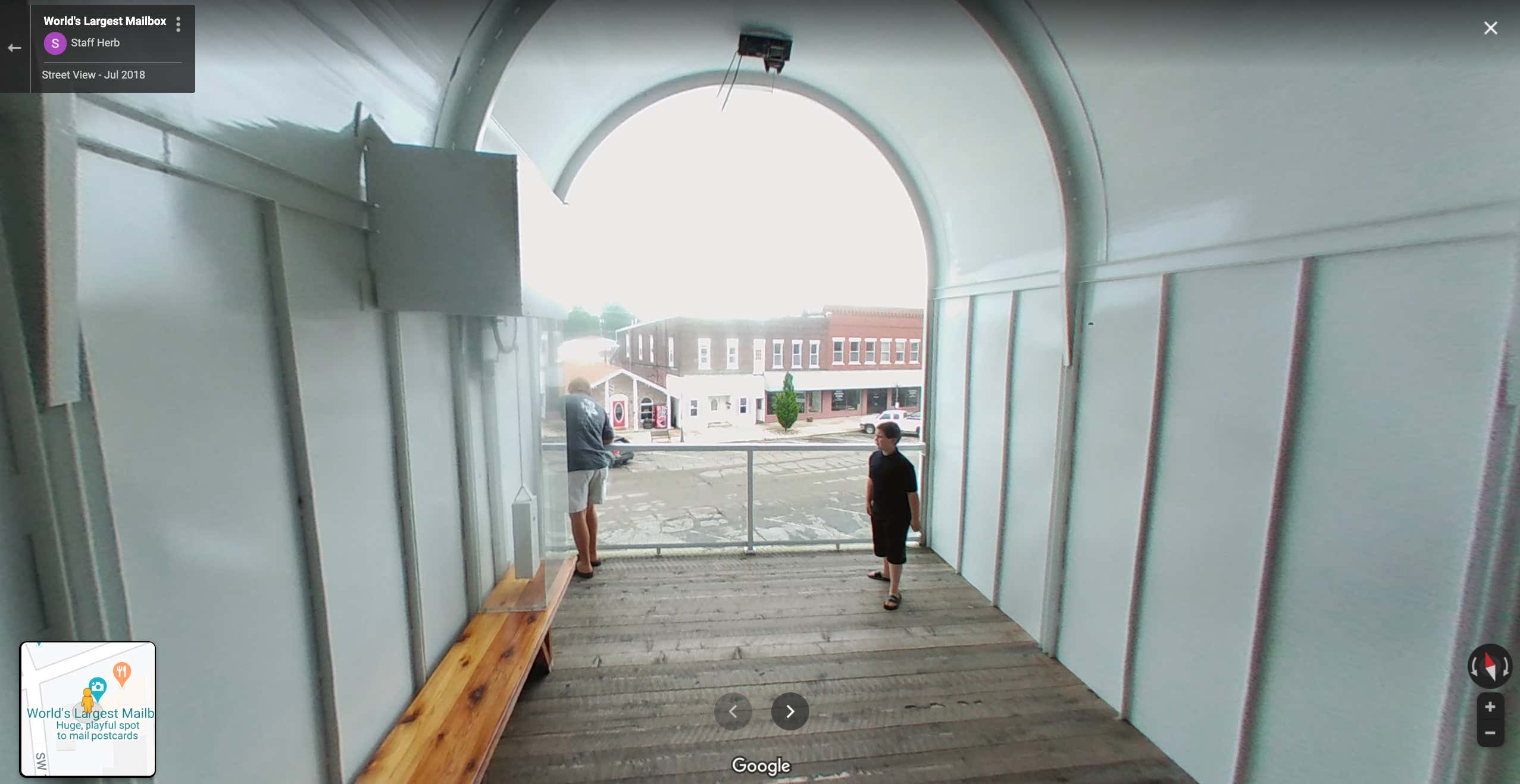 There's not many things more exhilarating than getting a first-hand POV of what it's like to be inside of a storage container, but there I was. And if you think that's a cool perspective of the World's Largest Mailbox, then imagine looking at it from the World's Largest Bird Cage. 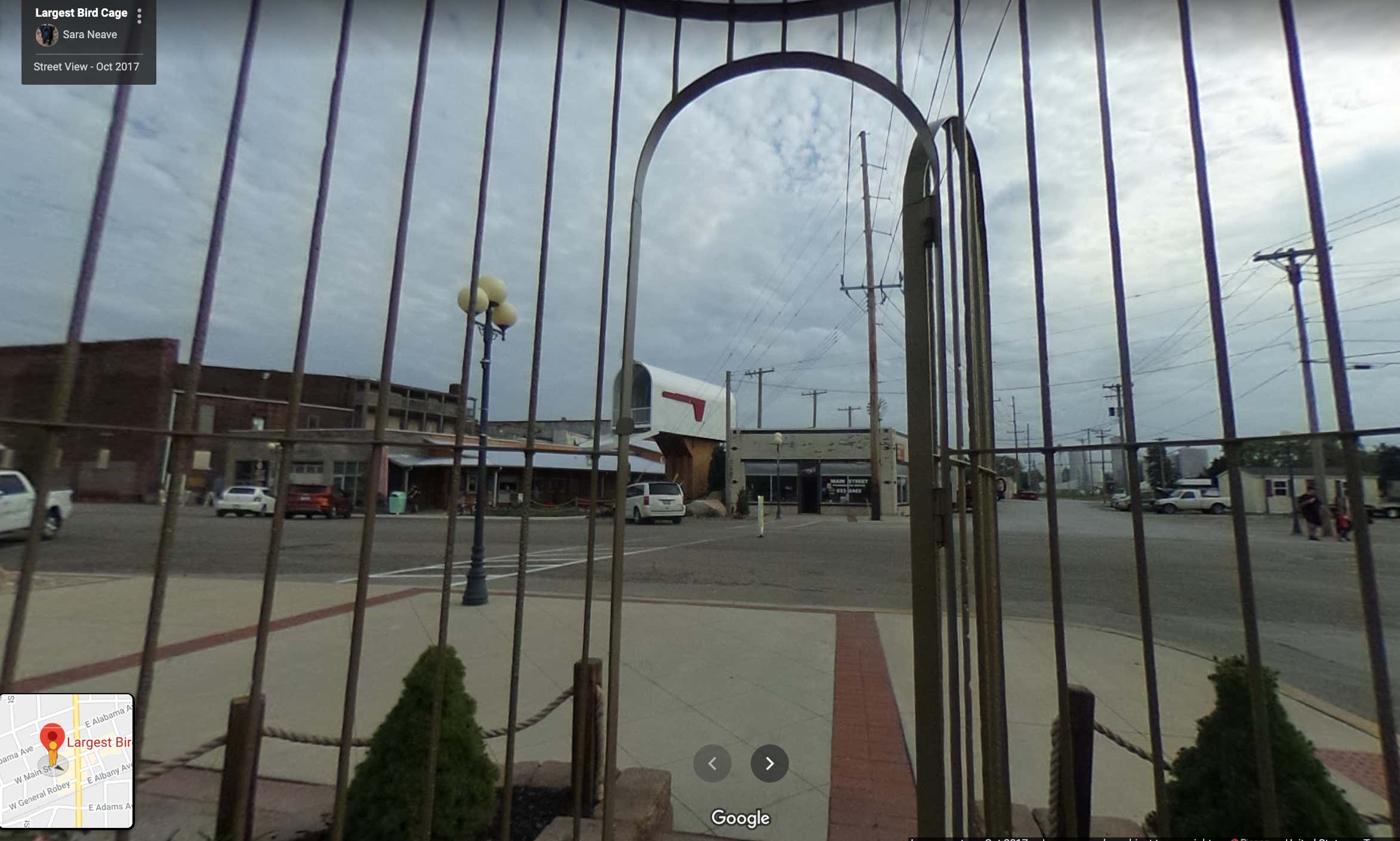 Now, think of the one item that's even more enticing than a pencil, mailbox, or bir- 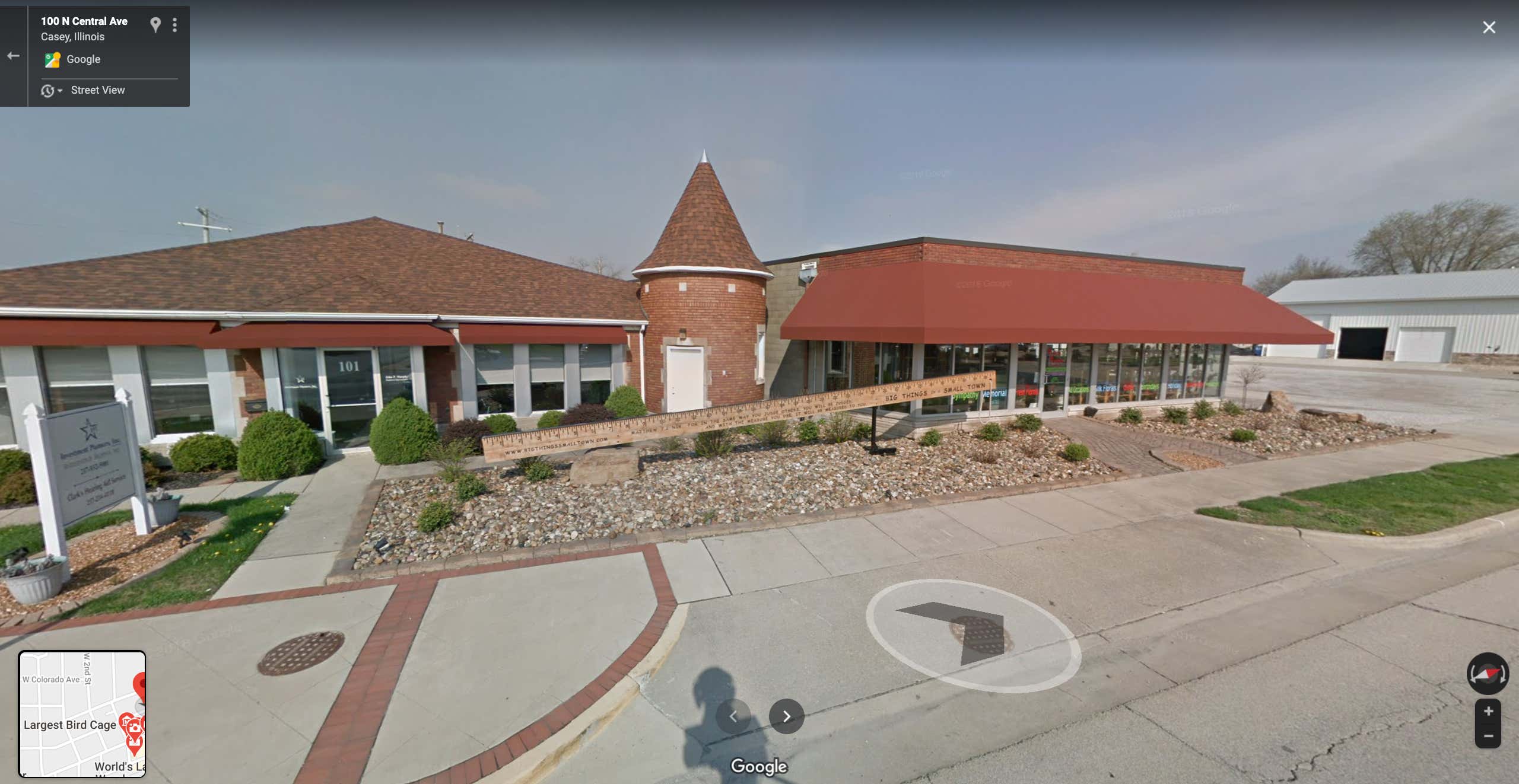 Yep, a yardstick. The world's largest yardstick, a title that completely redefines the meaning of measurements, perched right in front of a hearing aid clinic in a bed of pebbles for the residents of Casey to gawk at on a daily basis. 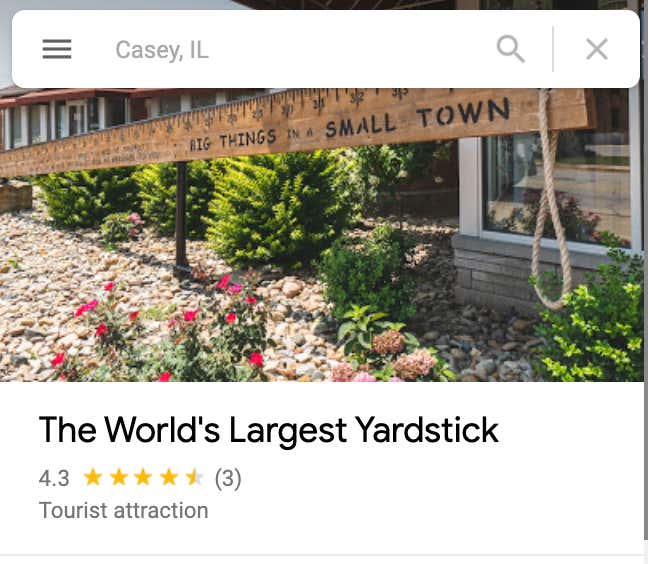 As the world’s tallest 5'7" man with the world’s largest 5 1/4 inch dick, I took a keen interest to this tourist attraction. In fact, I was in heaven. Hell, I could've made a day out of it, but I had to make haste. And as I continued to explore the town, a particular marketing trend caught my eye... 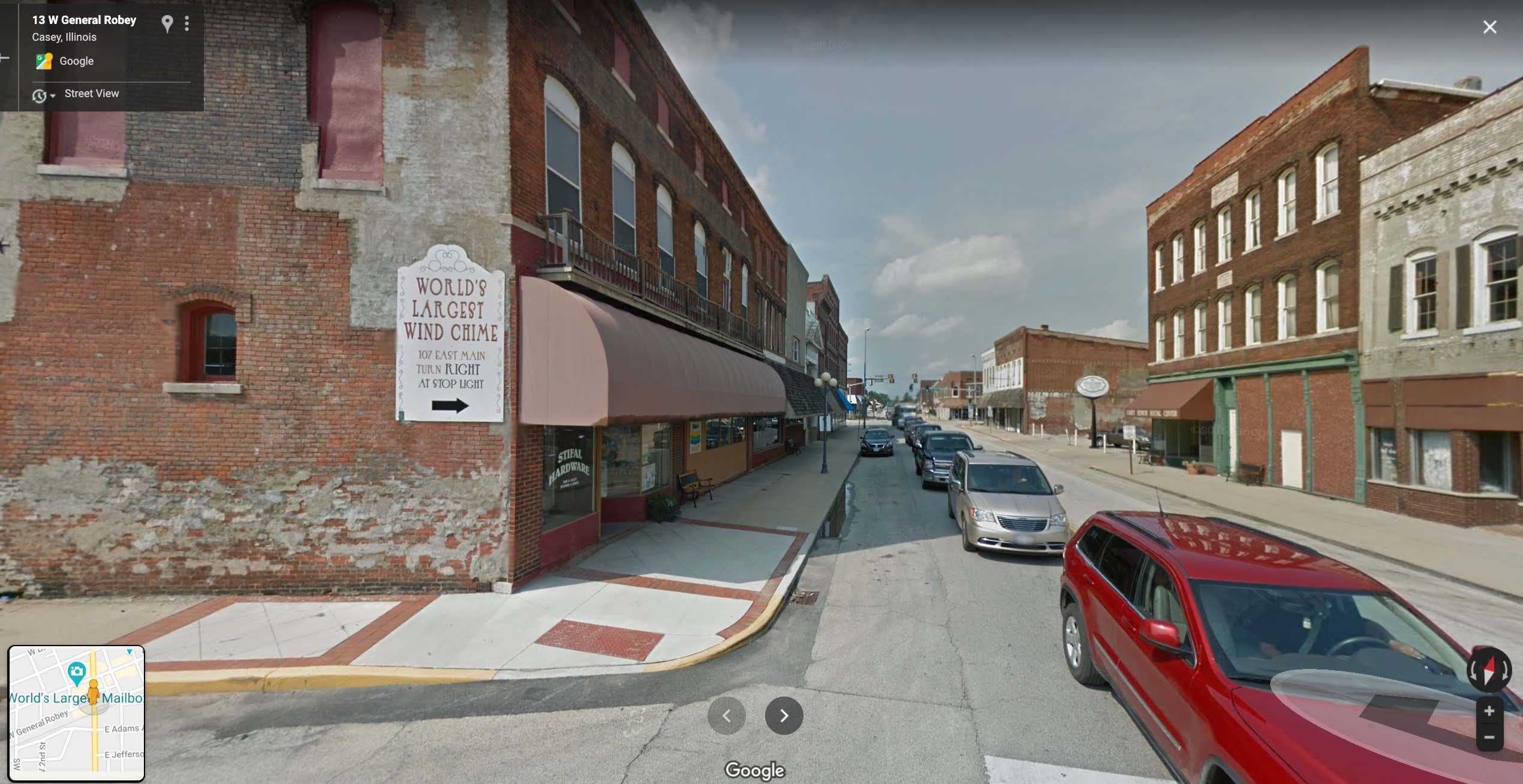 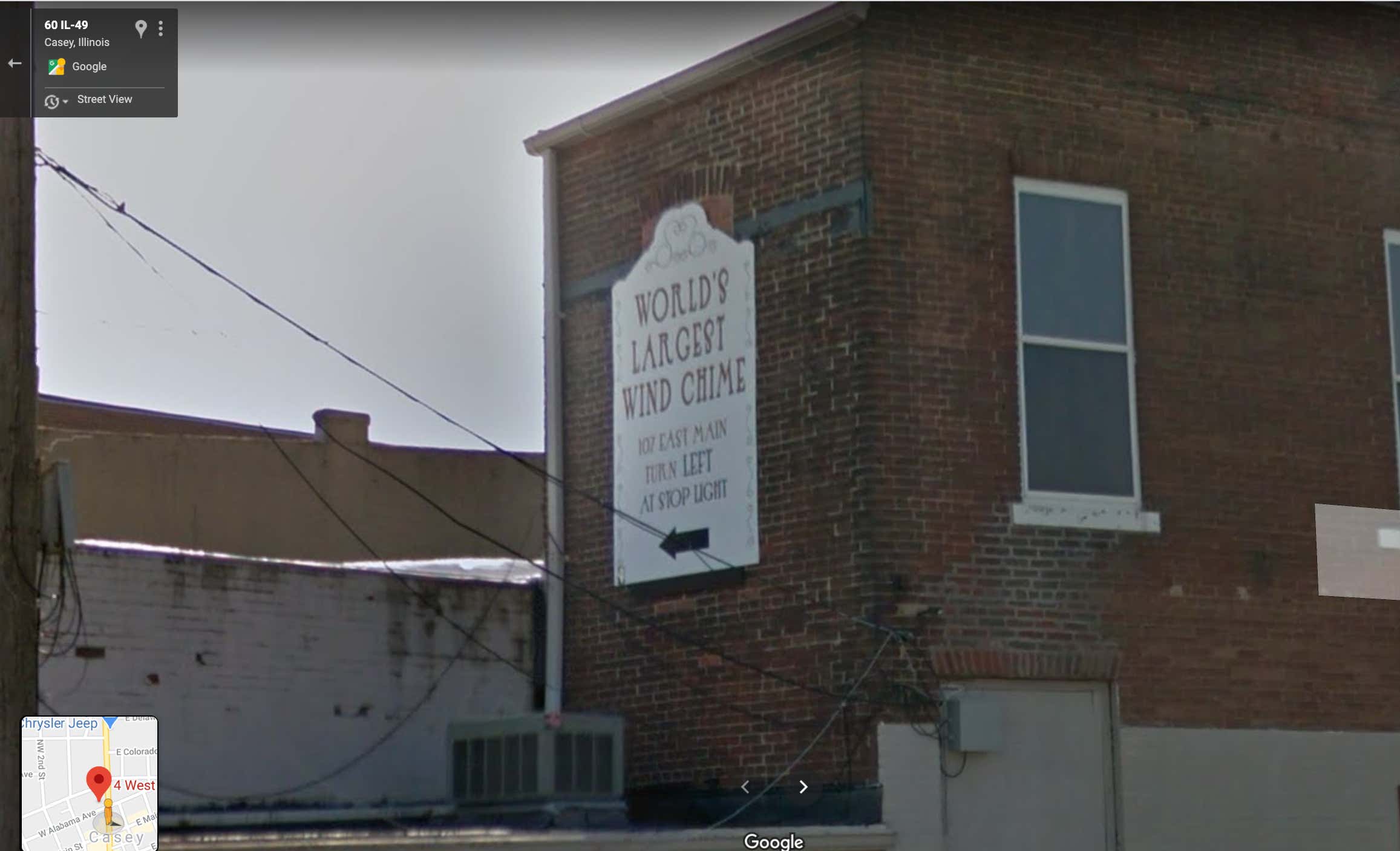 A certain advertisement for a certain enlarged porch instrument seemed to be repeated several times over. Fuck those other gimmicks...the city of Casey made it a point to point you in the direction of the World's Largest Wind Chime. I was enamored. 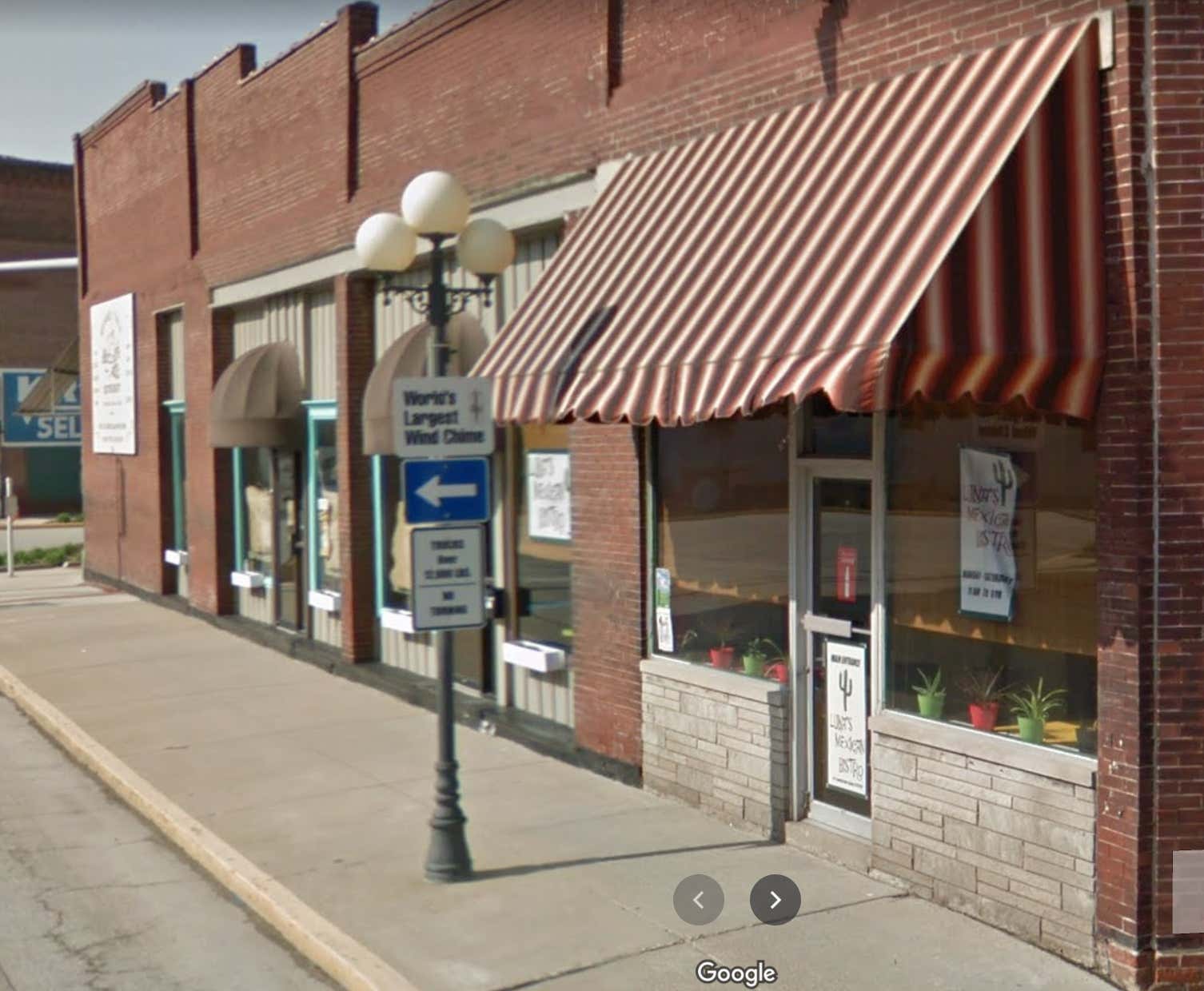 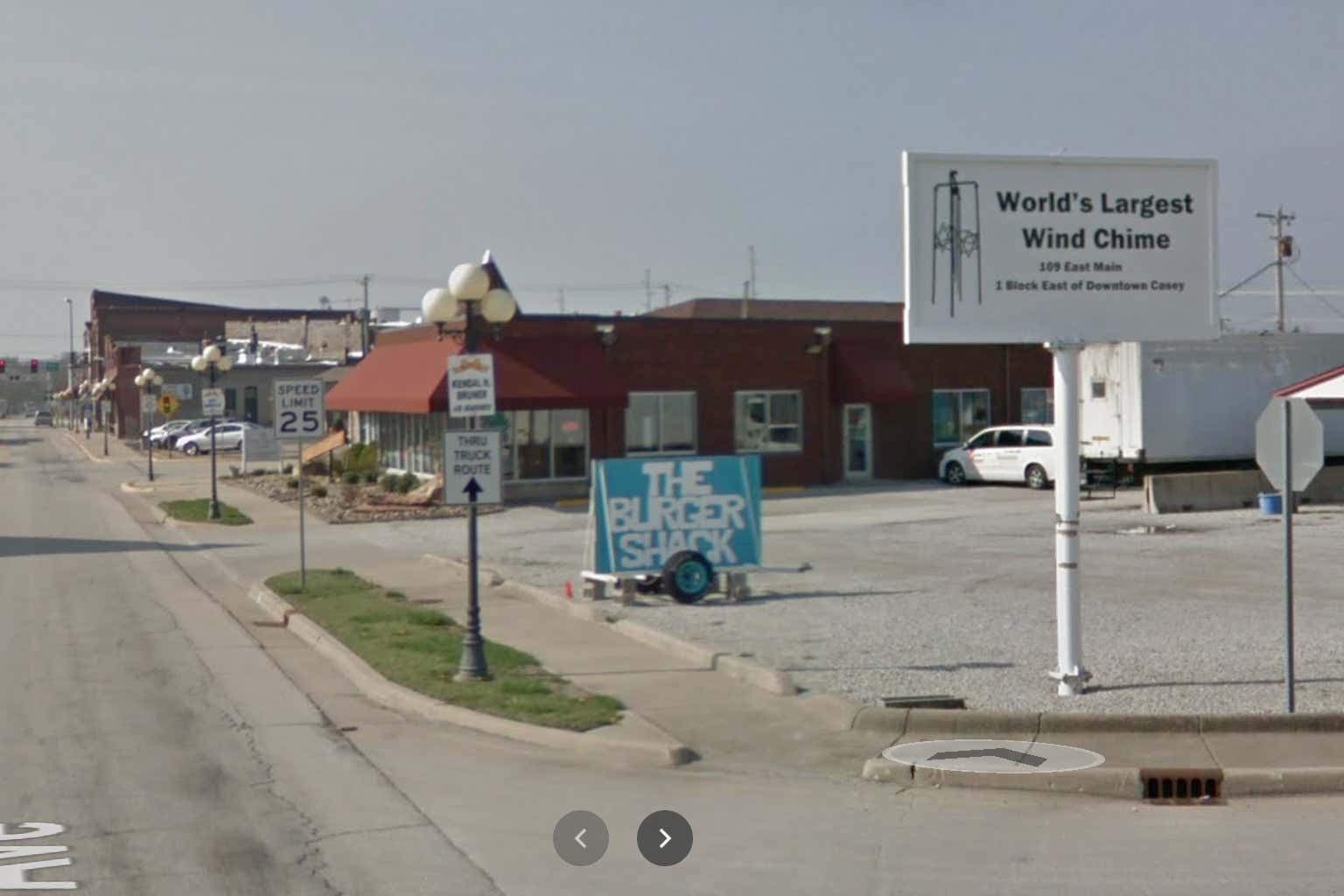 With a racing heart and sopping wet fingers, I clicked my way down East Main until I was face to face with the beast itself. A supersized spectacle of sound and steel. To say I wasn't disappointed would be the world's largest understatement. 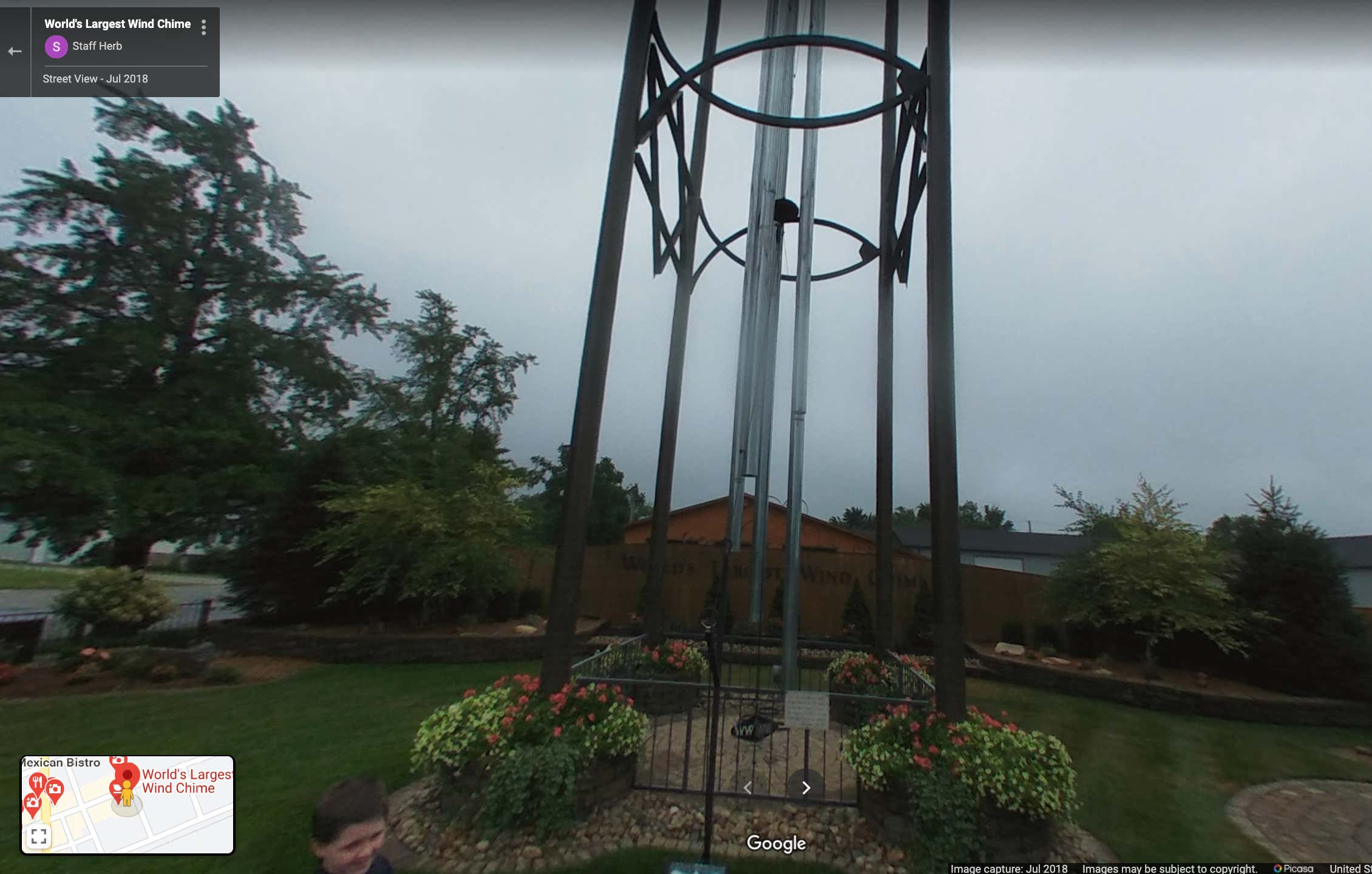 I couldn’t even imagine how big of a fun-sucking wet blanket you’d have to be to not enjoy such a universally beloved musical fixture like a 42 foot wind chime. 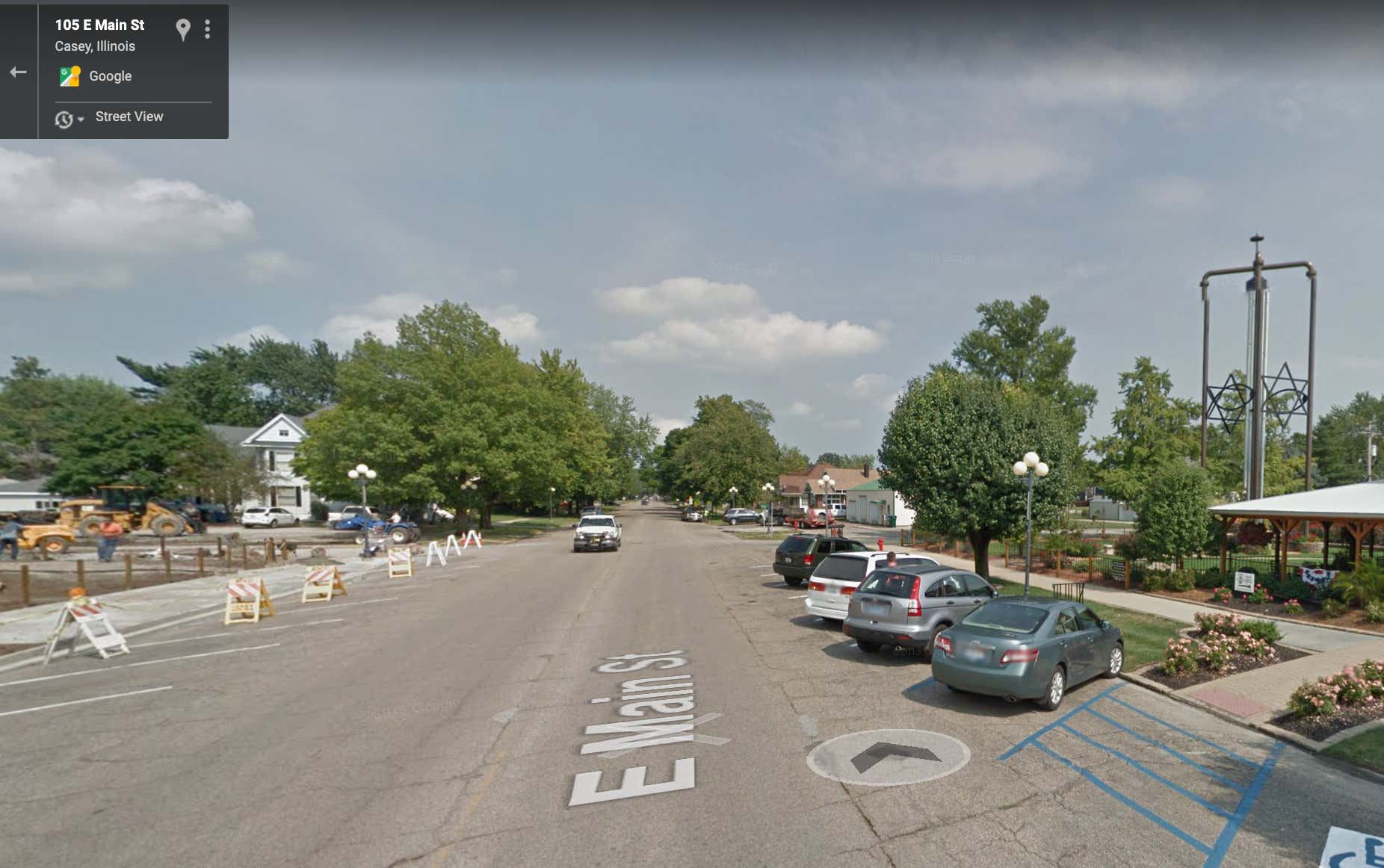 If there's one thing I can say about the corner of East Main and 2nd Street in Casey, Illinois, it's that the World's Largest Wind Chime absolutely dominates the general vicinity with its overwhelming presence. It completely steals the shows and overshadows everything around it, like the Eiffel Tower of rural Illinois. It's no wonder the town spent their entire ad budget on marketing it.

It would only be fitting for my pit stop in Casey to end on a high note like that. I have miles to make up, after all. Please enjoy some of the other photos I captured along the way. 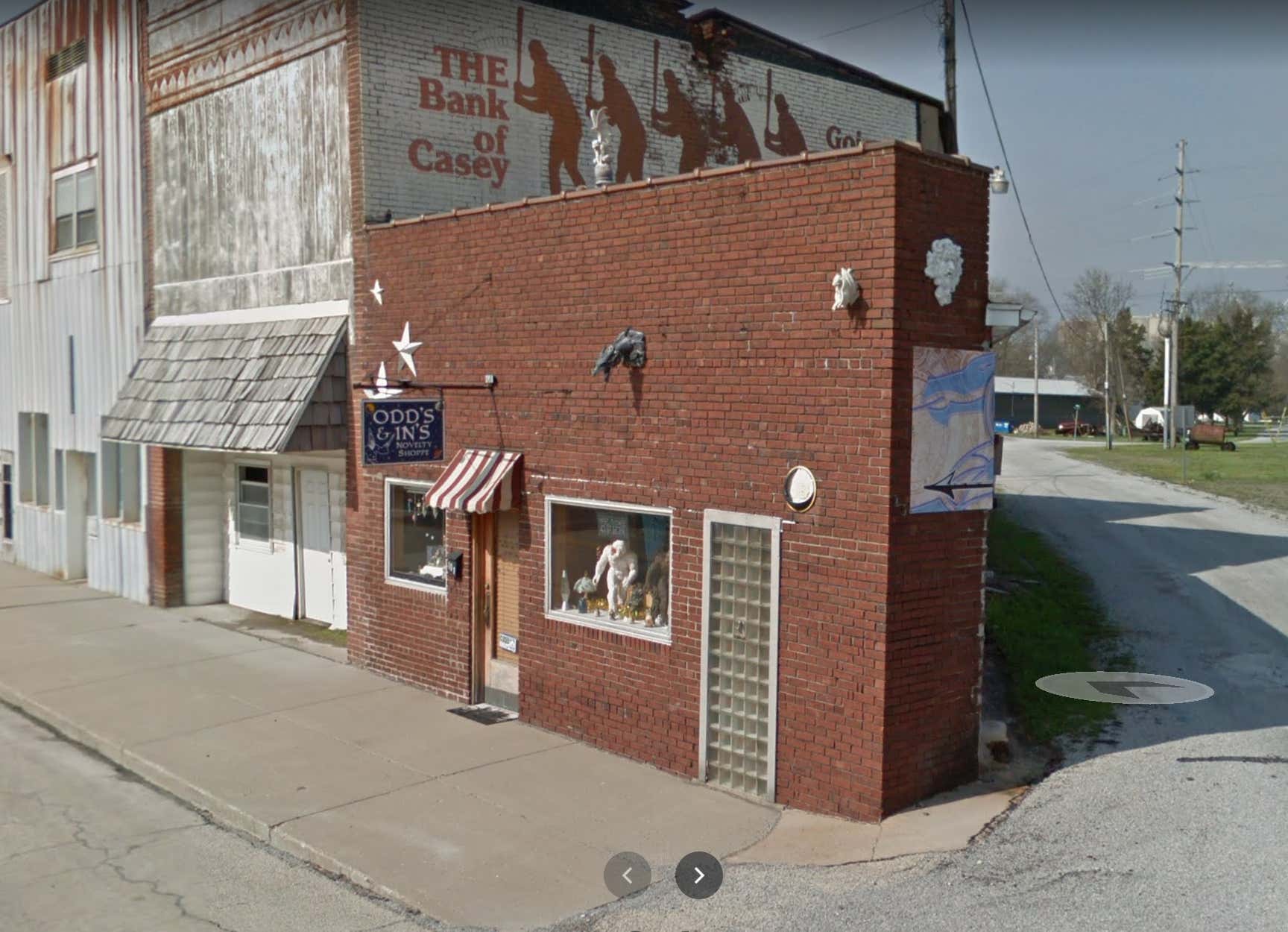 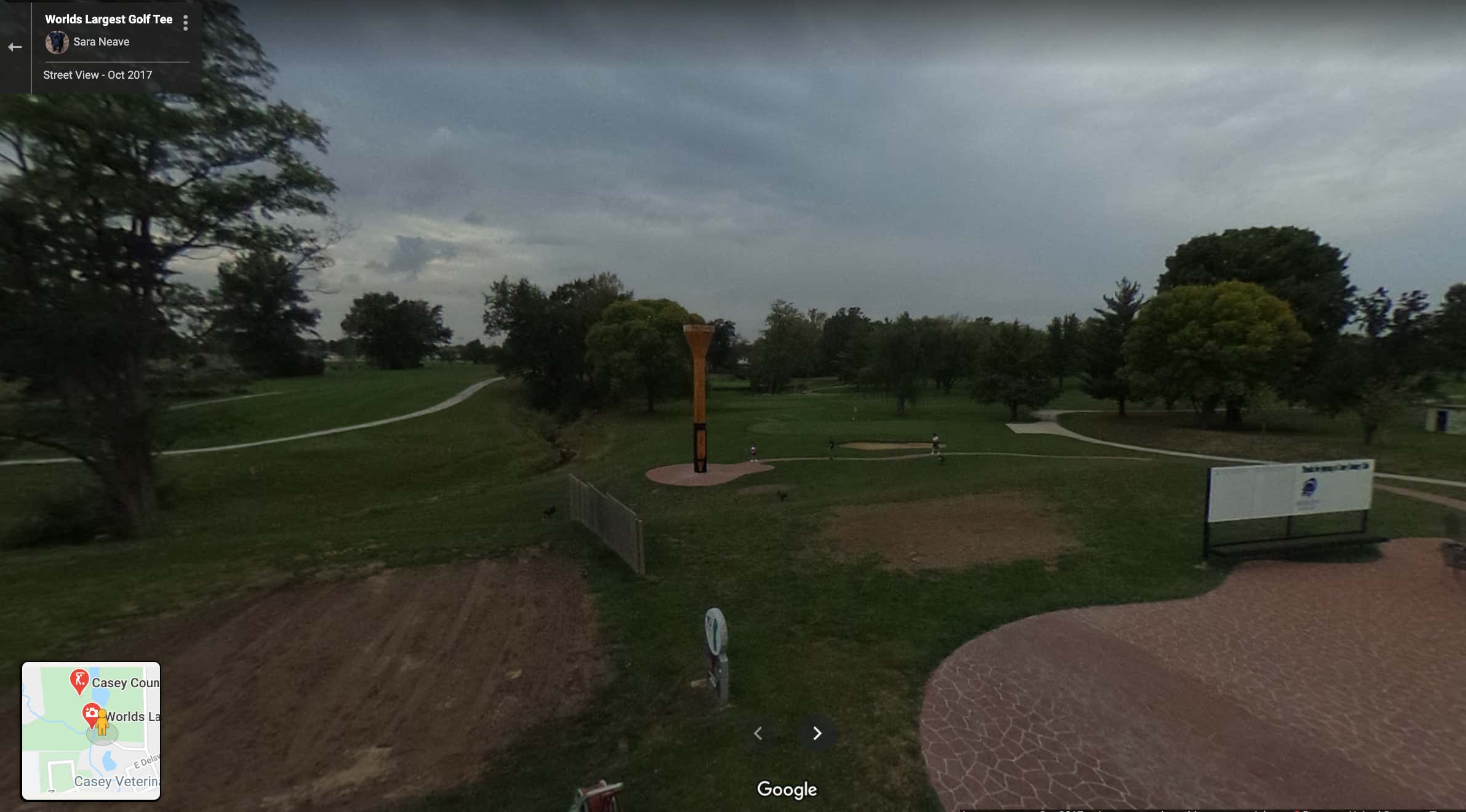 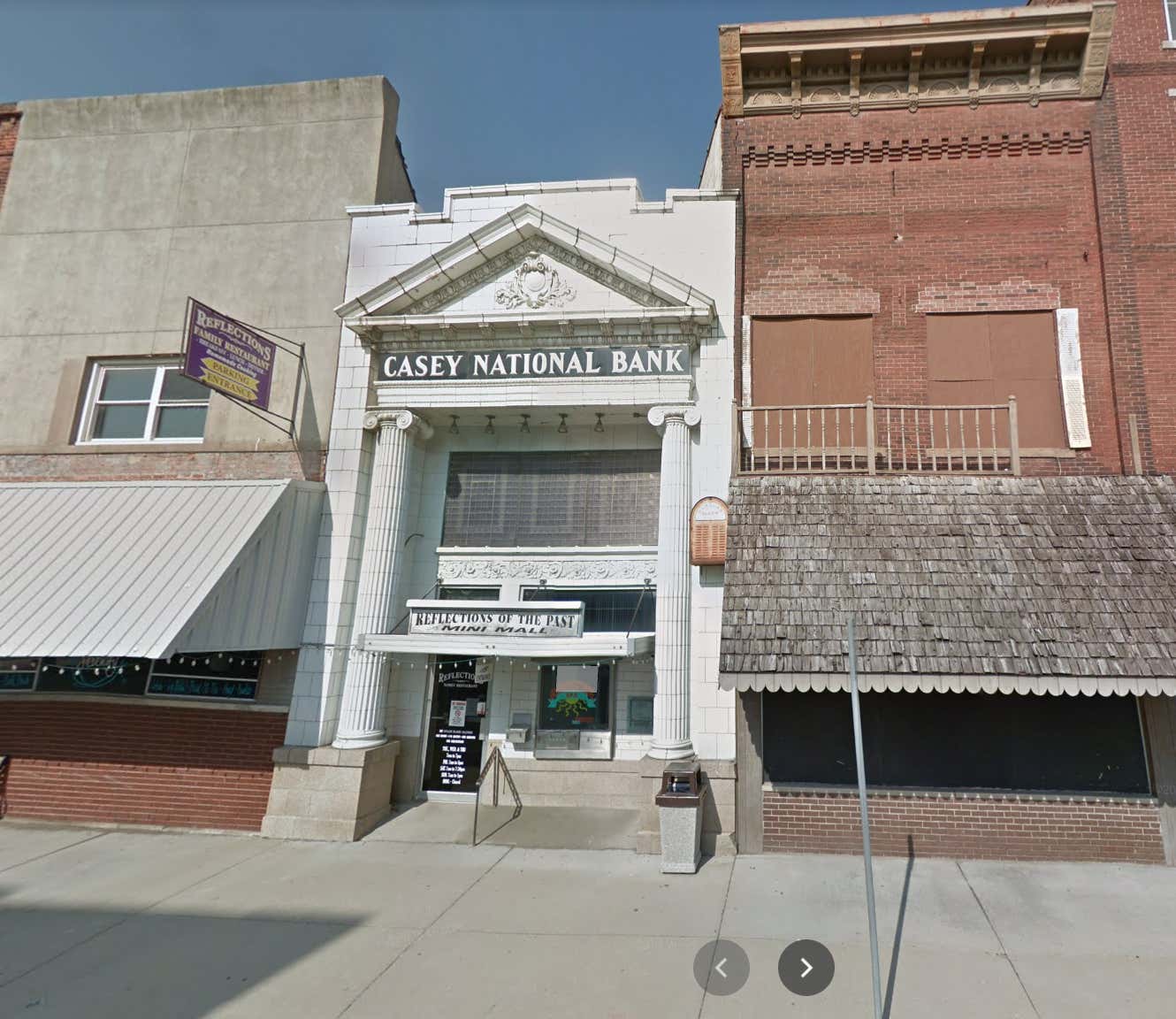 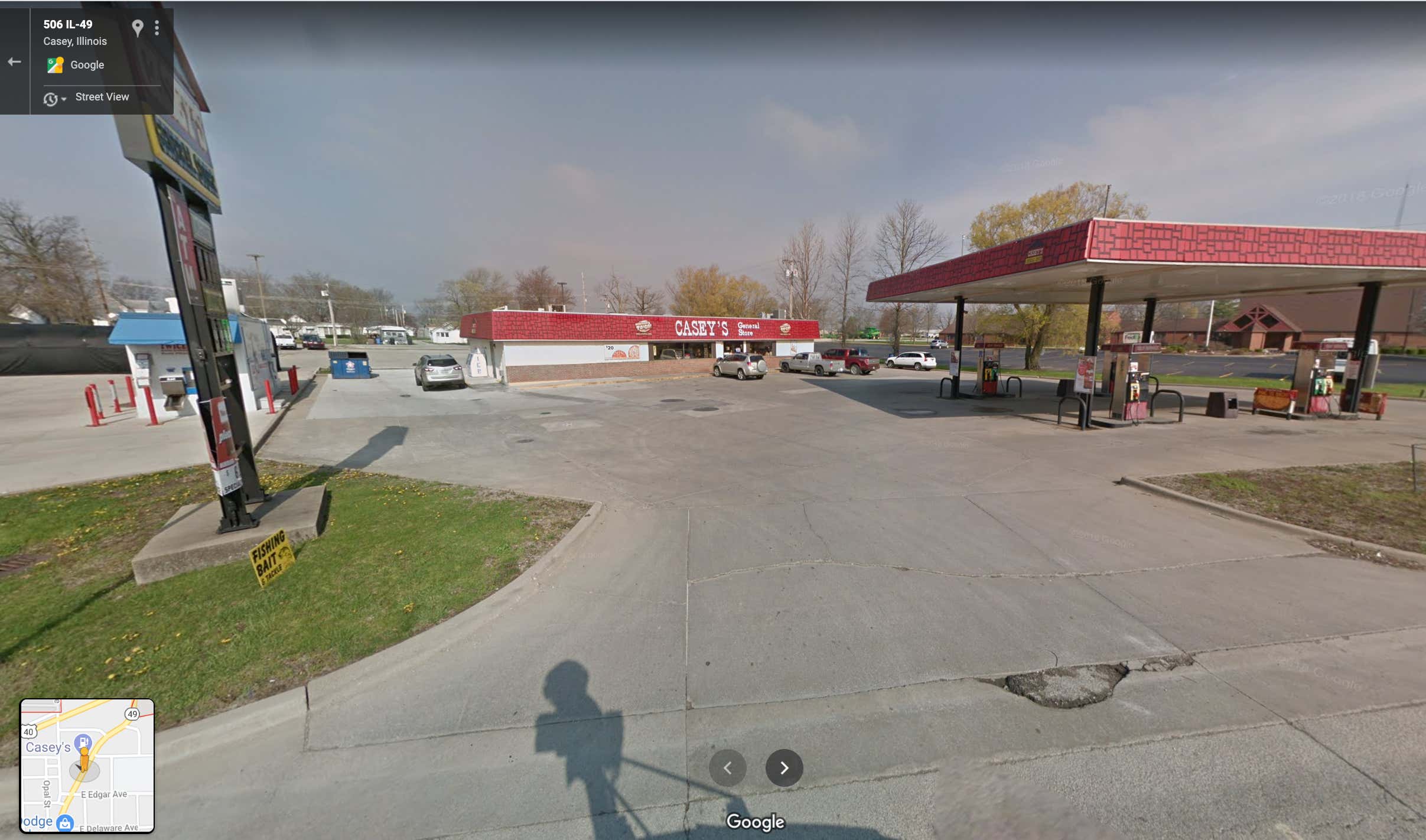 As much as I'd love to sink my gums into the gooey goodness of a gas station egg pizza, I had to get back on the interstate if I wanted to make it across the country before that Harvard lad. God bless. I'll check back in next week.