Successful relationships are built upon mutual interests. There's a give and take with it. In my personal relationship, I absorbed some of her interests (Love Island, showering, washing my sheets) and I successfully got her into playing video games. I have always wanted a "hot gamer girlfriend" and now that she likes to game, I'm halfway to my goal.

If you are in the same boat as me, and want to get your girl to join in the party, rather than nagging you about her birthday that was coming up a few days ago or to clean the Funyun dust off of your fingers before sex, feel free to use this helpful list.

If followed to a tee, you'll be running duos in Warzone in no time with your significant other. 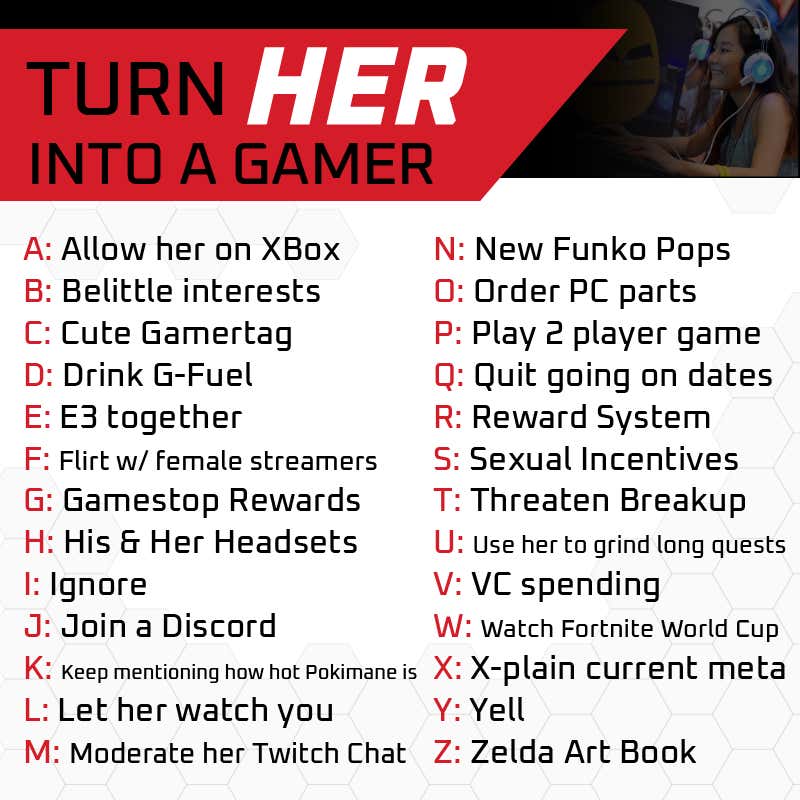 A: Allow Her On XBox

Perhaps the most simple one. She doesn't even need to "game" per-say. Just get familiar with the menus and the feel of the controller in her dainty non-joystick callused hands.

B: Belittle Her Other Interests

"Oh watching another episode of Grey's, huh? That's productive." "Really, grad school? MBA's are the new Bachelor's degree you know. It's cute that you're trying though." "Aww, going to another all night hot yoga class at your unlicensed instructor, Riccardo's, that I cannot find any information online for?"

To get my girlfriend, Amanda, into gaming we created a joint gamertag, and followed the lead of celebrity couples (Brangelina, Tomkat, J-Rod) by going with Amandick.

From elite gamers like Ninja, to insufferable fucking dorks like Ninja, G-Fuel provides the energy needed for an all night game sesh with your lady, all while tasting very bad. 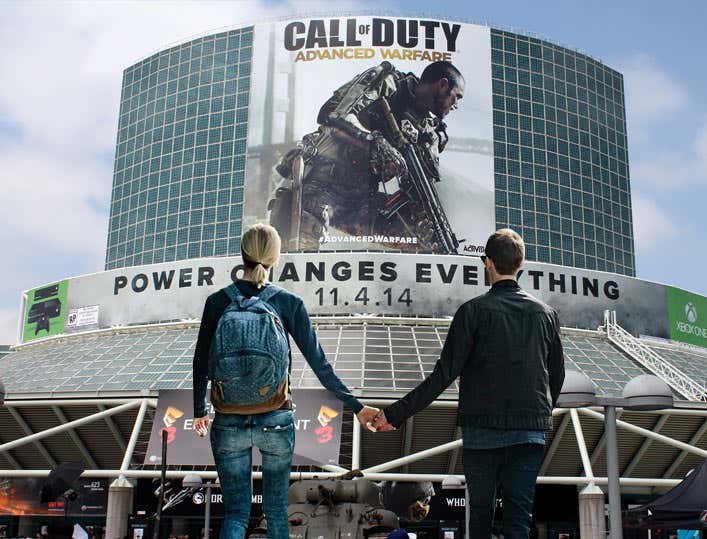 Maldives? No. Crete? Fuck yourself. Vacation planning will be a thing of the past when every year you just plan on going to Los Angeles. Memories will be made while kissing in front if the to-scale statue of Orgrim Doomhammer, and while anxiously awaiting the announcement of Super Monkey Ball on Switch.

Be sure to turn up your speaker when your favorite female streamer apathetically thanks you for the $10, while your "actual" girlfriend is busy doing another hobby like online shopping or paying the bills.

As mysterious as women may be, the one constant is that they love shopping. Imagine her delight when you gift her you're $15 dollar in store credit (after you spent $800 on Dark Souls 3 Prestige Edition), so she can get that tissue paper thin official licensed Luigi hat she's had her eye on.

H: His & Her Headsets 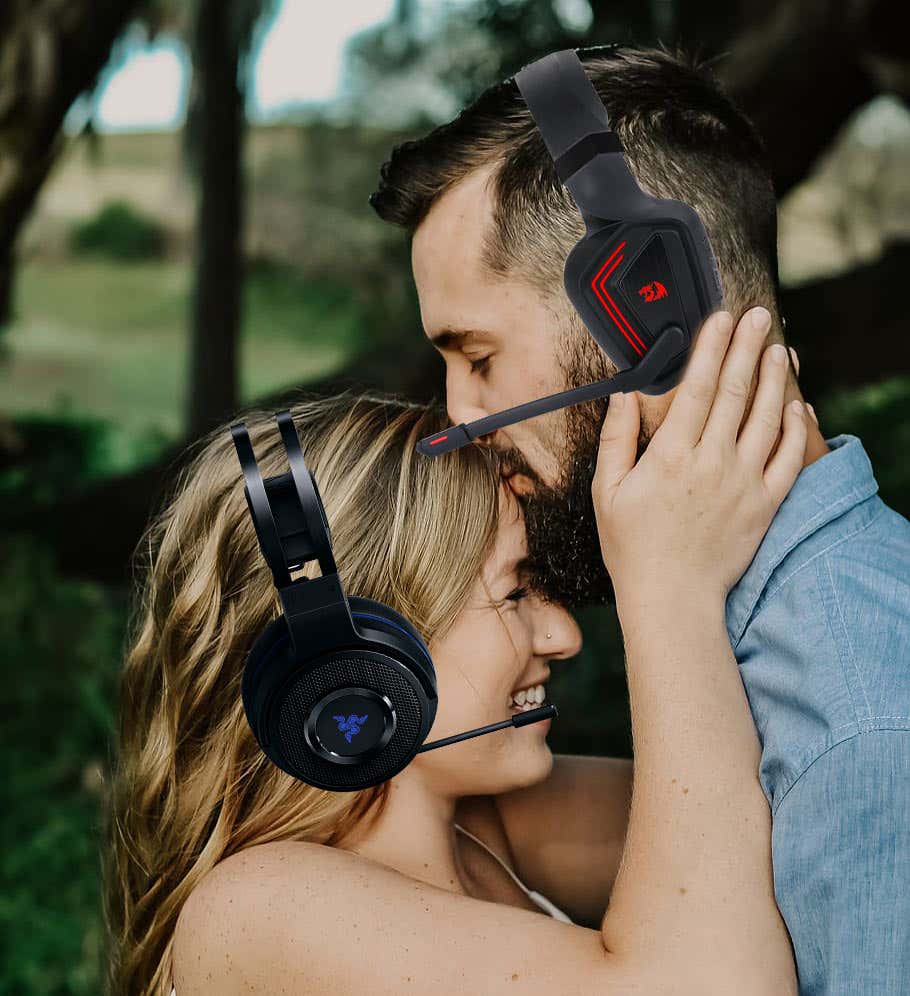 Yeah babe, I know you want a "cute" one, but there's nothing cuter than the THX Spatial Audio and lagless preformance of the Razer Nari Ultimates.

Refuse to answer questions. Don't listen about her day. If she wants to flap her gums, she can damn well do it in party chat.

Let her join and talk to other girl's that really want to get into an otherwise male dominated gaming world.

Next time you're at Kohl's together, mention in passing that "Pokimane has that same top, and her two breasts look phenomenal in it."

L: Let her watch you

Much like a toddler watching and imitating a parent, let her spongelike brain watch you sitting hunched over in a near-beanless bag chair and throw a $180 controller through her dog, Sadie's, urn.

To encourage her gaming, make sure to keep an eye on her Twitch chat. Get rid of any comments saying that she "sucks at League of Legends" or that her breasts "aren't even that big".

Christmas morning. She wakes up early and runs downstairs to see 30+ like sized cube boxes. Her excitement is palpable. She tears into the first of many, "Oh…oh wow, a Laura Croft Funko…from that one game, right? You have a that poster of her in our room." She takes her unmanicured nails and prepares to open the box. You scream. Does she have no idea of the potential value? You take it out of her hands, and place it on the mantle next to your own exact version of the Laura Croft Funko Pop.

PC parts may not be the most exciting to the uninformed, but you can still create the feeling of excitement of her coming home to a porch full of packages.

Think of the money saved if you stopped bringing your belle to Buca di Beppo bi-weekly. The trick is, don't even say "No more dates", just stop asking.

Much like a video game reward system, reward your girlfriend for in-game milestone achievements. Reach level 15 in Skyrim? You get 15 minutes with the AUX cord next road trip. Get play of the game in Overwatch? I'll call your mom and wish her a happy birthday.

I personally would never go down on a girl, but I would reconsider if her Warzone KD was positive.

Easy to achieve. Fill them with fear. She knows deep down that without you, there is no success in her future.

U: Use her to grind long quests

Let her take the sticks during those long, boring, delivery quests across Azeroth. She will get a feel fo the game in a low risk environment, and you can use the time to get her off your case by brushing your teeth or sending out a couple job applications.

Give her the rush of shopping, but without any of the tangible items.

Never browse Netflix again. Pop on some of the FWC highlights and discuss placement, build strat, and inventory balance.

"No babe it's NOT confusing, it means most effective tactics available and that's why I said you looked fucking stupid picking Doomfist."

Show your passion by letting out a bloodcurdling shriek when you get no-scoped by a fucking loser 14 year old while your lady is next you you asleep, wasting the day away after all nighter at the hospital that she works at.

A real, mature couple will have some sort of oversized coffee table book. Frank Loyd Wright or Humans of New York are cool and all, but cannot match the stunning landscapes that Hyrule has to offer.