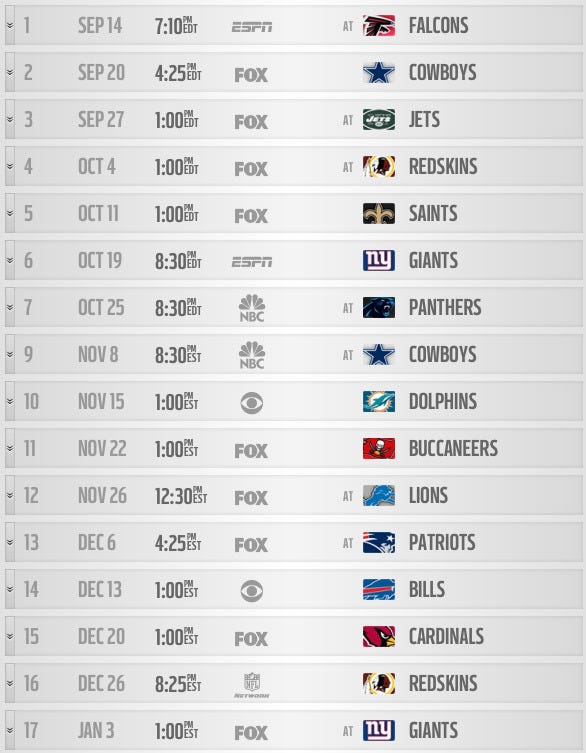 – Monday Night opener is fun till you realize 2 years ago they started off Mon with a win vs. Wash then promptly dropped the next three straight…

– Would have been nice to face off vs. the Pats that opening Thursday. Like it or not, that’s probably an L (even though we get 10 days to prepare and they’re coming off a Sun night vs Denver) so at least we’d get it out of the way with a mini-bye going into the next week.

– Speaking of which, I HATE the short week before Dallas in only the 2nd game. However, that home opener will be a drunken slugfest in South Philly.

– Other than that, there’s lots to like. I LOVE The Eagles will only leave the Eastern Time Zone once during the 2015 season with a trip to Dallas in Week 9. Less time on the plane is sports science approved. I think.

– Week 8 BYE is perfection. Facing Dallas again after the BYE is somehow even better.

– Love getting the Cardinals late in the season when they’ll inevitably be on their 8th QB of the year.

– 7/16 games will be nationally televised (with 5 primetime). Also, the Eagles are 6-0 all-time on Thanksgiving Day. Blow that up your Turducken and stuff it.

Overall my impression is the Eagles NEED to come out of the gates firing. With 4 of the 6 NFC Eastern Divisional games in the first 9 weeks, they can either make or break their season only halfway through the schedule. I’m not even going to make a prediction because it’s all blowharded bullshit conjecture right now. Realistically, there’s no reason this team shouldn’t be at least 10-6. Actually, they better fucking be at least 10-6 and win some playoff games. If they take a step backwards with everything Chip has done, then God help us all.