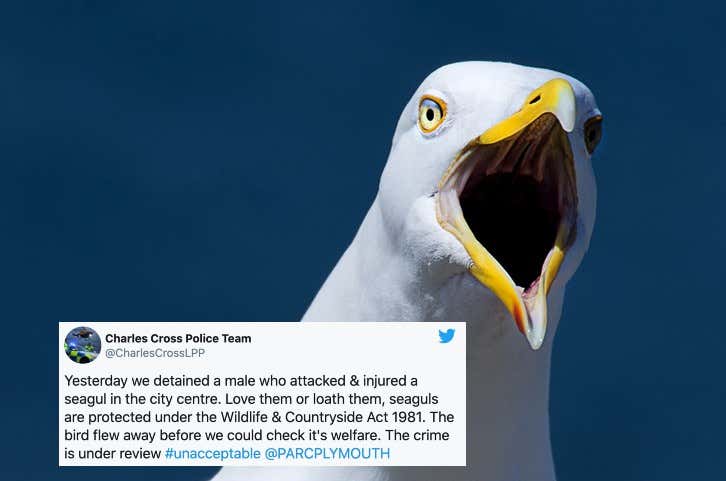 7news - Police have detained a man who allegedly attacked and injured a seagull in the port city of Plymouth in southwest England.

Charles Cross Police were on patrol when they spotted the man biting the seagull about 3pm on Thursday, the Plymouth Herald reported.

The local media outlet reported that the man had claimed the bird had attacked him for his McDonald’s meal, and in a bid to respond, he grabbed it and bit it.

Do seagulls realize how lucky they have it? Because these rat bastards really seem to be taking advantage of a great situation they have here. These fuckers are protected under laws. Meanwhile, that McDonald's that the seagull was attempting to snatch out of this dude's hand? Listen. I realize McDonald's probably isn't using real chicken but for the argument's sake here, that seagull was attempting to snatch another bird that was slaughtered, chopped up and fried into little nuggets for that dude to consume. Moral of the story is that one bird here was raised to be slaughtered, the other bird is protected under the "Wildlife & Countryside Act 1981".

You'd think that seagulls would want to be a little nicer to humans so they don't end up with the same fate as chickens but no. They have done the complete opposite, actually. They are the biggest assholes on the planet. And if they're going to be the biggest assholes on the planet, then that's fine. As long as they understand its an eye-for-an-eye. If seagulls want to constantly rip the food out of human's hands, then they get turned into food themselves. This is officially a war.