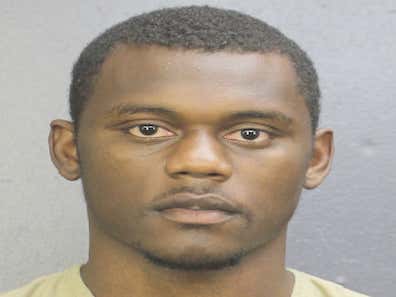 Ahhhhh, the DeAndre Baker saga. 2020 has been such a rollercoaster bumper cars ride, I was hoping this was one of those things that would just be resolved one day out of the blue. I'm not sure how, but that's what I hoped.

However, turns out that's not the case since a report dropped tonight that just opened up a whole other can of worms and potentially some new charges.

Of course we had the report of Baker and Quinton Dunbar robbing a bunch of people at a party, which honestly feels like it happened a decade ago, instead of less than TWO MONTHS AGO.

Which led to Baker's lawyer saying a bunch of witnesses changed their story about what happened that day.

Which led to everyone on the internet saying it sounds like those changes probably happened after a whole bunch of money showed up at those people's houses. We all had a good laugh and went about whatever we did in quarantine two months ago.

Well today, the Daily News got their hands on a warrant and it turns out things reportedly went very Florida very quickly.

It was both the crime and the cover up. At least that’s what a search warrant obtained exclusively by the Daily News seems to indicate in the case against Giants corner DeAndre Baker and Seahawks corner Quinton Dunbar for an alleged armed robbery that occurred on May 13 in Miramar, Fla.

The explosive warrant, obtained as a public record from the Broward County (Fla.) Clerk of Courts, seeks access to iCloud accounts associated with Baker and Dunbar. The warrant cites evidence collected through previous warrants, which includes video footage and direct messages that allegedly show witness Dominic Johnson oversaw the payoff of Baker’s and Dunbar’s four alleged victims on May 15 at the office of Dunbar’s attorney, Michael Grieco.

“I made them same n----s that said they got robbed come in and say them Boys ain’t have nothing to Do with it,” Johnson allegedly wrote on May 16 in a series of incriminating direct messages on his Instagram account, @powerballnick_305. Johnson is the witness referred to as “Coach” in the original arrest warrant who told police that he has known Baker and Dunbar since they were children. He advertises himself as the CEO of LOCKDOWN PROMOTIONS, a nightlife promotions company based in Miami, and has connections to several NFL players through coaching locally.

Nothing like the ol' The Internet Is Written In Ink, Even In Your DMs lesson!

Detective Mark Moretti of the Miramar Police Department, who submitted the warrant reviewed by Judge Marina Garcia Wood, also reveals alarming direct messages between Baker and Johnson on Instagram that implicate Baker in the payoff. “Johnson is telling Baker to come to Dunbar Lawyer’s office,” Moretti writes. “Baker replied, ‘Yo I’m in the city now getting cash how much to bring ?? I’m tryna get there too u ASAP.’”

“There appears to be several phone calls between Baker and Johnson,” the warrant continues. “Johnson appears to be nervous by telling Baker, " Yooooo these people finna leave.”

Followed up with the classic There Are Cameras Fucking Everywhere In The World In 2020 lesson!

Then, according to the warrant, CCTV video evidence shows Grieco, Johnson, an unknown individual, and the four alleged victims at the attorney’s office on May 15 appearing to make the payoff. This new warrant says that in the video, Grieco is seen leaving his 24th floor office, taking the elevator to the lobby, and bringing Johnson and the four alleged victims back to his office at 2:26 p.m. Johnson eventually leaves the office and meets an unknown person in the lobby, according to the warrant. And then Johnson and the unknown person take the elevator up from the lobby at 2:34 p.m.

During that elevator ride, the unknown person removes a “black bag” from his shoulders, “opens it and removes money.” The person also “shows the open bag to Johnson and you can see a large quantity of money. Johnson then takes the bag,” the warrant reads. Then everyone meets in front of Grieco’s office before going inside. By 3:15 p.m., everyone has left the building. And at approximately 4 p.m., Moretti says he received notification from Grieco indicating there had been a change in testimony from the victims and witness.

I'm not sure if it's because I am in my 7th rewatch of The Wire and I have learned to appreciate the art of crime as well as detective work. But carrying a giant black bag of money that you open and remove the cash from is just sloppy. Why not just carry a giant burlap sack with a dollar sign on front instead and really own it?

Wanna go back to the incriminating Instagram DMs because reading other peoples DMs make you feel scandalous? Cool, me too!

Johnson’s Instagram messages to friends about his involvement in the case, quoted in the warrant, are particularly damning. “We all heading to the lawyer now to get the charges dropped I got them n----s to sign the papers,” Johnson allegedly wrote in one message on May 15. “Got them same n----s that said they got robbed to say they didn’t … Same n----s that got robbed I made them fix that sh-t.”

“What happened?” a person whose name is not disclosed asked Johnson. “They got mad cause the other dudes won the money,” Johnson wrote. “Bra that sh-t ain’t go nothing like that,” he wrote in another message the same day, according to the warrant. “3 ball players was meeting up to play against each other in madden for the money and the only way n----s was invited cause they was nfl n----s no street n----s so everything was supposed to be safe and everybody knew who everybody was cause they played against each other in the season. One got mad felt like the other one was cheating and took his money back. I got caught in the middle cause I invited the two dudes from the crib so that’s how they put me in the middle. I never told on nobody.”

Honestly, it feels like the only thing missing from these reports is 4K video of lawyers saying "Here is the money you get for saying these two guys RIGHT HERE (points at defendants) didn't commit a crime" like Sea Bass as the boys.

Now in my book and the book of the United States Justice System, everyone is innocent until proven guilty. Especially if they have a super lawyer with a super name and super hype video like Bradford Cohen.

Also working in DeAndre Baker's favor is that I trust Pat Leonard as far as he can throw me.

Big Brain Bradford has already responded for his client on social media, which is always a sign of innocence in my book.

And again, it's Pat Leonard reporting this, whose approval rating is somewhere around Ereck Flowers in Giants fans' eyes.