The All-Star Game goes to extra innings for the first time as the National League wins 4-3 at Comiskey Park in Chicago in 14 innings. The game is won when Red Schoendienst of the St. Louis Cardinals hits a home run off Ted Gray of the Detroit Tigers. The National League had tied the game in the ninth inning when Ralph Kiner of the Pittsburgh Pirates of Tigers hurler Art Houtteman.

The All-Star Game returned to the Southside of Chicago for the first time since the first mid-summer classic was held at Comiskey Park in 1933. Through the early years, the American League had dominated winning 12 of the first 16 games. Casey Stengel managing in his first All-Star Game tabbed Vic Rashi of the New York Yankees to start for the American League. While Brooklyn Dodgers manager Burt Shotton picked Robin Roberts of the Philadelphia Phillies to toe the rubber for the National League.

The National League drew first blood when Jackie Robinson of the Dodgers scored on a triple from Enos Slaughter of the Cardinals. Slaughter would score on a sac-fly by Hank Sauer of the Chicago Cubs. The American League got their first run in the third inning when Cass Michaels of the Washington Senators scored on a sac-fly hit by George Kell of the Tigers. Kell had a second RBI on a sacrifice fly to tie the game in the fifth inning against Don Newcombe of the Dodgers. One batter later, the AL took the lead as Larry Doby of the Cleveland Indians scored on an RBI single by Ted Williams of the Boston Red Sox.

The American League had a 3-2 entering the ninth inning, Indians hurler Bob Lemon who allowed one hit in three innings. Art Houtteman of the Tigers who was in his third inning of work was looking for the save. Leading off the ninth was Ralph Kiner a slugger who was the National League’s premier home run hitter. The Pirates slugger ripped a homer that tied the game. The American League would not be able o answer as the game was tied 3-3 after nine innings.

After the American League took the lead in the fifth, their bats were silenced as Jim Konstanty of the Phillies pitched the six, striking out two batters. In the seventh inning, Larry Jansen allowed one hit over five innings of work. Allie Reynolds of the Yankees allowed one hit in three innings after coming in the game at the start of the tenth inning. Ewell Blackwell of the Cincinnati Reds came on to pitch in the 12th inning and continued the work of Jansen by keeping the American League off the bases. 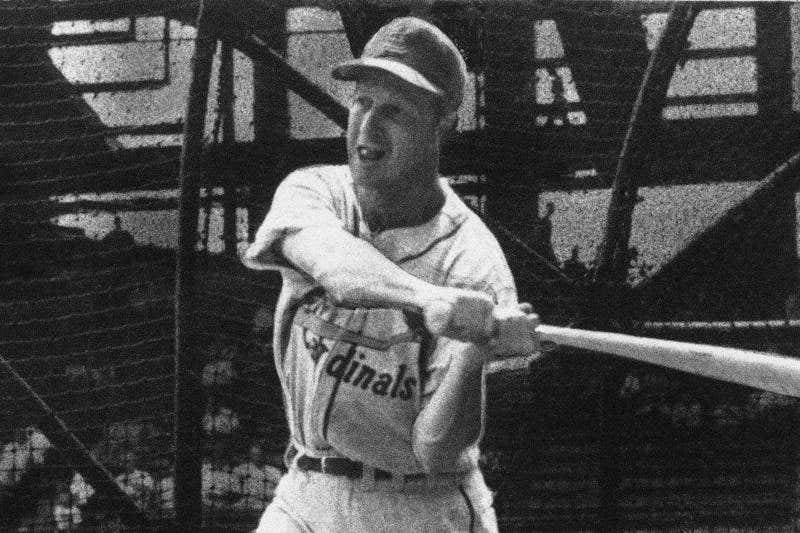 In the 14th inning, Red Schoendienst of the Cardinals hit a led off home run off Tigers hurler Ted Gray. Gray also allowed a hit to Andy Pafko of the Cubs. Bob Feller of the Indians came on for the final two outs, as the American League which had not had a hit since the tenth inning, came up down 4-3, against Blackwell who had two perfect innings under his wing. Dom DiMaggio of the Red Sox grounded out to start the inning. Next up was Ferris Fain of the Philadelphia Athletics. Fain gave the AL hope with a single to left, as Joe DiMaggio of the Yankees came to the plate. There would be no heroics from the Yankee Clipper that day, as Joltin’ Joe end the game by hitting into a double play. 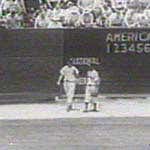 After the game, Ted Williams discovered he had injured his elbow when he jumped against the fence in left field to rob Ralph Kiner of a hit. Williams would miss most of the second half recovering from a fractured elbow.