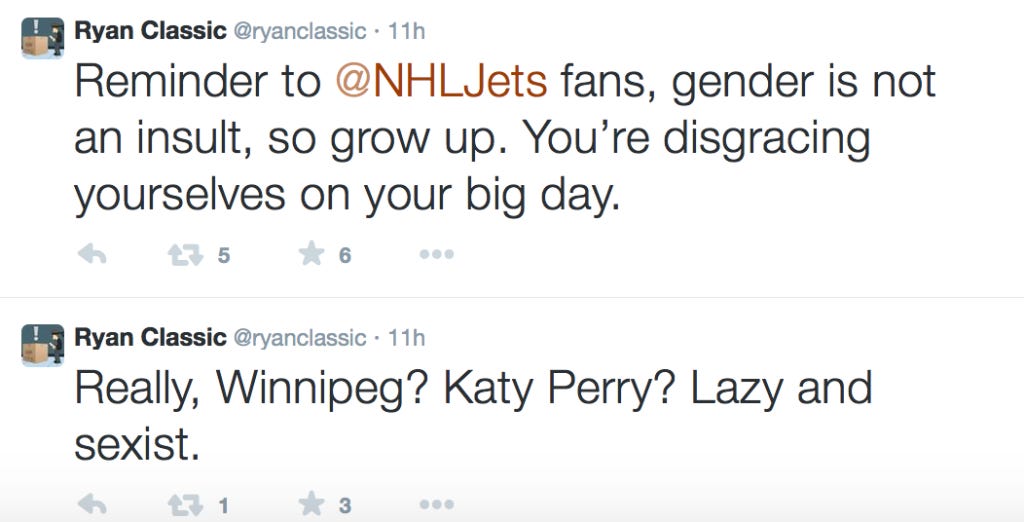 Saw this last night and immediately got a pit in my stomach. I knew this was coming. And until now, I’ve been avoiding mentioning it because I think sometimes the people yelling “people think this is sexist?!?” is way more overblown than the amount of people who actually think it’s sexist. But now I’ve seen it multiple places, now it’s not just random people on Twitter but actual reporters saying it, so now it’s real. I know when things like this happen common sense is thrown out the window and fury rules, but does anyone think that Katy Perry probably sucks at hockey? She’s a California Girl, they’re not known for their snap shot. It would be a super disadvantage to be her in a professional hockey game. And what if she wasn’t already a famous person? What if Katy Perry was just a regular girl name and that’s what they were calling Corey? Well then it would still make perfect sense. How many girls are on NHL teams? How many have ever been on NHL teams? One, and she stunk. When it comes to professional ice hockey at the highest possible level, women are inferior to men. That’s just a fact. Those are stone cold numbers. Being a girl is not a good thing to be when you’re on the ice at an NHL game. It’s not speaking to the sex as a whole, but in that very particular instance of playoff hockey it would behoove you to be a man.