Seriously, what did we do to be this lucky? A few days ago when I blogged how Nick Wright gave the Celtics a 0% chance to win the title was a gift from God, I thought that was going to be enough to last us pretty much the duration of the playoffs. But now we get some Jayson Tatum slander as well?

This is something you hear from pretty much every Celtic hater and every salty Sixers fan that tries to discredit the leap we've seen from Jayson Tatum this season. They try and say he was only good "in February" like it was a fluke or something. I'm not going to sit here and tell you Tatum didn't start off slow this season. He did, and that has been an issue for him the past three seasons but here's the problem with Nick Wright's rant. We can fact check his slander. Let's start with the Siakam dig.

He tries to make the claim that Tatum scores fewer points than Siakam, someone who I think we can all agree is a current star in the NBA. That's weird you see, because they both average the exact same 23.6 points a night which is good for 17th in the NBA. Do you think Nick Wright has that same dig towards someone like Zion, who also averages 23.6? He failed to mention it's also more than stars Joel Embiid, Khris Middleton, Paul George, Nikola Jokic, Jimmy Butler etc. You disingenuous asshole.

The next thing I want to talk about is his 3P% of 39.8% on the season. He again tries to take a shot at Tatum by saying that's not as good as Luke Kennard. Well here's the thing Nick Wright you jackass. When you take a look at the players taking at least 7.1 threes a night (what he takes) Jayson Tatum's 39.8% is the 8th best 3P% IN THE ENTIRE NBA. That's for the season, not just "February". How come he didn't want to mention that's a better percentage than Kyrie Irving, Buddy Hield, Dame Lillard, CJ McCollum, Bradley Beal, James Harden etc?

We can keep going. He wants to talk about how his entire season isn't that impressive and that there are no signs that Tatum can take a leap. Well, here is a list of players that have done at least what Tatum has accomplished in terms of production this entire season 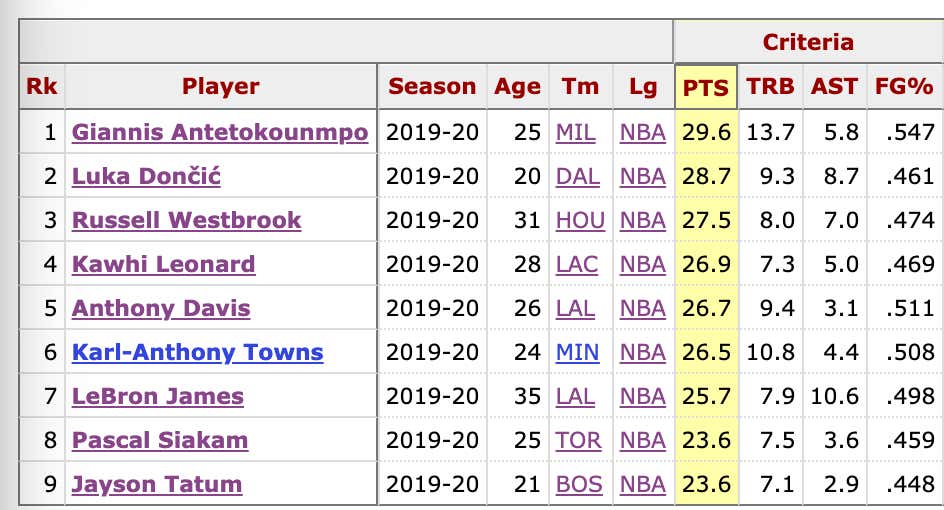 Are those good players? Hard to say. Kind of hurts the whole "he had one good month" argument huh. But guys, his PER is under what Sabonis put up!

I wonder what Nick Wright would say if you used this same line of reasoning when talking about his binky LeBron. He averages fewer points than Devin Booker, has a lower FG% than DeMar DeRozan, has a worse 3P% than Collin Sexton, and a lower PER than Dame Lillard. By Nick Wright's method, he's worse than all those guys right? Of fucking course not.

So once again I would like to say thank you to Nick Wright. He to this day cannot understand that this is not how you troll Celtics fans. This only brings us joy. If he wanted to troll he would take the exact opposite stance on Tatum. Hearing Nick Wright say he is confident Tatum is going to take a massive playoff leap would strike the fear of God in me. But this? Out of context statistics that are used in an effort to slander him? By just looking at random names that may have a higher percentage as a means to slander him? That's the good stuff. That's what gives me so much hope.

We know he can't help himself. He hates the Celtics with a passion and his talking points are what every single troll goes to. I deal with it every day. The fact is whenever I hear someone try and make that argument using this reasoning, they don't realize they are exposing themselves. They're terrified that the Celtics got it right with Tatum and he's going to be a force for the next decade.

The kid is a stud, and Nick Wright and all the other salty trolls out there are just going to have to deal with it