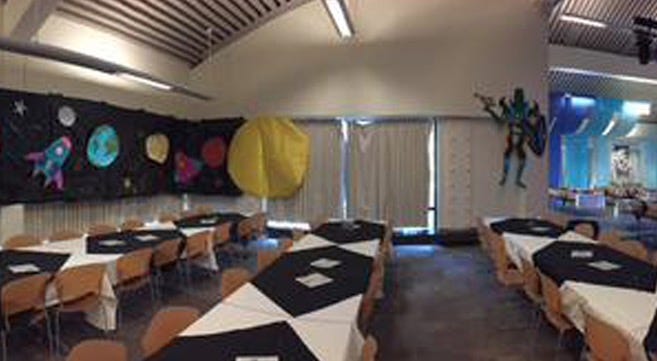 Fox News – A California college has apologized for its “insensitivity” after serving Mexican food at an official school night party whose theme, “Intergalactic,” included decorations featuring aliens from outer space.

In a letter addressed to its student body, Stevenson College – which is part of the University of California, Santa Cruz – said it received complaints from students and others within the university who were offended by the decision to serve Mexican food at the Sci-Fi party because of its perceived connection to the immigration debate.

The term “illegal aliens” is sometimes used to describe people who cross the U.S.-Mexico border without documentation, but many Latinos and immigration advocates consider it pejorative.

“We would never want to make a connection between individuals of Latino heritage or undocumented students and ‘aliens,’ and I am so sorry that our College Night appeared to do exactly that,” reads the letter, which was written by Carolyn Golz, a student life administrator.

Golz said the incident “demonstrated a cultural insensitivity on the part of the program planners.”

Now, as a result of this “poor decision,” the university is requiring cultural competence training for all students interested in putting together on-campus programs as well as other safe guards that “will ensure college programs are culturally sensitive and inclusive.”

“For [the sci-fi] event, students landed on Mexican food because they weren’t sure what food would work with the intergalactic theme,” a college spokesman told Fox News. “It sounds like an honest mistake – choosing a food for college night without thinking about how it could be perceived by others. The students decided on Mexican food as they hadn’t had it yet this year.”

China, North Korea, Russia, they’ve got to love this shit. It’s like one gigantic map being provided for them knowing exactly where they can invade and launch their attacks to take our ass over. Where is the weakest, pussiest spot in the country we can make our initial wave? Boom, Stevenson College, where they force everyone to apologize and require cultural competency education training for everyone on campus for serving burritos during Intergalactic Space night.

Seriously that’s a serious stretch you have to make to get upset about that one. Basically giving your brain a mental workout trying to connect the dots and feign outrage for this – intergalactic, space, outer space, aliens, illegal aliens, the immigration debate in America. I’m sure that EXACTLY what the dorks setting up a fucking space themed student party night were thinking about.

“This seems a bit of a stretch,” said Geraldo Rivera on the Fox News Channel’s Fox & Friends on Friday morning. “This seems like political correctness gone way too far, and now they are going to get much more inferior food at their next gala for fear of offending.”