Before we even get started on the Cubs I think it's worth throwing this out there to set the tone of my brain. I honestly can't help myself from not taking the 2020 MLB season seriously. Even if you want to disregard the last couple months and overwhelming public embarrassment, you can't discount the looming fear that a 60-game season in 66 days under the present circumstances seems impossible. And as the poll suggests, my fears are neither alone nor unsubstantiated.

Personally I haven't been able to shake my gut instinct. I've nearly spent every working day of quarantine alongside WSD and our pure visceral reactions to MLB developments have been nothing short of diametric opposites. And along the way I've come to repeatedly question the source of my pessimism without luck. It just doesn't feel like they're playing baseball this year has echoed in my head since March and I still can't shake it. Not even weeks out with the agreement in place and schedules announced will it leave.

Whether we (read: sports fans, collectively) get MLB playoffs or not will largely come down to innumerable uncontrollable factors. Even if it feels like this could blow up at any second, and even if it very well could, we're better off taking it one day at a time and trying to enjoy the moment. No matter how hard that may be for all you Comcast subscribers:

So let's start there.

Where Can You Watch The Cubs? Not everybody has it, but the answer is Marquee Network. It's available on Hulu for what likely amounts to about 6-months worth of car insurance. But it's also available through several other distributors with the notable exception for Comcast, Chicago's undisputed leader of cable and internet services. The underlying dynamics creating this situation are hard to describe without me sounding like a real bitch. So let's just agree that it's pretty fucking stupid the Cubs and Comcast haven't figured this one out yet. My hunch says it will come days before the season and won't be ready by opening day to a majority of Comcast subscribers. But that's just me playing more instincts. In a perfect world I'm wrong about everything I've said so far and Marquee Network will be available for all 60-games that encounter no delay in scheduling due to MLB-wide mismanagement.

Whether that happens obviously remains to be seen. All we can do now is pray, hope and move forward with an overly detailed breakdown of a season that might not happen.

Knee Jerk Reaction = I obviously love over 32 wins for the Cubs at -105. I think that's a no-brainer as a fan, but that's also long before you dig deep on the Cubs' pitching staff that features Tyler Chatwood and Alec Mills shouldering the 4-5 rotation spots. In some respects the pitching is disgusting to think about, especially considering that so many relatively-under-funded organizations are absolutely BODY BAGGING the Cubs in hometown pitching development. Sometimes it's going to feel like we're trotting corpses out to the mound in later innings and I'm here to say that's okay. We're trending back to offense anyways so let the big dogs eat in the lineup and pray you can limit 6 runs on a good night.

Another thing to remember though is the difference across these 60 games should be minimal. 32 wins is a .533 win percentage while 33 is .550. That's the difference between 86 and 89 wins. I know you guys aren't math majors but that's a significant jump when you really think about your comfort level. Another factor heading that direction is that the Cardinals (31.5), Brewers (31), and Reds (32) will comprise 50% of the Cubs schedule. The whole thing reeks of .500 baseball for everyone involved.

The Speaking of divisional opponents, here's a phenomenal representation of the travel:

The Cubs are slated to have the 2nd least miles traveled in MLB behind the Brewers at 4,071 total miles. Pretty huge when you consider the Rangers are dead last at 14,700 miles with the average somewhere close to 10,000. That's actually a huge advantage when you further consider 66 games in 60 days is a lot of fucking games. And even more important is that your superstars must play everyday. Imagine the advantage if the Cardinals lose Goldschmidt to testing or the Brewers get an outbreak and their starting outfield sits. My point is the superstars don't have the luxury of skipping a day in the spirit of 162. So if you're telling me the Cubs are 60% less than league average on travel, I'm feeling pretty fucking good.

- Infield: Lost in the shuffle is the fact that the lineup goes Bryant, Rizzo, Baez in that order which begs the question if that's the best 1-2-3 infield in baseball. My gut says yes but I'm biased. Point is no one wants to talk about it because there's more clicks to speculate if KB is going to sign an extension or to talk about how cute Anthony Rizzo's dog is. Deep down though, you know the real story is that the Cubs employ a top-3 player at first, short and third.

- 4-5: Mix in Willson Contreras at catcher and Schwarber at DH and the 1-5 is objectively nothing to fuck around about. I don't say that lightly. There are more expensive 1-5's and there are certainly more spreadsheet-dominant 1-5's but there certainly aren't a ton that represent the core of a World Series champion that's accomplished more than any group of 5 players in their respective franchise's history. If you asked for a grouping of the 5 most successful position players to play together and accomplish something with the Chicago Cubs, you'd get the 5 guys that will be kicking off virtually every lineup in the 2020 season. Not robbing anyone of individual success over their Cubs' career, but there's something to said about what these 5 guys have done together.

- Yu Darvish & Kyle Hendricks are Severely Underrated: did you know Yu Darvish had a 17-1 strikeout-to-walk ratio in the 2019 2nd half? He did it in 13 starts over 82 innings of walking SEVEN guys vs. 118 strikeouts. The people that are still bitching about Yu's contract probably didn't know that he turned into a top-10 starter in MLB the last 3 months out in 2019. Now we're hearing he's got a new pitch that's scaring the shit out of everyone and it makes you wonder if he can still take another step in his career? FWIW he holds MLB's All Time Record for strikeouts per 9 innings at 11.1 and last year he went 11.5. There's more tread on the tire and a 60-game season could be the perfect recipe for a 12-start masterpiece.

Opposite him at #2 in the rotation is Kyle Hendricks. I went super deep last year on how he'd be better if we could just skip the first 2 months of the season and it appears we'll get to test that theory.

While we can speculate about how much Yu has left to give, it's pretty obvious Hendricks can still get to another level. His last 4 bWAR totals read: 5.4, 3.5, 3.1, 4.0 while averaging 30 starts a year at a 3.01 ERA with an 89-mph fastball. The more command over his stuff and the more MLB shifts away from his style, the bigger the beatdown he will be poised to deliver. Comfortably though, you can pencil him in for 12 starts behind Yu Darvish which gives you 24/60 games started by bonafide #1 arms.

- Depth: Almora definitely blows at this point, but mix in Happ, Bote, Kipnis, Nico, Souza and Heyward and you have a pretty solid fucking group to fill in 6-9 every night. Personally I need to see Ian Happ start at least 45 games but that's just because I'm a logical fan that wants to see the best players play. After that you can get really creative with your matchups should David Ross buck the Joe Maddon Trend and actually entertain front office strategies.

- Starting Pitching: Lester isn't any younger. Quintana just cut his thumb off. Tyler Chatwood fucking BLOWS and we have practically no depth after Mills. For all intents and purposes, this is doomed before it starts, making it that much more important Hendricks and Darvish pitch to their potential. Otherwise you just wasted your time reading this blog and hoping the Cubs would have a good season.

- Relief Pitching: I promised myself I wouldn't get into the weeds here because I don't want to get upset unnecessarily. At the same time though, the bullpen is so fucking bad that you wonder if the Cubs are doing this on purpose. I just went through the depth chart and almost cried. Kimbrel is okay. Jeffress is a project. Wick was good last year. Kyle Ryan wasn't horrible at times. And then after that it's a bunch of AAA arms you may have read about in Baseball America back in 2014. Guys like Rex Brothers and Danny Hultzen here to save their careers when everyone else is unloading bus after bus of 98+ minor leaguers. Literally it makes me sick to think about so let's stop here and pray there are 2-3 guys we've never heard of that can emerge.

But then also remember that emerging as a reliever becomes so much harder when you only have a 60-game season and a 3-batter minimum. The stakes are that much higher where you can't put a guy in and hope he figures it out. That means there's an advantage to clubs with established bullpens and safe to say the Cubs are complete opposite of that right now.

- Pitching Pitching: Just be ready for some long nights. 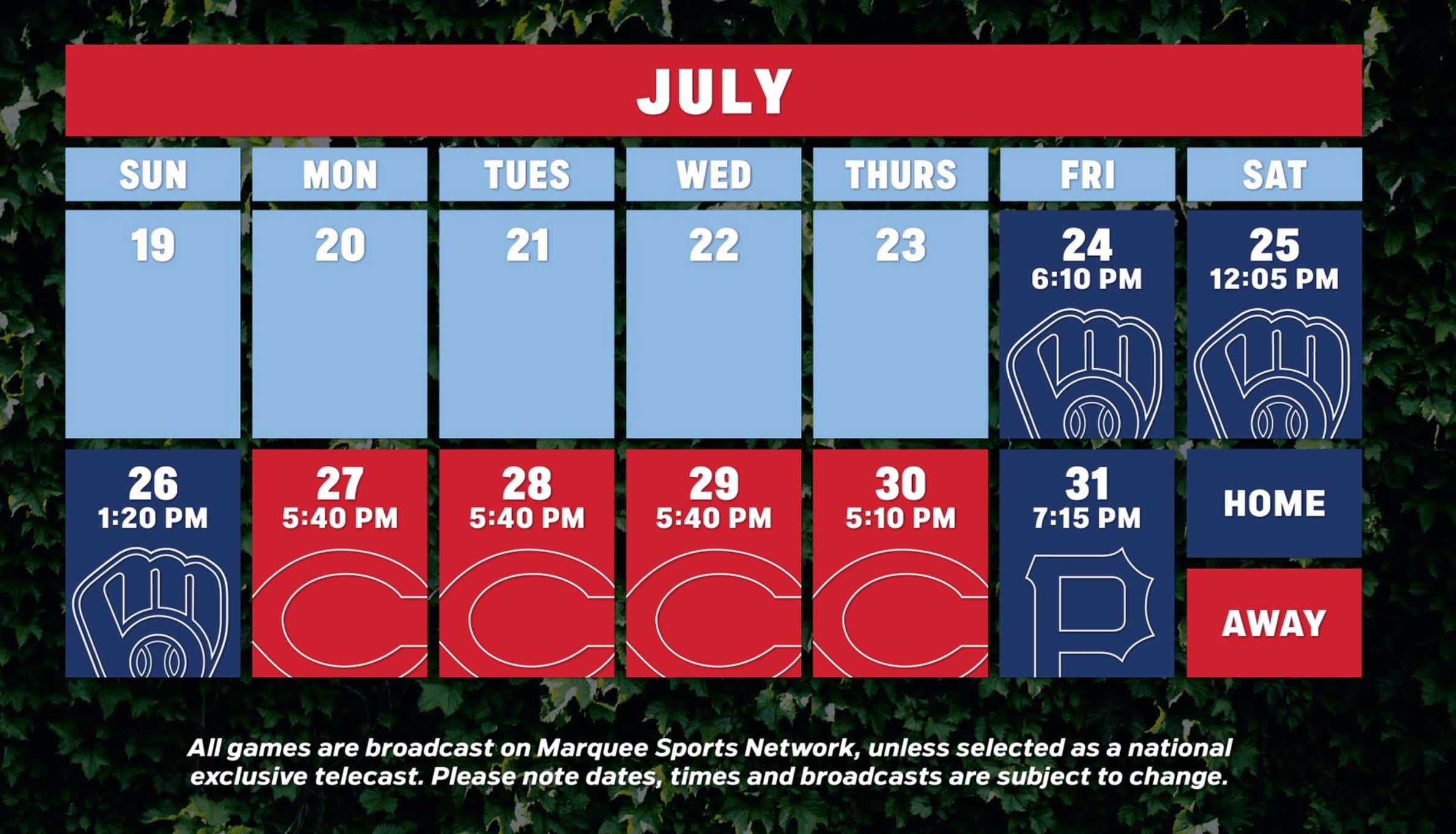 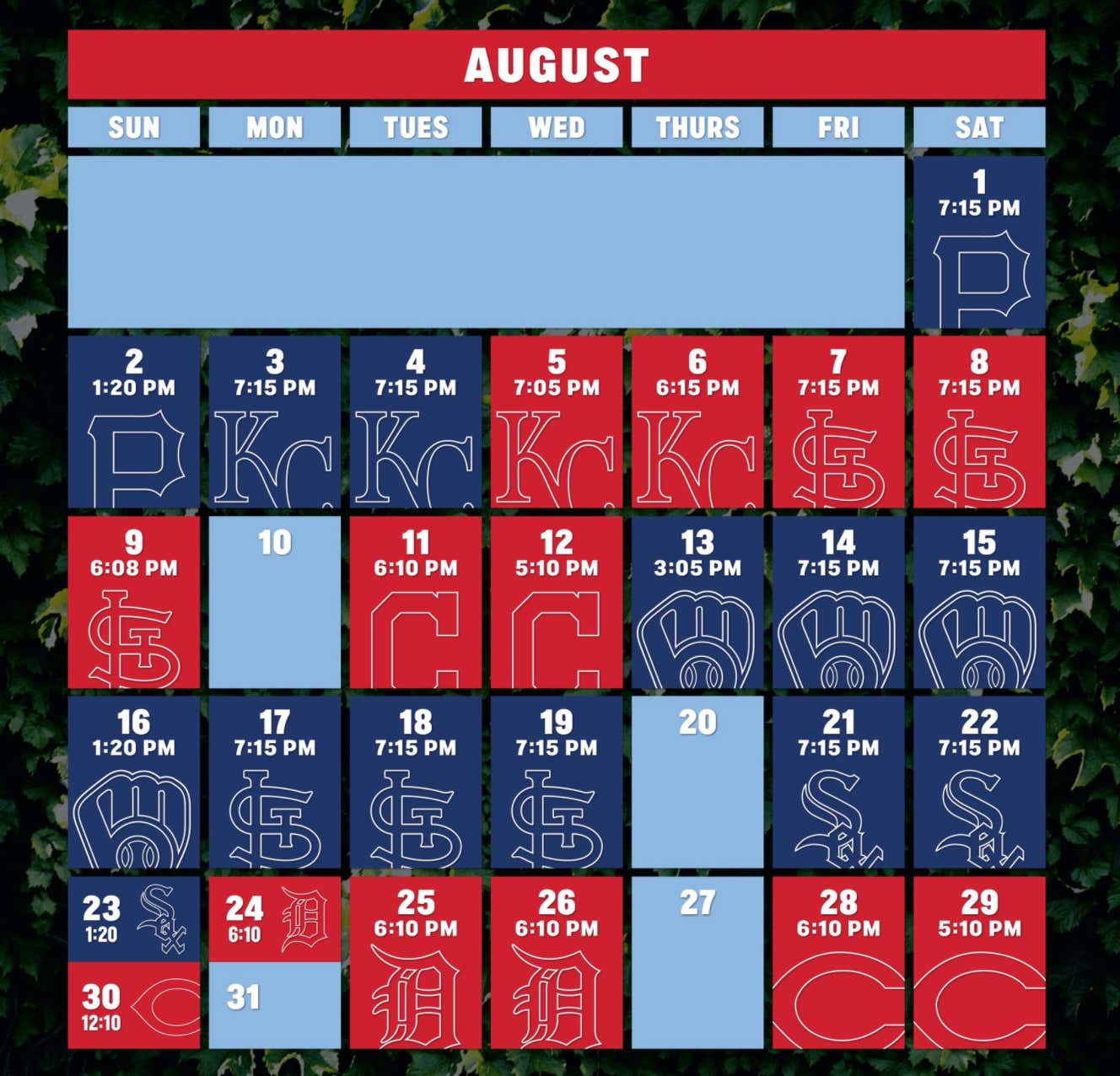 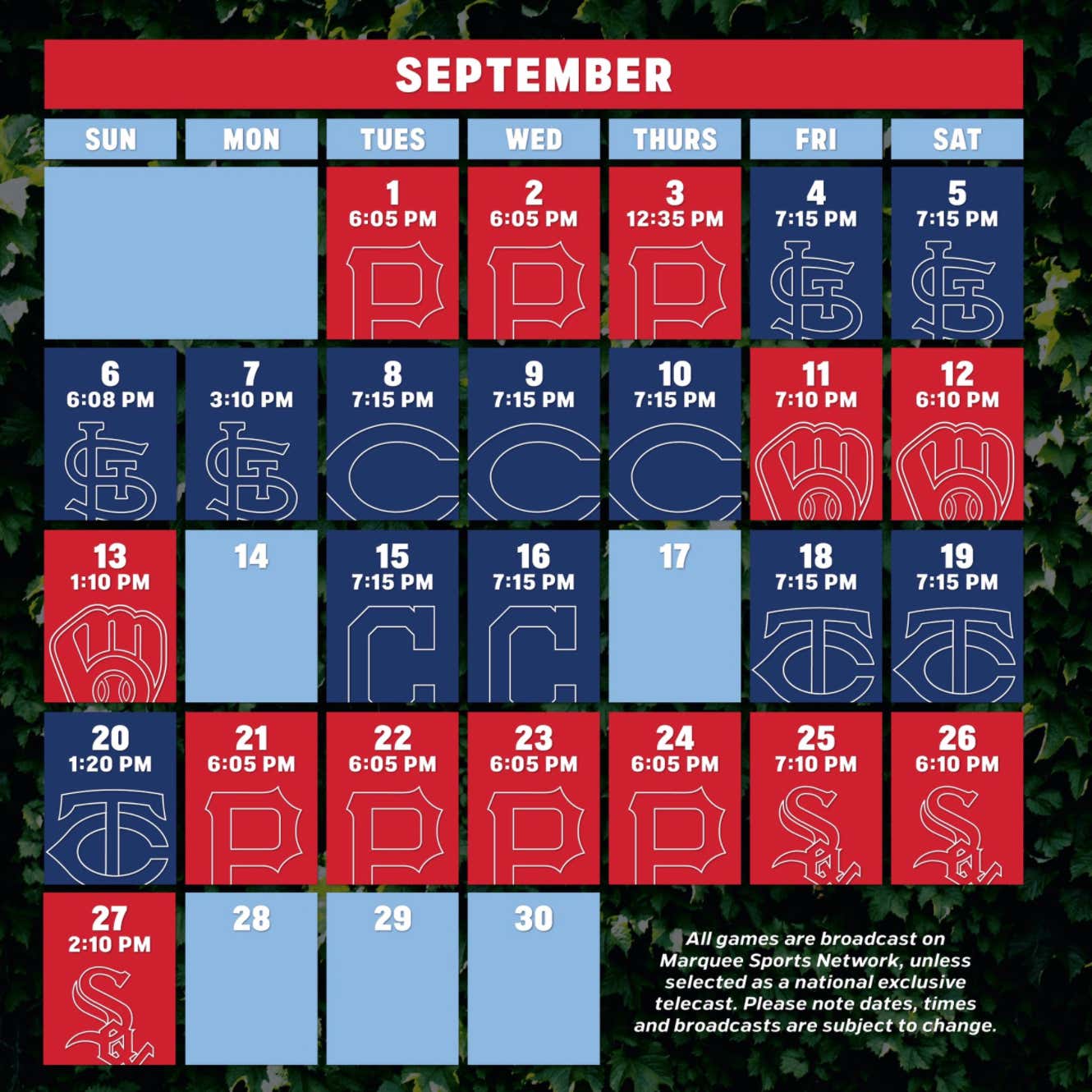 - 14 of 20 against the Cardinals/Brewers are at Wrigley is enough of a reason for me to go absolutely ballistic if the Cubs don't win the division. I mean you could honestly argue MLB is actively giving the Cubs a leg up with that schedule. Preposterously unfair that the Cardinals and Brewers only get 3 games each at home against the Cubs. Let's take advantage of it.

- The September opponents aren't easy by any stretch but you have to love that the tough ones are all in Chicago. 3 against the Cards. 3 against the Reds. 2 against Cleveland. 3 against the Twins. 3 on the Southside. That's such a huge advantage to mix that schedule against 7 road Pirates games and a trip to Milwaukee. Again, reading tea-leaves this screams MLB wants the Cubs on TV in October and who could blame them?

- The last series of the year could decide the fate of both Chicago baseball teams for 2020. I've been waiting for this for years, but now that it's here, I'm profoundly uncomfortable. There's going to be so much shit talking and crying and just people being pussies I'm not sure I can handle it. But then I think about all the Red Line Radio World Series babies that will be coming due in late June of 2021 and it makes me happy. More importantly though, the time of us being cordial while the other blatantly sucks has come to an end so all you White Sox fans can kiss my ass.

- Good Luck to David Ross. He probably doesn't need it, but I'm giving it anyways. For what it's worth, I personally think he has the makings to be one of the greatest managers of all time. All we need now is some goddamn baseball to prove it.