Welcome to the Sunday Sermon where this whole topic is about male nudes...when to send them, more importantly when not to, and what makes a good one.

Girls start receiving unsolicited dick pics around, ehh, maybe 16? At first, it's sort of exciting. A thrilling dirty secret; your mom would be SO disappointed... You haven't had a plethora of male attention so far and you haven't been scarred by the fuckery of young men just yet so a random eggplant photo is a big-time turn on.

No matter the size, the flaccidity, the background, the quality of the photo. Someone wants you. And that photo is proof.

Later, the excitement of it wears off. You start to understand this picture might not have been taken for you, it may have been taken for Jenna, six months ago and now this photo is like spam smut, something sent out in mass to god knows how many women, SIMULTANEOUSLY. You realize that not all nudes are created equal, some dick pics really aren't attractive for a variety of reasons, and the result is not excitement, but disappointment and even disgust.

Anyway, I recently got a DM from a young man with Uncut Gems' Adam Sandler as his avi asking me if I could give him advice on his dick pic game.

I of course, said no.

He hit me up again.

He started to get annoying, which is when I had the seed of an idea. He seemed like the kind of dude I could use to teach a lesson about. On a Sunday.

In the form of a Sermon, if you will.

After stringing him out over the course of many months, I was finally ready to say, "fuck it," and take a look.

The things I do for you people. I swear. I should get hazard pay.

Not shockingly, this man was like an eager puppy, jumping up on the furniture. He almost immediately sent me two photos, one from the shower and one from his bathroom.

I would like to take this opportunity to make my initial point. You only get ONE chance to make a first impression. And when it comes to dick pics, it's NEVER a good idea to send photos from your bathroom. It just shows how gross of hygiene you (and nearly all guys) have. And this is not a good way to make yourself appear sexually appealing, regardless of what you're packing under those boxers. Clothes tossed on the floor in view, toothpaste on the mirror, sink in disarray, toilet seat up, all something that screams, "I probably smell like an Oklahoma drill."

So since the first photo was an unoriginal picture of just his dick in the shower (I'd rate it a 2.5 on the Balls Scale), let's go for the most aesthetic of the two pictures -- the one from his bathroom. You know what that means.

If you didn't know already, women are MASTER DETECTIVES at sniffing shit out. Take this recent viral tweet about how tall a guy is as Example #1 at the lengths we'll go to examine a photo. 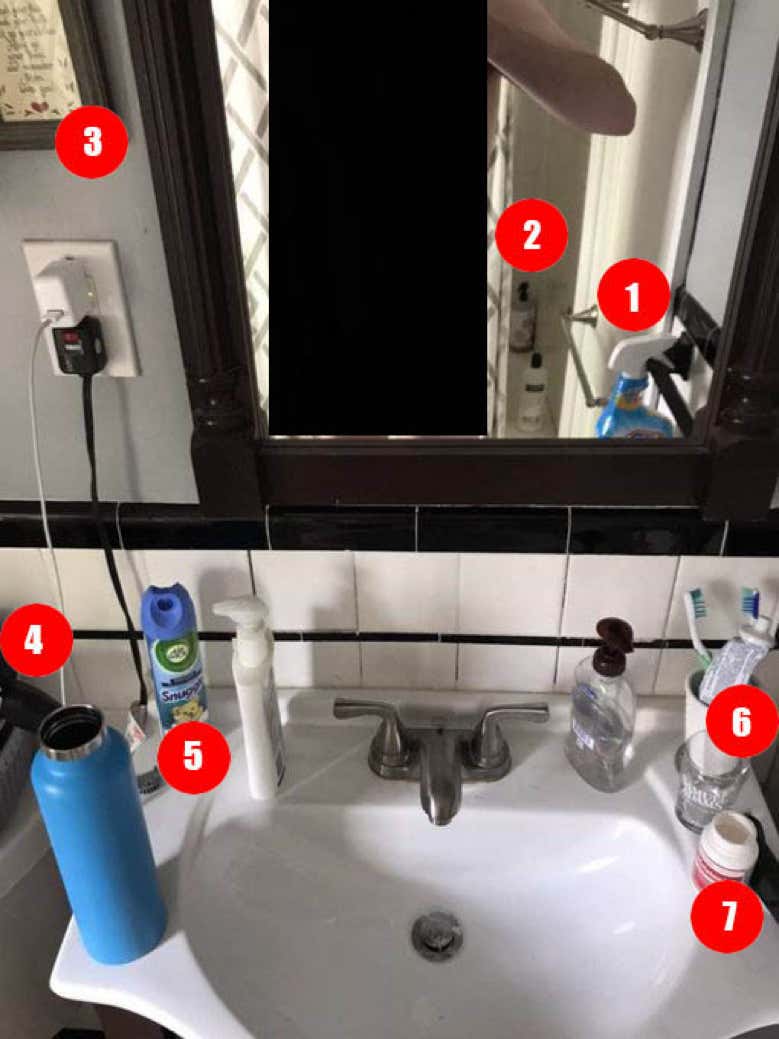 So in a similar vein (see what I did there?) here's what a cursory examination of this guy's dick pic uncovered:

It's probably not a good sign of how clean you or your living space is if you have a LARGE ass bottle of mildew cleaner hanging from your towel bar. Nothing says, "ooh sexy" like rampant fungus growing in the bathroom. I can promise you this, most women won't have sex with you if they think they need to wear flip flops in your shower to prevent getting athlete's foot or MRSA. Please hold while I shake off the PTSD from co-ed dorm living.

2. Women's Shampoo and Conditioner In Bulk

I'm sorry, WUT. Either you are one of the best Airbnb hosts on the planet, have a female roommate, or LIVE WITH A FUCKING GIRLFRIEND. It honestly doesn't matter whether it's door 1 or 2, the first thing ANY GIRL is going to think is that it's door 3, because 99% of the time it's the TRUTH. And YOU will look like a bigger scumbag than your shower floor.

OH BOY. Another touch of a woman. I don't know one man that would willingly put this art on his bathroom wall. A movie poster? YES. A framed photo of Clown Goodell? Absolutely! But what we see in example 3 is something that you find deep in aisle 17 at Michael's or in the clearance section of Linens & Things. Another piece of evidence that will be used to indict, and keep you from your sexy time.

4. Hair Dryer In A Basket Of Other Hair Shit

SIGH. I mean, how long have you two been living together? No single man on earth has a full-size hairdryer in their bathroom CHILLING on top of the toilet. This SCREAMS committed relationship.

This is actually hilarious. I love the smell of fresh laundry (as do you) but I do NOT want that scent sullied with the smell of your poo. If I'm honest, I don't believe you bought that for yourself. Most likely, your girl got that for you on a Target run, to try and make the communal space slightly more livable after your Friday night Pizza and beer bender.

6. Two Toothbrushes In A Cup On The Sink

Now I know you're not just roommates. Roommates DO NOT have their toothbrushes spooning, kanoodling even for an indefinite time, especially in the age of Corona. Are you two getting married soon? Maybe you already ARE married.

I mean, I respect that you're taking your sleep seriously (it's very important), but for gods sake, can you put the cap back on? Can you put ANYTHING away after you use it? Between that open melatonin bottle and the open MASSIVE hipster hydroflask on that tiny ass sink? I'm getting serious anxiety.

So yeah, suffice to say this dude needs a LOT of work on his dick pic. Which was my hope from the beginning. Again, I do this all for YOU.

SOME TIPS ON BETTER DICK PICS

So there you go. Some tips on what NOT to do when sending a dick pic, thanks to our intrepid hero with the live-in girlfriend.

Now because I love you and want your life filled with beautiful women swooning over photos of your penis, I am going to give you some simple and easy tips for upping your game.

Angles Are Key: This isn't just important for thiccc Instagram models, this is important for you and your eggplant as well. Shoot from a bird's eye view to capture whatever curve you have, and that curve is something that chicks like.

No Background Clutter: Avoid distracting background items (like pretty much anything that screams you already have a chick, like the guy above). What you want is LAZER focus on your dick.

Lighting: SUPER important. Make sure your photo isn't so bright that it looks like you took it inside of a shopping mall (RIP shopping malls), and not so dim that it makes us wonder if you live in your mom's basement (sorry Robbie). I've never seen a dick pick using the new night mode on the recent version of the iPhone, but experiment. Dim, soft lighting with enough emphasis on what you're trying to showcase. Natural light daytime light is obviously best and maybe run it through the kind of IG/VSCO filter that gives it more pop.

The Thing Is The Thing:  We women are used to deception. If you're going to send a nude, keep your hand off the merchandise, This is a move that guys tend to use who want girls to think they have bigger dicks than they do. Which of course every guy pretty much wants, but you get the point.

So there you go. I sacrifice for you, I really do, all in the interest of better dick pics. Because you guys are going to keep sending them no matter how many times you're told not to, so at least take the time to make them worth looking at for 2 seconds before we pass it around to our girlfriends. Follow this advice so we can all giggle at your tattoo on your happy trail instead of your girlfriend's prayer crochet framed on the wall in the background.