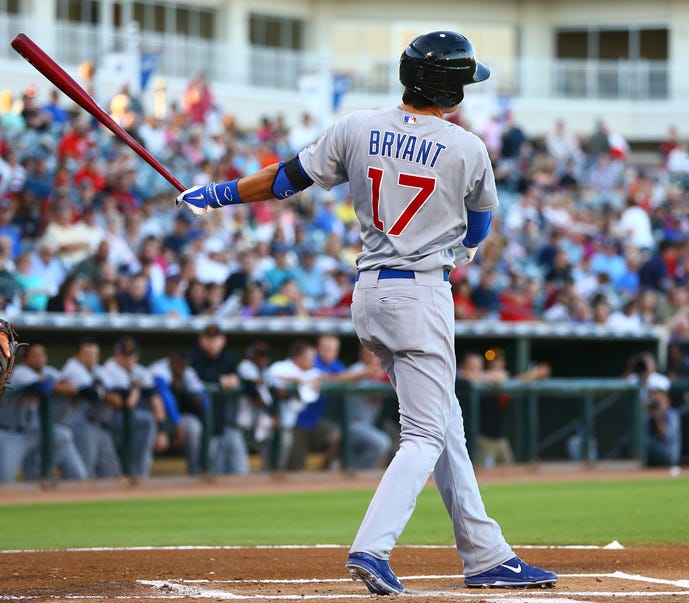 I sincerely hope I’m not breaking this news to you, but in case you haven’t heard, Kris Bryant is making his debut today. It’s going to be glorious. So to prepare, I reached out to an expert to breakdown some film of Kris Bryant’s swing for Barstool Chicago. Our source here is a former AAA outfielder and current MLB scout, and knows so much more about hitting than I (and probably you too) ever will about anything. Ever.

Real quick though, here are my very reasonable projections for Bryant:

For starters, he’s huge. I mean just fucking huge. 6’5, 230 easy so he’s got a strong lower half. He and Will Myers do this thing where they don’t “squash the bug” or turn their back foot. Instead, his back knee kinda just sags into where his shin would be and he kind of pops up into his front foot. He doesn’t turn. Everything goes right back up the box which gives him that power up the middle and to right. He has unbelievable oppo power because by coming up through the middle, he’s not swinging across the ball, so there’s much more backspin. He also keeps his bottom arm locked through contact, so he’s gonna get more lift and leverage on line drives. Oh, and he’s absolutely fucking gigantic.

He’s also really wide. He doesn’t stride so his timing is much simpler. He’s just so good. He’s long and big so you think you can get him inside, but he’s just a freak. You try to beat him inside and you can’t. Big league pitching is a different story because they’re just so good, but he hasn’t struggled with it yet in the minors and definitely didn’t in spring training. Now I don’t know if he’s a great hitter yet or if he’ll be a great hitter ever. He hit .329 as a minor leaguer but what does that mean at the next level for him? I don’t know. I know he hits the ball so damn hard. And I know when he’s up to bat you think he’s gonna hit it so far you just want him to strike out. He’s just incredibly intimidating in the box. He’s really different in that way. I think that if he just learns to swing at strikes, he’ll hit it a ton. Honestly he’s going to be really really good.

So you wanted to know what all the hype is about? Well there ya fuckin go.

See you guys at Sluggers.