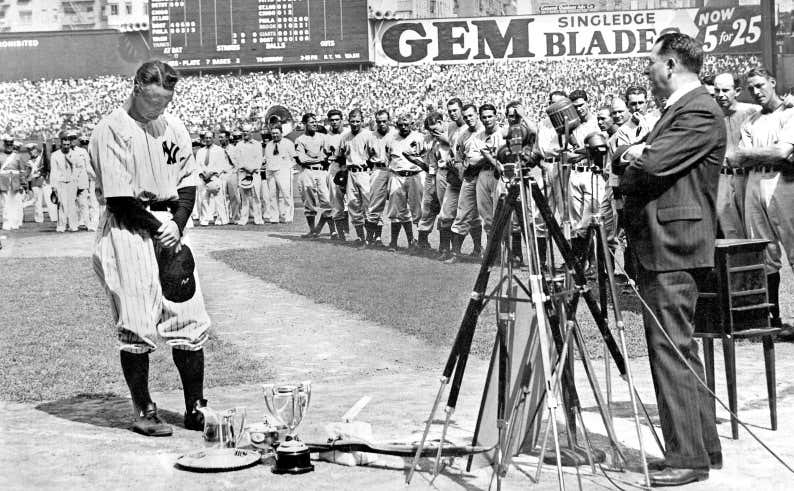 Independence Day becomes Lou Gehrig Day at Yankee Stadium, as the New York Yankees honor their stricken captain. Gehrig began the season with the longest consecutive game streak. However, from the start of the season, something was wrong as Lou Gehrig was batting .143 when the streak ended at 2,130 on May 2nd.  A short time later, he was diagnosed with ALS, a depilating nerve disease. Aske to speak, Lou Gehrig declares himself, “The Luckiest Man on the Face of the Earth.”

At the heart of Murderer’s Row were two superstars, with differing lifestyles. The bombastic Babe Ruth and the quiet and dignified Lou Gehrig. Ruth had been a delinquent youth sent to a catholic youth house, Gehrig, the son of German Immigrants was educated, having played baseball at Columbia University. Once Lou Gehrig, who was born on June 19, 1903, in New York, got in the lineup in 1925, he never came out, playing in a record 2,130 consecutive games.

Lou Gehrig was the “Pride of the Yankees” quiet in nature he was a blue-collar baseball player who enjoyed that Babe Ruth stole all the headlines. However, the two stars often quarreled as Ruth once made disparaging comments about Gehrig’s mother. One Babe Ruth retired; Lou Gehrig again was overshadowed as Joe DiMaggio became the new superstar upon signing in 1936. Gehrig won his second MVP in 1936 as DiMaggio helped forge a new dynasty. The Yankees became the first team to win three consecutive World Series as they entered 1939 looking for a fourth.

Lou Gehrig was one of the best pure hitters in baseball. His lifetime average was .340; he had 493 career home runs and 1,995 RBI. A late-season slump saw Gehrig finish the 1938 season with a .295 average, just second time in his career he failed to hit at least .313. When Spring Training began in 1939, Gehrig was feeling tired and lethargic. It was assumed as the season began that he would recover. However, a week into the season, it was clear that something was physically wrong with the Iron Horse.  Batting .143, with no home runs and one RBI, Gehrig asked out of the lineup on May 2nd, ending his 14-year streak.

As Lou Gehrig found himself getting weaker, he and his wife called the Mayo Clinic in Minnesota. Still traveling with the Yankees but not playing, Gehrig underwent a series of tests in June. The analysis confirmed the worst that Lou Gehrig had ALS (Amyotrophic Lateral Sclerosis). The rare disease attacks the nervous system, eventually weakening all muscles and leading to death.

After visiting the Mayo Clinic, Lou Gehrig announced his retirement and planed for a special day in his honor between games of a July 4th doubleheader against the Washington Senators. The Yankees brought back many of Gehrig’s former teammates, including Babe Ruth, who had finally buried the hatchet with Gehrig. The Yankees retired his #4; the first number ever retired in baseball. Asked to say a few words, Lou Gehrig facing death with dignity delivered the following speech.

"For the past two weeks, you have been reading about a bad break. Yet today I consider myself the luckiest man on the face of the earth. I have been in ballparks for seventeen years and have never received anything but kindness and encouragement from you fans.

“When you look around, wouldn’t you consider it a privilege to associate yourself with such a fine-looking men as they’re standing in uniform in this ballpark today? Sure, I'm lucky. Who wouldn't consider it an honor to have known Jacob Ruppert? Also, the builder of baseball's greatest empire, Ed Barrow? To have spent six years with that wonderful little fellow, Miller Huggins? Then to have spent the next nine years with that outstanding leader, that smart student of psychology, the best manager in baseball today, Joe McCarthy? Sure, I'm lucky.

"So I close in saying that I might have been given a bad break, but I’ve got an awful lot to live for. Thank you."

Amyotrophic Lateral Sclerosis would become commonly known as Lou Gehrig’s disease. The disease would claim Gehrig’s life on June 2, 1941. Not much is known about ALS today, as there has yet to be a cure. It was the disease that claimed the life of Pete Frates, who inspired thousands to get drenched with an ice bucket.

For more information and to raise some money, click the link for the Pete Frates Family Foundation.