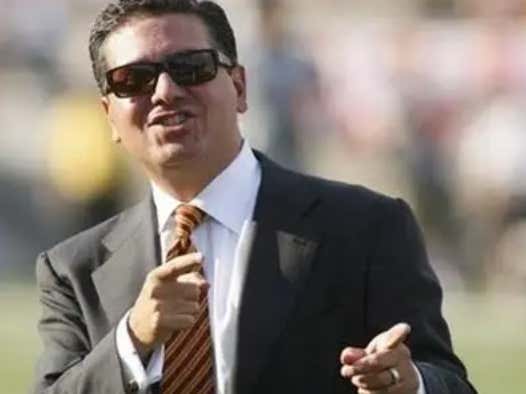 That's Daniel Snyder, commonly known to most as Lil Dan Dan. He is unequivocally one of my least favorite people alive. He has owned the Skins for two decades now and has turned them into the laughing stock of the league. Bad draft picks, bad free agent signings, a stadium whose field has more dirt than the old Raiders stadium, a history of treating employees like shit, and a repulsive product on the field for most of his ownership, and that's just the start of the list. Overall, he has been an F- owner of the Washington Redskins. And that's why this man should embrace the ever living hell out of this name change.

The Redskins have not been the Redskins since Dan bought the club and decided to run it his way, no matter what. Since he gainfully employed Vinny Cerrato and Bruce Allen for way, way, way, way, way too long. Since he made Jim Zorn an NFL head coach. The Albert Haynesworth deal. The Donovan McNabb debacle. We can go on and on. He took a once proud franchise and decimated it. Destroyed the fan base. Ruined football in DC.

But now he has a chance to change his legacy. Right now the Skins are in a good situation- we have an incredible young defense, a potential stud QB, a future hall of famer in Chase Young, a current hall of famer in Terry McLaurin, and a completely revamped coaching staff led by Ron Rivera. Things are looking good. So Dan should capitalize on this. A whole new rebrand of the team. A new era in DC. And that comes with him building a brand new stadium, his own Danny World. If he wanted to get nuts he could even change the colors to Red, White, and Blue, become the Washington Americans, and flex all over Jerry and the Cowboys. I think he'll stay burgundy and gold though for the tradition of it all.

Even the biggest "keep the name" folks can find a silver lining in changing it. Sure it took millions upon millions of potential advertising losses for this to happen, but change happens in various ways. So if Dan is being forced to change the name, he should at least embrace it and make the most of it. Rally everyone behind it. And he can finally get some of the positive publicity he's always craved. It's not all that bad. And at the end of the day, we're talking about a sports team's nickname. A new name will only increase his net worth. So he still wins.