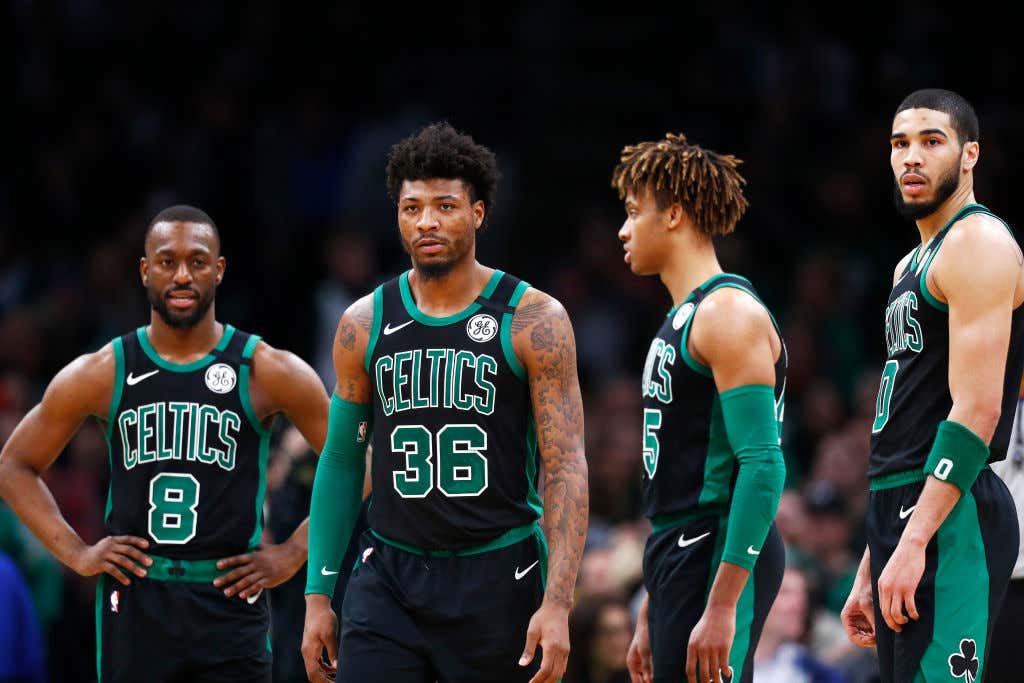 With today being the official start of both mandatory workouts and when rosters needed to be finalized with Orlando, I couldn't wait to hear the quotes that would come out from Brad & Co. It's the first time in forever this team has gotten together and while part of me understood that almost everything would be positive fluff, I could give two shits. This is the type of news/updates I need after being like 112 days in since the last time we saw this team play.

Well I'm happy to report that what we got was music to my goddamn ears. I'll warn you, if you're like me and are a fan of this team, you might need to contact a doctor around 4 hours after reading this blog. Let's hit it.

Huge news right off the bat. That doesn't mean something can't happen from now and when the team heads to Orlando, but it was a relief to see that everyone is negative. Smart obviously dealt with it, but knowing that everyone is 100% and can practice and get ready for Orlando is just what I wanted to hear.

Well would you look at that! So much for that whole "Jayson Tatum is considering opting out of Orlando because of his contract" bullshit. I smelled that from a mile away. No fucking chance Tatum was going to miss Orlando for contract reasons. Doesn't matter what happens in Orlando, Ainge is giving that man his max.

This was one of those situations where if someone was choosing to sit out, nobody should have had a problem with it. Doesn't matter if it was family, for social issues, health, whatever. But I'd be lying if I said I wasn't relieved that the full roster will be available. The Celts have as good a shot as any team in the East and I want to see them go at it with full strength.

I don't know about you, but I fist pumped so fucking hard reading that quote. Why? Well because Kemba's knee health is the biggest piece of this entire puzzle. If he doesn't have that same quickness and can't get by his defender off the dribble, the Celts are screwed. We all saw what post All Star break Kemba looked like. It wasn't great. If teams have to respect Kemba as a scorer then that opens up everything for Tatum. Teams can't over defend Tatum if the Celts have their elite scoring point guard back. For that to happen, Kemba's knee has to be right.

A big question was obviously how guys would look once they got back from the hiatus. Who would be in shape, who would be fat as shit, stuff like that. Brad had gone on record and said the Celts goal was that everyone should be a week away from being in game shape or something along those lines. Sounds like we don't have to worry about any of that which is a relief. To be honest though there was no way Brad was going to be 100% truthful there. He's not going to come out and say Player X was out of shape but I'm choosing to just ignore that.

I don't know what the hell that means but I know this team has grit in spades. I truly think whatever team can mentally lock in the best during this weird time will be the most successful. Who takes it seriously, who doesn't use this as a chance to party and get fucked up, all of that matters.

All in all, even if it was mostly lip service I don't really care. These quotes were exactly what I wanted to hear as we get closer and closer to the bubble. This team is healthy, this team is ready, and they are going to show up in Orlando ready to chase Banner 18.