Twitter has been around for 14 years, or 1/2 a Freddie Highmore if you'd rather, and it still manages to get at least one good abrupt exhale out of my nose a week. An application that gives me constant inspiration, fills me with unquenchable rage, and oftentimes fills me with concern that some peoples vote counts the exact same as mine. I, more than most, should be exceptionally thankful for Twitter though, as not only did it land me a job, but it also alienated me from people that can enjoy activities outside of the internet.

There have been a lot of great tweets over the years, from the president tweeting "covfefe", to thousands world class comedians making fun of what is most likely the most embarrassing thing the president has done. So many great tweets in fact, that it's nearly impossible to determine which is the best. So, after painstakingly reviewing comedy condensed to 250 characters, I created a bracket of the greatest tweets of all time, and will be pitting them head to head, until one champion remains standing. 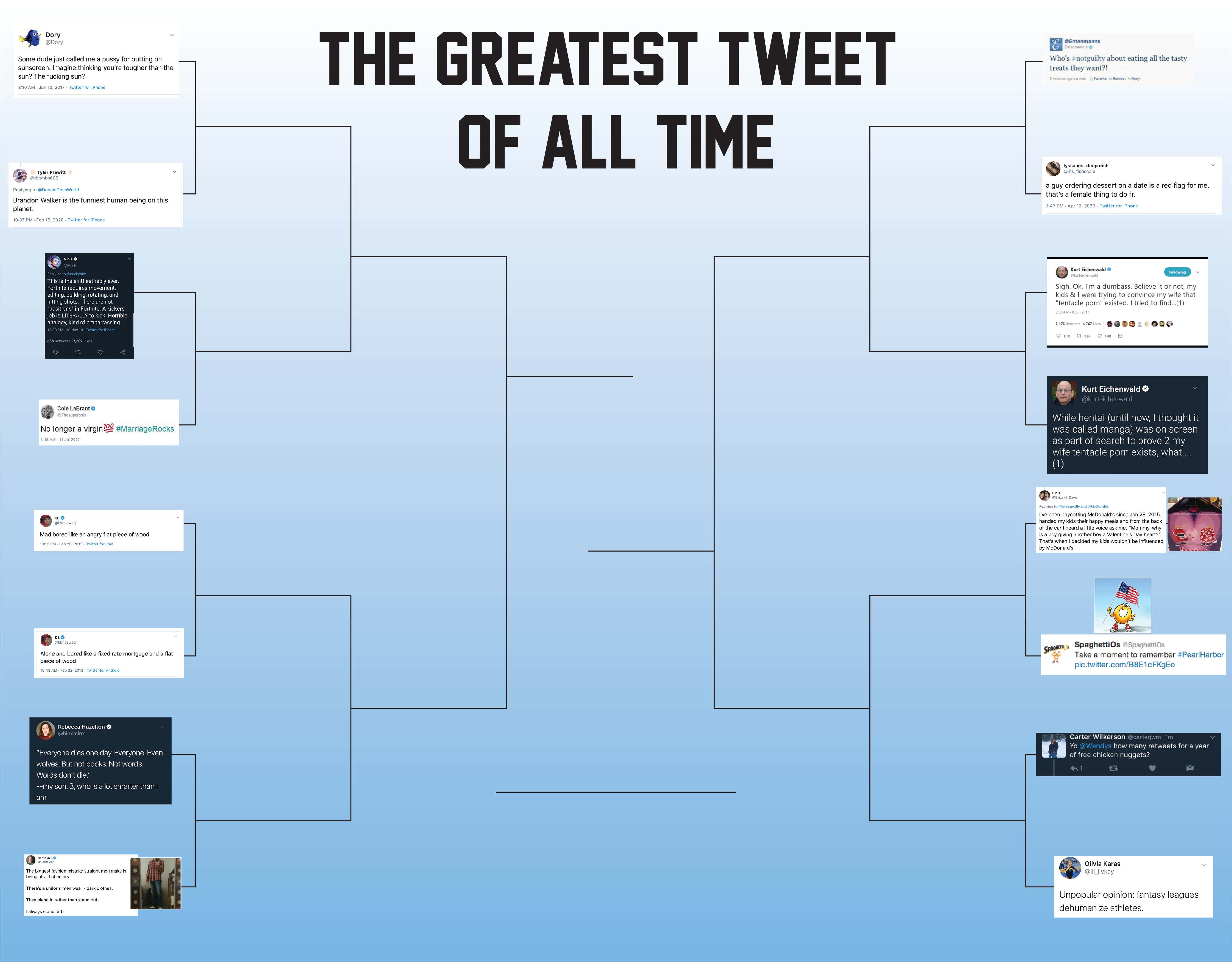 Below are the first round matchups. 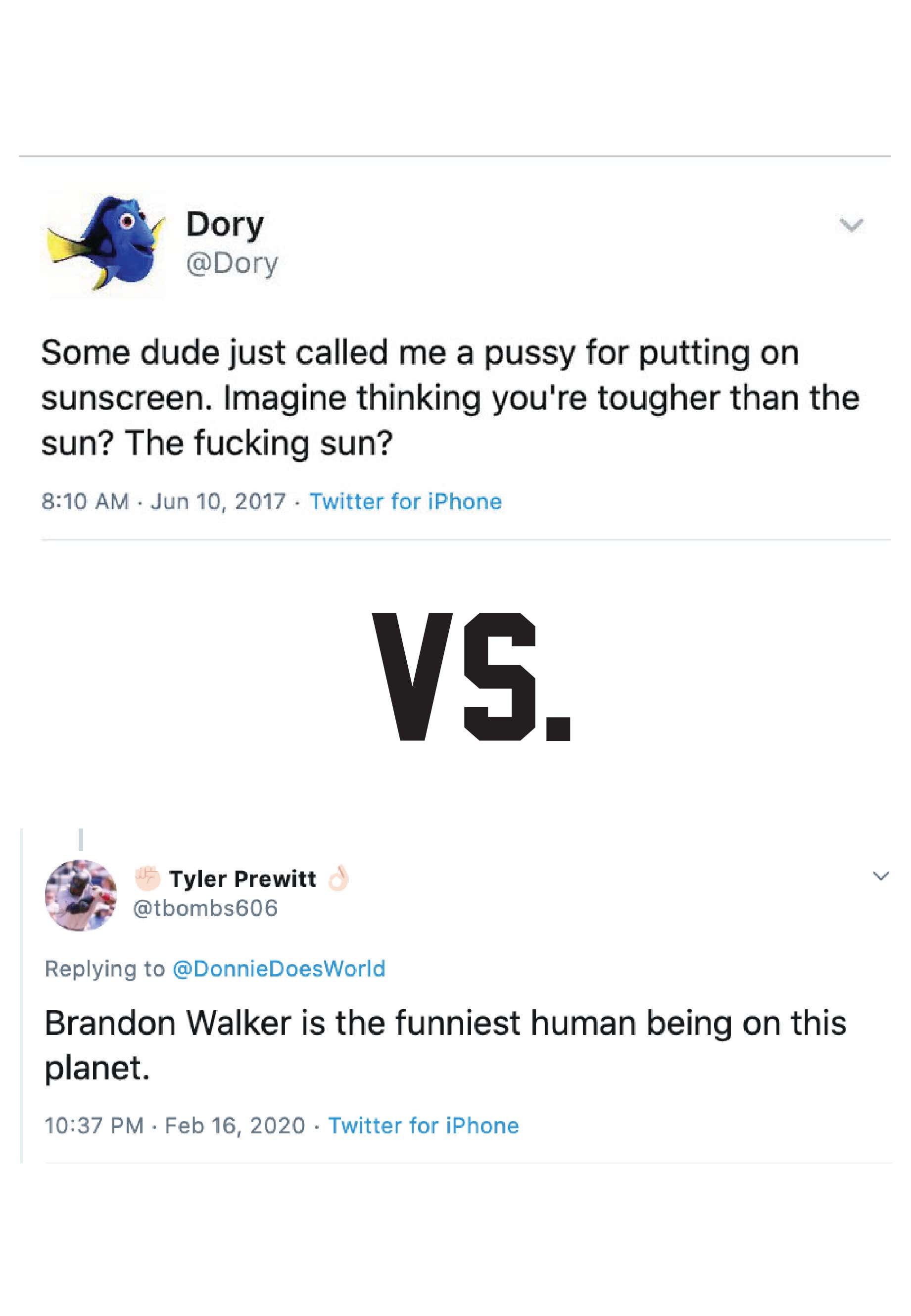 A real David of Goliath here, if David were a middle aged platinum blonde man hunched over a keyboard in his Mississippi basement and if David also lost. It's nothing personal, but just  impossible for Brandon to be the funniest person in the world, unless he is the comedic god behind the now suspended Dory Twitter account. 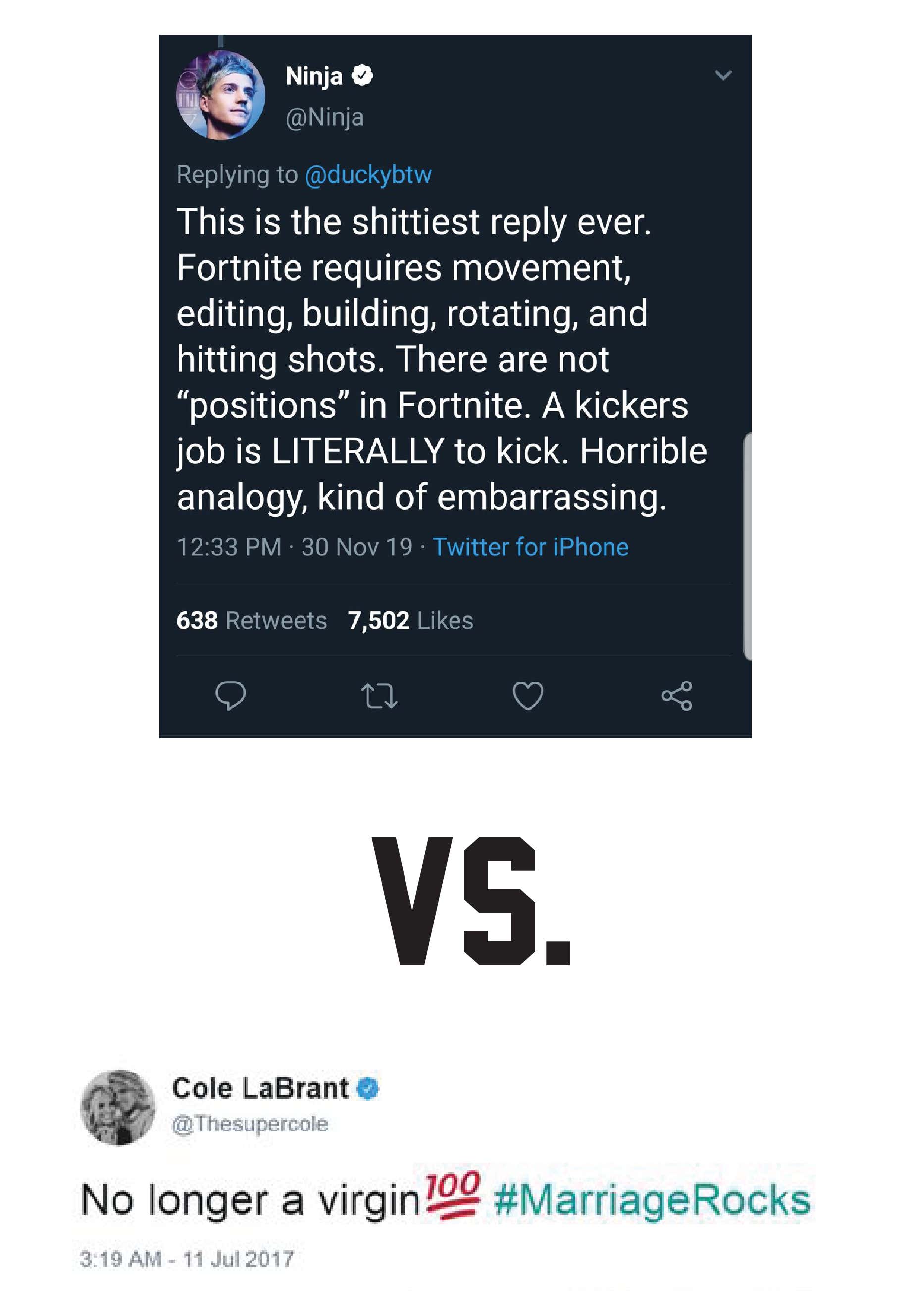 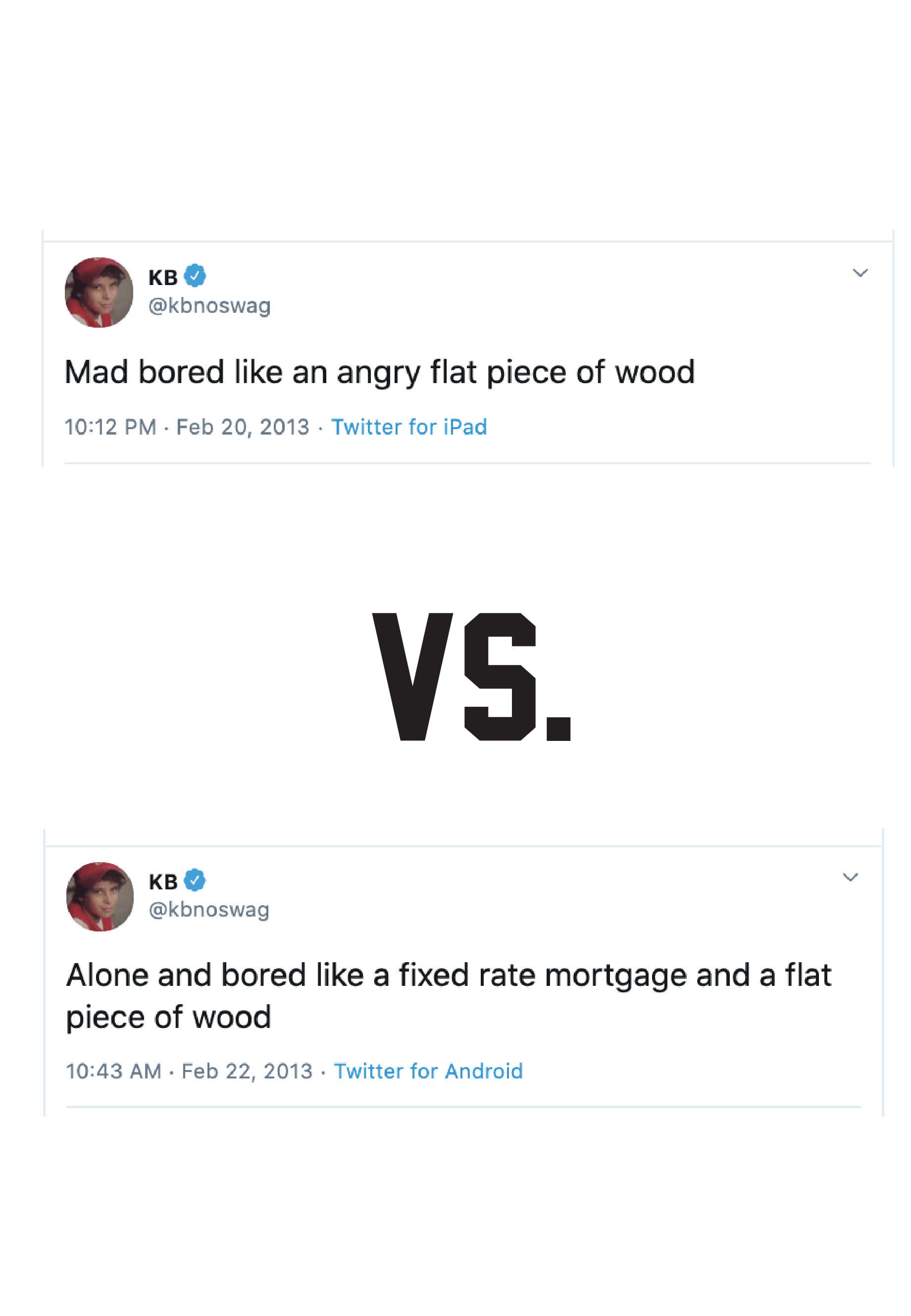 I hate bringing friends into the fold, for fear of being called bias. So I had zero reservations using my coworker Kyle. This matchup has 2 all timer tweets from 2013. One thing I ask you to look at before choosing, is the dates. Note that the first is the original, which should earn favor, but the second while a similar joke was excellently crafted two days later, and doubling the public interaction. Let this be testament to all aspiring comedians, if a joke doesn't work, sit on it for a day until it's a masterpiece. 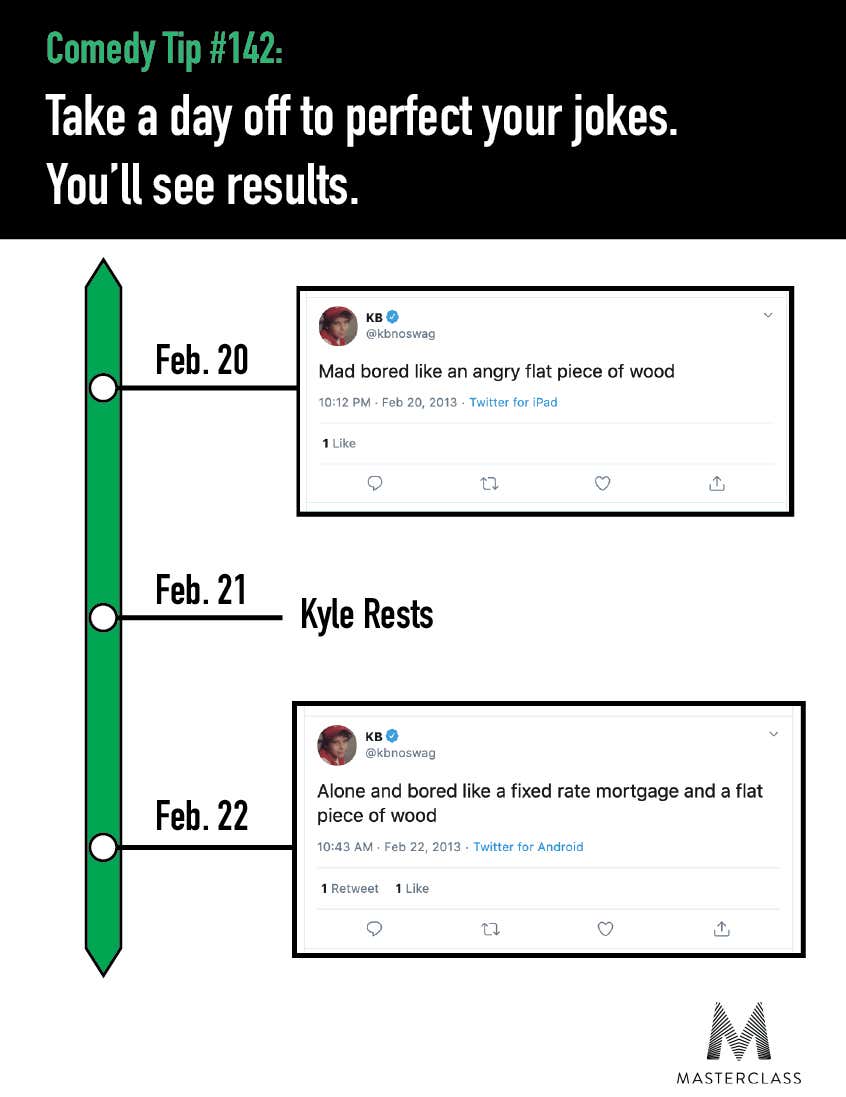 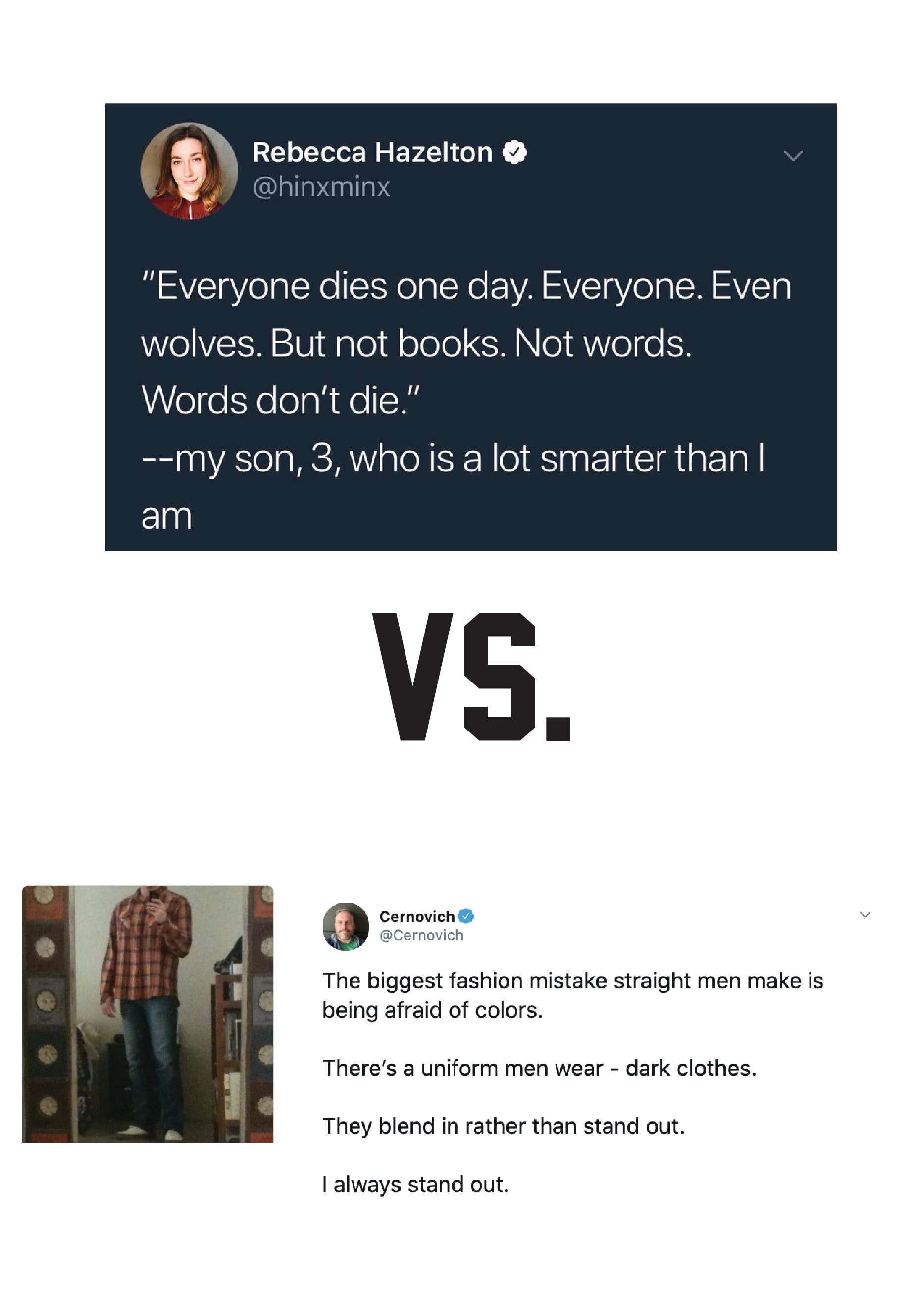 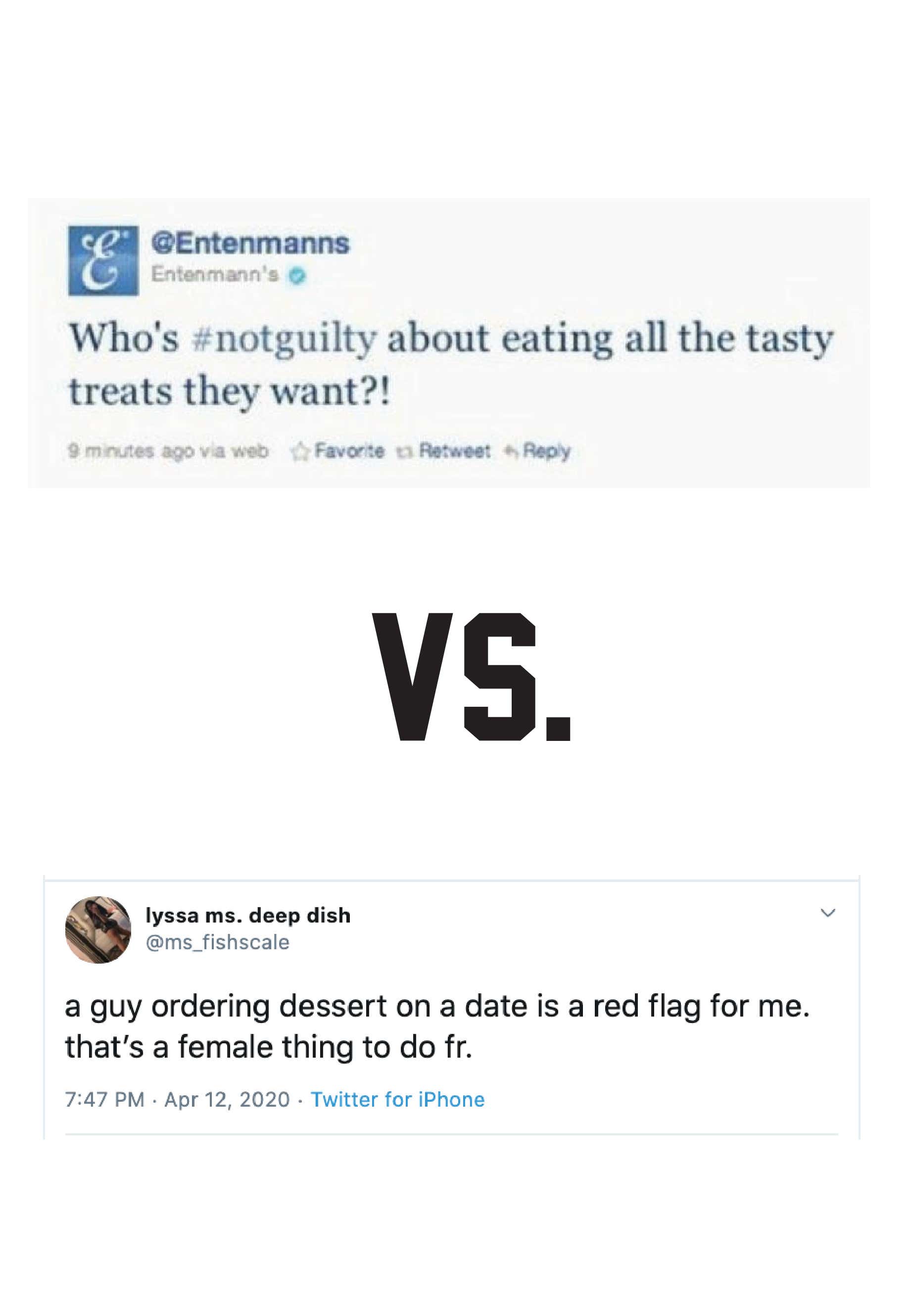 A tough early matchup. Entenmann's, everybody's third or fourth grocery store donuts come out with a fun, relatable tweet. Unfortunately they used the #notguilty hashtag on the very same day a specific two-first-named murderous mother was given that very verdict, tarnishing the desserts sweet message. Facing off against the dessert giant company is modern day Immanuel Kant, lyssa ms. deep dish. I personally want to thank ms. dish for giving me the tactic of sitting in The Cheescake Factory waiting to hear a man order the Lemoncello Cream Torte on a date, so I can immediately swoop in and fuck his girlfriend. 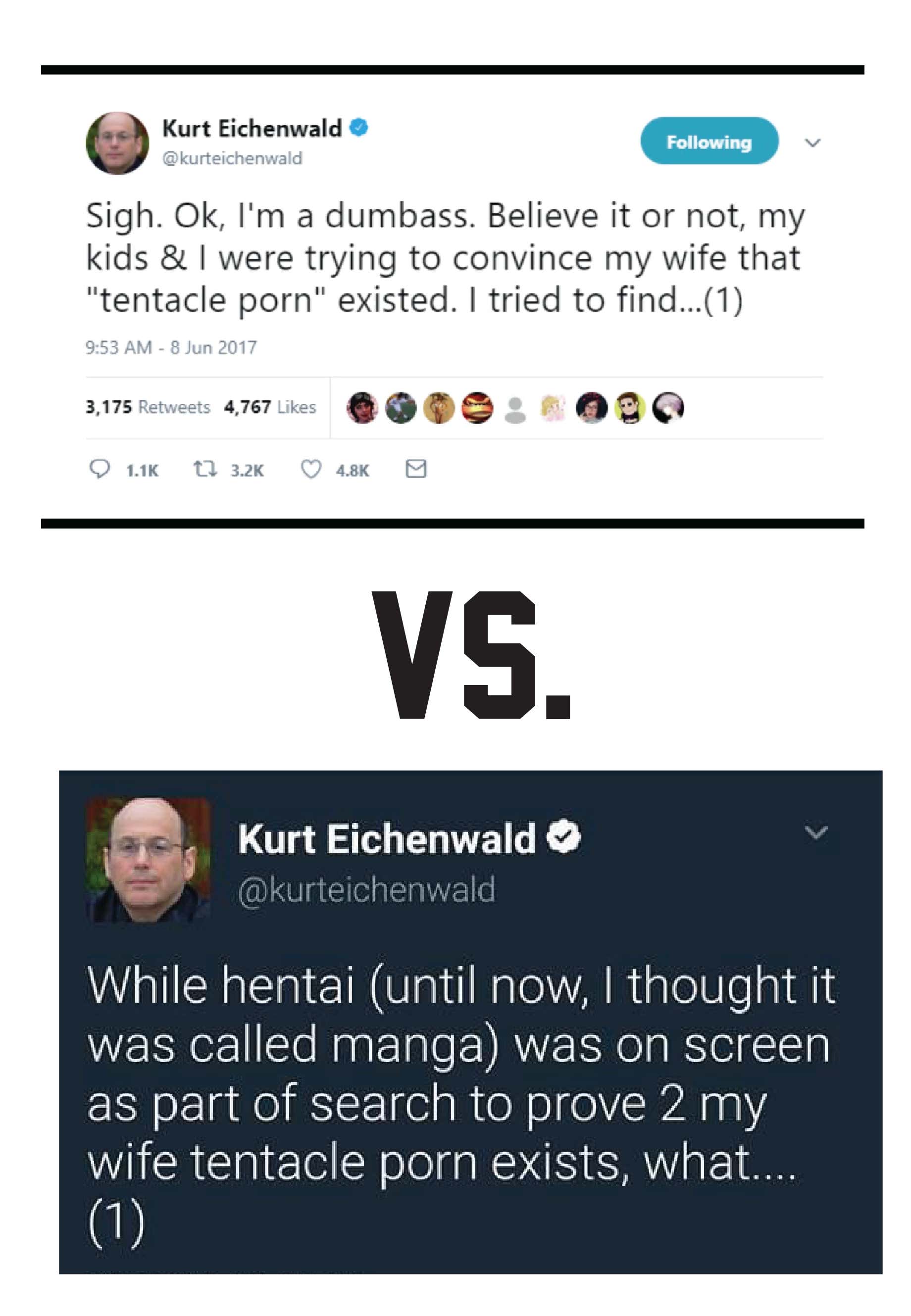 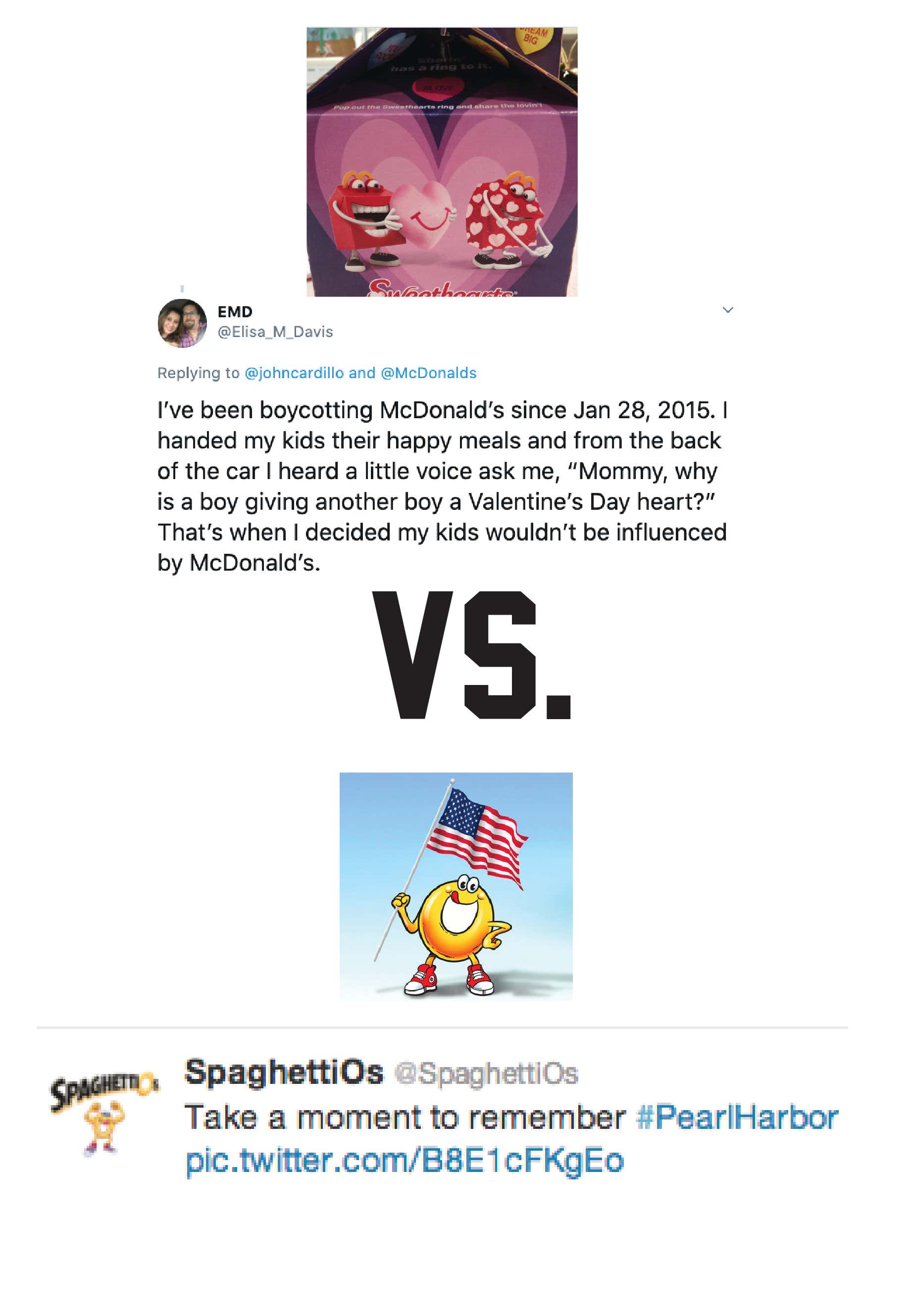 Every parent has to go through it. I remember when I was sixteen and asked my mom the difference between boys and girls, and was informed that "Well Nicholas, girls pee sitting down and boys look just like McDonald's Happy Meal boxes." This nightmare of a tweet is facing down the ever-patriotic Spaghetti O's. When it comes to being remind of national tragedy from canned Italian cuisine, I prefer to be told by Chef Boyardee. 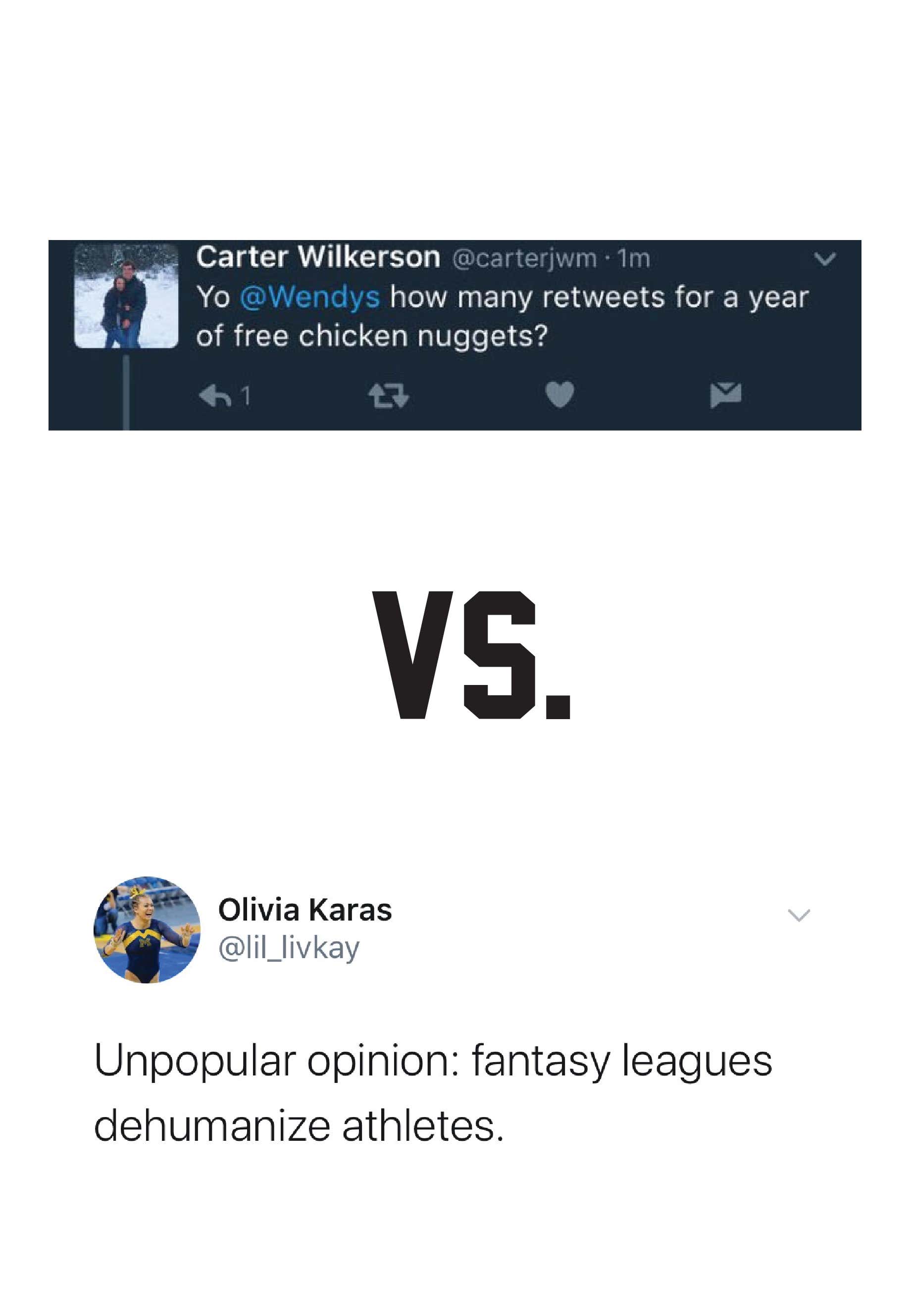 Finally we have two young up and comers. I truly believe Carter Wilkinson, the apt named Nuggs Kid, is the new representation of the American dream. A teen kid who's life year was changed altered a bit by getting free Wendy's chicken nuggets for a year. A total savings of around $325, so thats pretty damn cool. He is up against a tweet that has opened my eyes to the reality of the Twitter. It gives everybody a voice. Proving that there is actually zero good that comes from this app.