I had to ask this question after I blogged about "Wanna Be A Baller" the other day and blindly dubbed it the greatest one hit wonder in hip hop history because lets be honest, that song is as great as Lil' Troy's career is short.

However, I quickly realized that throwing out such a statement all willy nilly is a reckless thing to do as my mentions were flooded with strong competitors for the one hit throne. Who woulda thought that Twitter could actually have good opinions in the year 2020 of our Lord?

The first and most obviously answer I received was "Return Of The Mack" by Mark Morrison:

I always figured that The Mack had some sort of hit big enough to make his return worthy of such a tremendous song. However, based on the in-depth research I did on Mark Morrison*, it would appear he is very much a One Hit Wonder. So I guess the Return Of The Mack is almost like the Ignition Remix in that they are a Part 2 to something that doesn't even have a Part 1.

In the same ilk, I always figured Sir-Mix-A-Lot had at least one hit outside of "Baby Got Back":

However, based on his Wikipedia, it appears that was all Mr. Mix-A-Lot had in the hits department. Getting knighted and dubbed a Sir off of one hit is tough. But when that one hit goes double platinum and becomes the number 1 song, you can do it. I wish I could go back to 1992 and see how the outrage mob picketed a song about big asses.

*Thinks about it for a minute*

Okay, I'm sure those same people would be clutching their pearls in 2020.

Another obvious answer looking me right in the face was "Informer" by Snow.

To be fair, despite remembering when this video actually came out back in 1992, I still don't know an actual lyric from it other than A Leeky Boom Boom There, which I always imagined was some sort of Canadian slang for diarrhea. As my brain continues to disintegrate due to kids and old age, the amount of songs I remember will shrink quickly and songs I don't know the lyrics to will be the first to go (No offense to Snow, who I imagine is a swell guy).

Speaking of swell guys, Brandon Fucking Walker chimed in with a monster of a one hit wonder.

I don't think I am speaking out of line when I say Skee-Lo is probably on the Old School Hip Hop One Hit Wonder Mount Rushmore since this song fucking rules. That being said, Skee-Lo becoming famous for a one hit wonder about how short he is that has less than a 250,000 views while someone with a lyric video of his song has 1.5 million more views is very on brand for Skee-Lo. 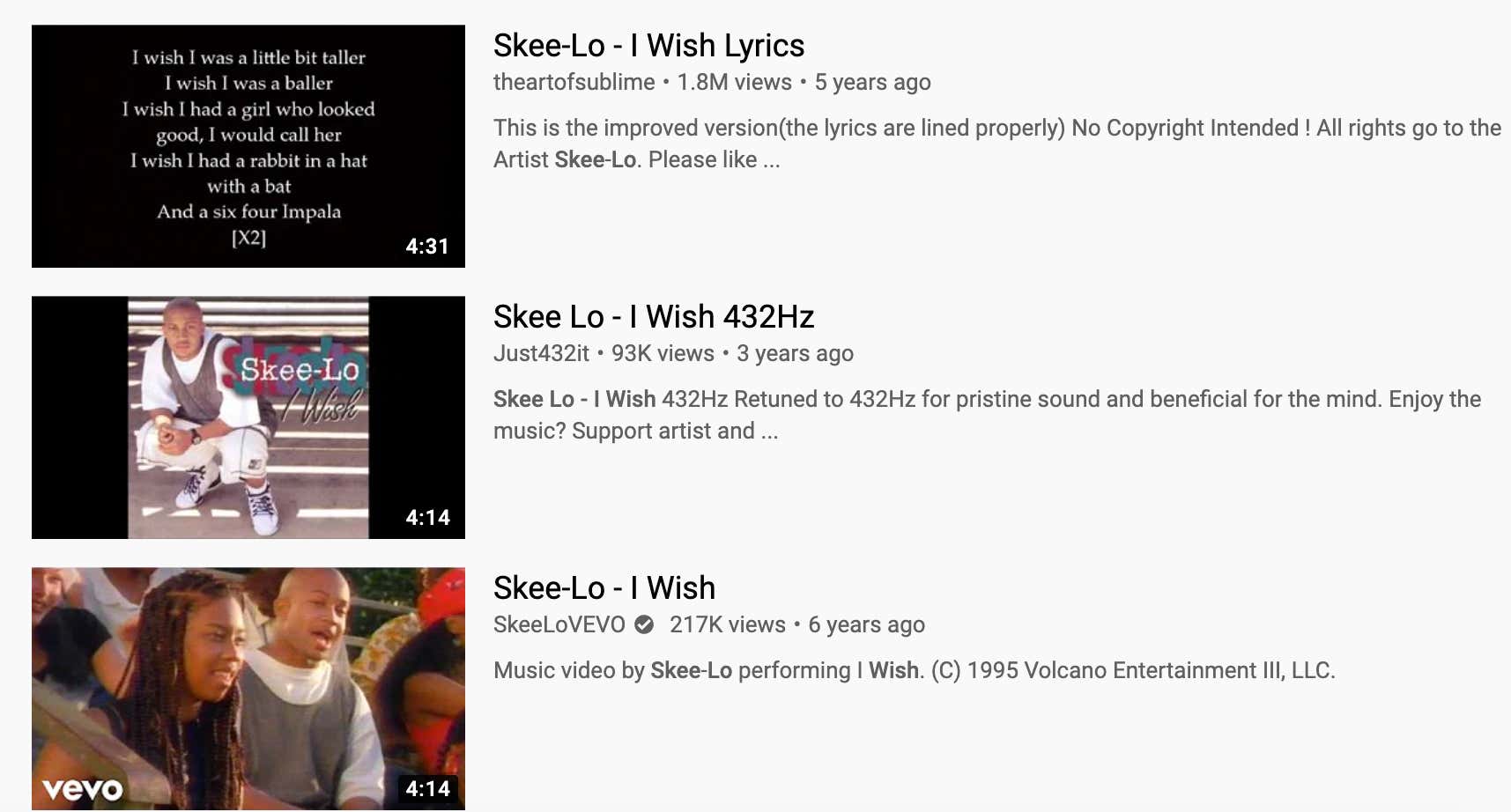 Speaking of guys who got a bad break, Ts & Ps for Craig Mack who got Wally Pipped as the face of Bad Boy by only the greatest rapper to ever live after "Flava In Ya Ear" came out.

While we are throwing it back, here were some other consistent answers that some people decided to #embracedebate about because of other songs they released or just general contributions to the music industry.

"Let Me Clear My Throat" by DJ Kool

"Just A Friend" by Biz Markie

"I Got Five On It" By Luniz

"Jump Around" by House of Pain

"It Takes Two" by Rob Base And DJ EZ Rock

Shout out Rob Base for performing at the same local sushi steakhouse lounge in a mall that I saw DMX play at last year.

Bringing it closer to the modern day, we had some early 2000s entries, such as "Tipsy" by J-Kwon

and maybe the most consistently nominated newer song, "Throw Some D's" by Rich Boy

Also Receiving Votes But Not One Hit Wonders included...

I honestly forgot about "I'm Back" and "Caramel", which both hold up until this day. I don't know which song of Petey Pablo's people forgot but both of those are fucking anthems to their respective areas (North Carolina and the bedroom) not to mention being on Ciara's "Goodies" long before Russell Wilson was.

We had lotsssssss of "Thong Song" by Sisqo chatter

However, people forget Sisqo was not only The Dragon but the head of Dru Hill that put out an absolute SMASH back in the day.

Along with a monster jam with DMX

We had a few people nominate Soulja Boy for "Crank Dat"

Lets go to Soulja Boy's reaction after being told he's a one hit wonder!

No offense to a pioneer like Soulja boy that changed the game, but the amount of #DISRE2PECT leveled on Chingy by saying "Right Thurr" was his one hit considering it may have been his third best hit is obscene.

Chingy's 2003 was like Peyton Hillis' 2010. I witnessed it come out of nowhere, know how great it was in the moment, and I'm still not sure how it all fell apart so quickly.

We had a lot of "Gangsta's Paradise" by Coolio

Which no doubt was a monster hit. But Coolio was already a big name when that song came out.

We had some Kriss Kross chatter for "Jump"

But as someone who had that album, I refuse to let "Warm It Up Chris" take that type of slander.

I also will not let "Whoa" by Black Rob

completely eclipse "I Dare You"

And of course, plenty of people nominated "Ice, Ice Baby" by Vanilla Ice

and the extremely original "Play That Funky Music"

Also to be clear, "Ice Ice Baby" sounds NOTHING like "Under Pressure"

I think that's the all of them. As usual, the Stoolies proved me wrong since I think I have to put "Return of the Mack" jussssst ahead of "Wanna Be A Baller" since it may be the actual best song of all-time let alone the best hip hop one hit wonder of all-time.