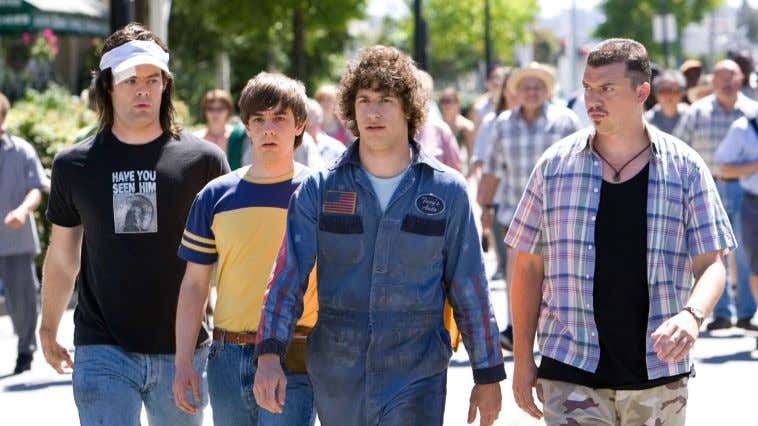 A thought popped into my head last night--when is the last time you saw a big ass stunt? I'm not talking about that dork Nick Wallenda walking across a tight rope where he has zero percent chance of dying. I'm talking about the fullest of sends that have ever been sent. A stunt so rad that the only two possible outcomes are either glory or death. Because as far as I recall, it's been years. And if there's one thing that the world truly needs right now, it's a big ass stunt.

Which then got me to thinking about how underrated the 2007 kick ass film Hot Rod was and still is to this very day. 13 years later and it still seems like the majority of the world is afraid to admit that it's a masterpiece artistically, emotionally, spiritually, and really the only way it wasn't a masterpiece was financially.

Just in terms of character development alone, this movie allows the viewer to see a piece of him or herself in each of the characters. The immediate bond the viewer has with the characters acts as the over-the-shoulder restraint latching down to take them on the rollercoaster of emotion throughout the rest of the film.

From the gang's pursuit to pull off the biggest stunt anybody on AM radio has ever heard, a ferocious battle between a grilled cheese sandwich and a taco, to Rod's relentless quest to beat the shit out of his step dad Frank, the movie takes you on a journey which has you leaving the film as a completely different human being than the one who originally sat down to watch it.

Andy Samberg, Bill Hader, Danny McBride, Jorma Taccone and Isla Fisher all combine to deliver a masterclass on what it takes to truly takes to be too legit to quit. And the fact that this isn't wildly regarded as one of the most influential films of our time? Well that's just unlegit.

But seriously. I've tried for 13 years now to find one scene in this movie that isn't great and I've failed every single time. So I guess I know what I'll be doing with the rest of my day. Time to dust off the ol' Blu-ray player and give it another watch. I'll see you guys in 88 minutes.