There are 2 very obvious explanations for this:

1. Osama bin Laden was a Leeds fan and they wanted to honor their most infamous fan ever

2. The person working in the cardboard cut out fans department doesn't read the paper

I know coronavirus has taken over the news and the planet. But failing to recognize the biggest cunt in the history of cunts AND giving him the best seat in the house is an awful look (I'm allowed to say the C word since I am saying it as an English soccer fan, which means it is 40% less offensive, and because its that cunt Osama bin Laden). I choose to believe Future PFT was the one who saw something and said something to the cardboard security guards. 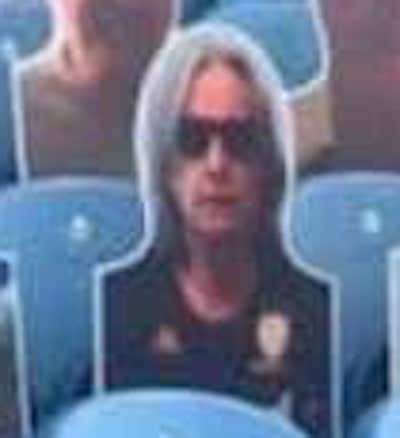 I am actually kinda surprised this is the first time I have heard of a team having to remove a cardboard cut out considering every league seems to be doing this while also being upset that bin Laden likely has everyone's censors on alert considering it appears the MLB will be doing this too.

Now me getting a cardboard cut out of my fat ass wearing a Fire Wilpon shirt just got that much harder. Thanks bin Laden!

To be honest, I can't believe we are even using cardboard cut outs in the year 2020 of our Lord. I get wanting to involve your fans in your games while they are stuck at home. But using cardboard seems so outdated and expensive. You gotta get a picture from someone, bring it to a Kinkos (or wherever the fuck you print cardboard cut outs), have employees actually place those cut outs in seats, then pray to God there is no rain. Major League Baseball owners just completely shit all over their league's image the last few months to save money.

Adding cardboard cut outs to the budget seems kinda silly when so many baseball fans probably have a Wii gathering dust somewhere in their house. Remember how much fun it was to make a Mii and then see it in the crowd of Wii Bowling or Mario Kart? Why doesn't MLB just do that instead of hoping nobody slips the face of evil through their censors? Just my 2 cents.

Suuuuuuuuper cripes for all the gooners out there! My beloved Chelsea would never allow that bloke bitch bin Laden into the stands of our beloved Stamford Bridge.

This is currently my favorite song in the universe