We've done, Jayson. We've talking about Jaylen. Well today represents another pretty important day in Celtics history. June 26, 2014 we saw Danny Ainge draft the heart and soul of this team. You may remember the 2013-14 season, the first under our lord and savior Brad Stevens. It was...not great. They went just 25-57, Jordan Crawford started 35 games and played 30 minutes a night, they relied on Jeff Green to be their #1 scoring option, their frontcourt was made up of two guys who were like 6'8 in Sullinger and Brandon Bass, the whole thing was gross. I'm talking the 26th ranked offense, 17th ranked defense, and 25th best net rating level of gross. What made it frustrating at the time was they were bad, but not bad enough to truly get to the top of the lottery. They had the 4th worst record in the league but how could we forget the Cavs somehow winning the lottery despite winning 33 games. The Celts were also jumped by the Jazz due to losing a coin toss, and it was more of the same when it came to their lottery luck.

Remeber, at the time people thought Wiggins was the next big thing, Embiid and Jabari Parker were studs, and it felt like the Celts were getting screwed. Here's how the lottery shook out 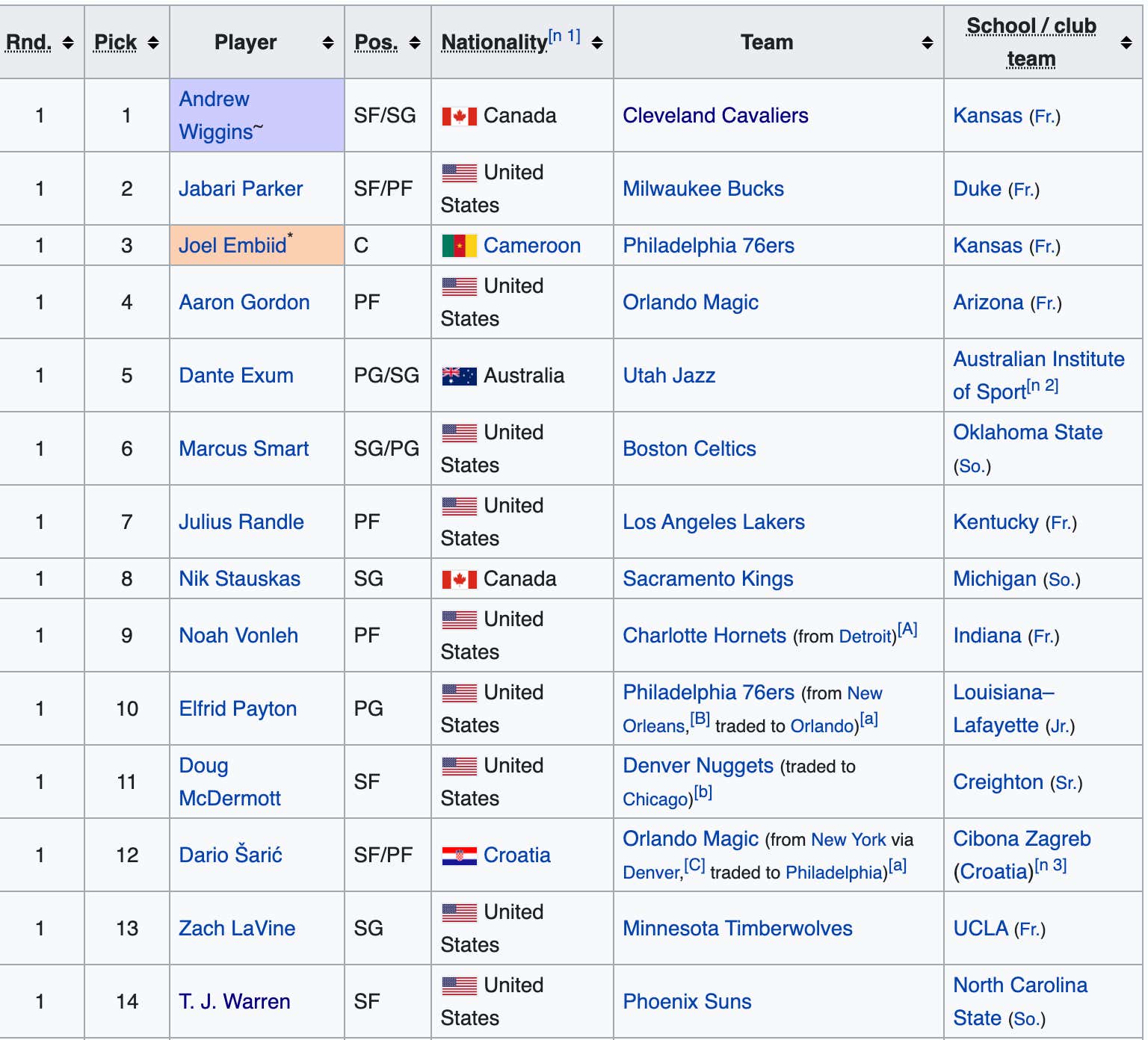 Outside of Embiid and maybe....MAYBE Aaron Gordon, is there anyone you would rather have on this Celtics roster? There was a lot pushback at the time over who Ainge passed over to take Smart, well I'm looking at the names for the remaining lottery picks and Smart is better than all of them. Even Julius Randle.

We all knew his shooting was suspect, but that's not why Ainge brought him in. My guess is he knew that Smart could one day turn into the ultimate glue guy and if there's one thing that almost every NBA champion has, it's a legit glue guy off the bench. Shit, the 2008 Celtics do not win the title without James Posey. Smart was this next era's Posey. Almost right away we saw that offensively he was still raw as hell, but the defense and intangibles were there from Day 1

In Smart's first season Ainge traded Rajon Rondo and Jeff Green. They were bad to start, I mean real bad, but then Isaiah came in and put the team on his back, carrying them into the playoffs. It was pretty clear the defensive duo of Avery and Smart made a difference, with the Celts defense jumping to 12th in the league.

By Smart's second season, his ascent into a cult hero was well underway. Everything that we love about Celtics basketball and hustle and heart he had in spades

Here's the thing though. The shooting was not getting better. In fact it was going the opposite direction to just 34/25% in that 2015-16 season. It was pretty clear he had no idea what the term "shot selection" was, and we were forced to deal with it because of all the other positives he brought. To his credit he was better in the playoffs that year with 12/4.5/3.0/1.7 averages on 36/34% splits with nearly 2.0 3PM a night, but it was another early exit.

Year 3 is when most lottery guys take some sort of leap. Smart did that in a sense, averaging a career high 10.6 points at the time. But once again, the shooting didn't get better. By now I imagine a lot of people were a little frustrated with the lack of improvement on that end, but again, on the defense end this man continued to be a goddamn monster

Not only that, he really started to develop as a passer

At this time, Isaiah was the offensive monster and Smart was his defensive counterpart. They won 53 games and went all the way to the ECF. Had Isaiah not been hurt, who knows what happens. Smart was a beast during that playoff run too

By now his role as a this team's 6th man (6th starter tbh) was pretty set in stone. I'd say after this season you weren't crazy if you just accepted that his shooting would never come around.

Then the team traded for Kyrie and brought in Gordon Hayward. They had drafted Tatum and had Jaylen ready to break out. We all know how what happened that year, but what we didn't see coming was Smart's best FG% since his rookie season. Sure it was still 36/30%, but there were signs that he was maybe coming around.

Later that summer Smart would re-sign for 5/40M and there were a lottttt of hot takes that Ainge overpaid. Looking back at that now all I can do is laugh. For what he gives you on a nightly basis and the importance he has to this team, that's was a steal.

Which brings us to the dogshit that was 2018-19. It was brutal pretty much everywhere you looked, but there was a silver lining. Smart could actually sort of shoot! In 80 games he threw up 42/36% splits with 1.6 3PM a night. That's respectable….for him! Not only that, but he made his first All NBA Defensive team which was long overdue, and at just 24 years old was blossoming to levels we didn't even know was possible

Which brings us to present day. Marcus Smart is without a doubt the heart and soul of this team and in my opinion their true leader. He's the longest tenured Celtic, will probably make another All Defensive team and might even get some DPOY votes. His shooting is still respectable, he's making 2.4 3PM a night and is averaging a career high 13.5 points a night. Looking back to his draft class, who of the guys taken ahead of him aren't even really in the league. We're at the point now with Smart where if he ever gets traded, this fanbase will riot.

When talking about Marcus Smart, the thing you'll hear most is he makes winning plays/impacts winning. Well here are the facts. Since he arrived in Boston they've gone from 25 to 40 wins, then 48, then 53, then 49, and at the time of the hiatus they were 43-21. It's not bullshit. This is the impact we all hoped for when we saw Smart walk across that stage in 2014. He's a player that can guard all five positions at an elite level, can be your primarily facilitator if needed, and will have random nights where he makes 11 threes out of nowhere.

Brad said it best when talking about Smart. He loves him and he trusts him. Something tells me he's not alone because nobody embodies what being a Celtic is like Marcus Smart. He embraced and loves this city and boy do we love him back.