Stocks are what's hot right now. "The market" as the big shots refer to it.

What better way to cross popular culture, finance, and sports than to compare NFL quarterbacks to publicly traded companies?

Came across this yesterday afternoon. Pretty well done and some of these gave me a chuckle. Some I thought could have been done better. Either way this took some decent insight by twitter user @harristbryson.

Starting off pretty simple enough. Good guy Russell Wilson that everybody loves as the darling cornerstone of every portfolio. Stevie Jobs' Apple. The stock that keeps on keeping on. Just like Russell. Quirky, eccentric, innovative, dependable, and the standard of quality in its industry.

This one I couldn't disagree with more. I think Lamar is poised to be more of an Alibaba or Bytedance. A true unicorn. Not some "fast-cas" chain restaurant that puts up decent numbers until it has it's quarterly salmonella or food poisoning outbreak, has to revaluate company policy, issue public apologies, then issue public promises, and begins the climb back into the black again.

And I say this as a Patriots fan who has enjoyed their team stomping all over the Ravens for the better part of the past 20 years.

Lamar Jackson scares the fuck out of me.

And even worse, he seems like a great human being. So he's next to impossible not to root for.

John Harbaugh does not deserve him.

Poor Eli. The body's not even cold yet and he's still getting dumped on.

I like Sam Darnold. I think he has the potential to be good/really good. But the Jets will inevitably find a way to stifle that potential and derail any chance at a successful career because the Jets.

Please get this man a GM. And a coach. Pretty much anybody to relieve Bill O'Brien of his duties.

And Uber, please get rid of this pretender - 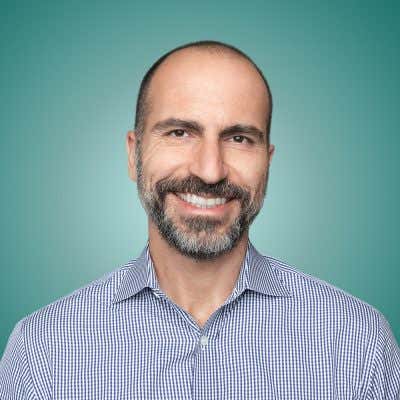 And more importantly, start showing some profits for the love of God.

Your p/e ratio is dogshit.

Lyft has at least gotten off the ground. And doesn't talk shit to Uber, Via, and the rest of the league like it's won a playoff game nevermind a championship.

Tough look for Andrew here. For a soul as innocent and pure as his to be compared with one of the most vile companies in American history is harsh.

Love this one. I've never drank the Kirk Cousins kool-aid. I guess because a thing called wins matters more to me than stats. But if you're a stats guy than Cousins still sucks.

Especially when Minnesota let 3 fairly comparable QB's walk out the door at half the price.

(Granted, Cousins did win a road playoff game last season which is no easy feat. So I can admit there's a possibility I'm wrong on the guy. We'll see how the next 2 years of his 3 year $96 Million (total) dollar deal pan out.

I fucking LOVE that the tide seems to be turning in the Aaron Rodgers public love fest that we've had to stomach for the last decade and a half.

This one's a bit too much.

Is Snap run by a CEO that loves to take very solid monster profits into the end of Q3 and then find a way to puke all over itself and dwindle those profits away before ultimately being in the red when the fiscal year ticks 0:00? Because the San Fransisco 49ers are.

Take it easy on Pretty Jimmy.

This one is also dead on.

Kyler Murray is another freak. At his size, and with how reckless he plays he shouldn't be good but somehow he is. Very very good.

Been a rough year+ for Ben. Can only wonder how much longer the board allows him to limp along before they put him out of his misery.

I hate it because it's so true.

p.p.s. - hottest shirts on The Street