On Monday, I told a story about how my apartment in Shanghai got absolutely trashed by this "Devil In a Dress"

Well people loved reading about my misfortune so much I thought I might as well do a part 2 as there have been some developments.

First off, a lot of people seem to think I got AirBnb catfished, and that this photo of an innocent looking airbrushed Chinese chick, couldn't possible be the one who left my apartment looking like a crack den. 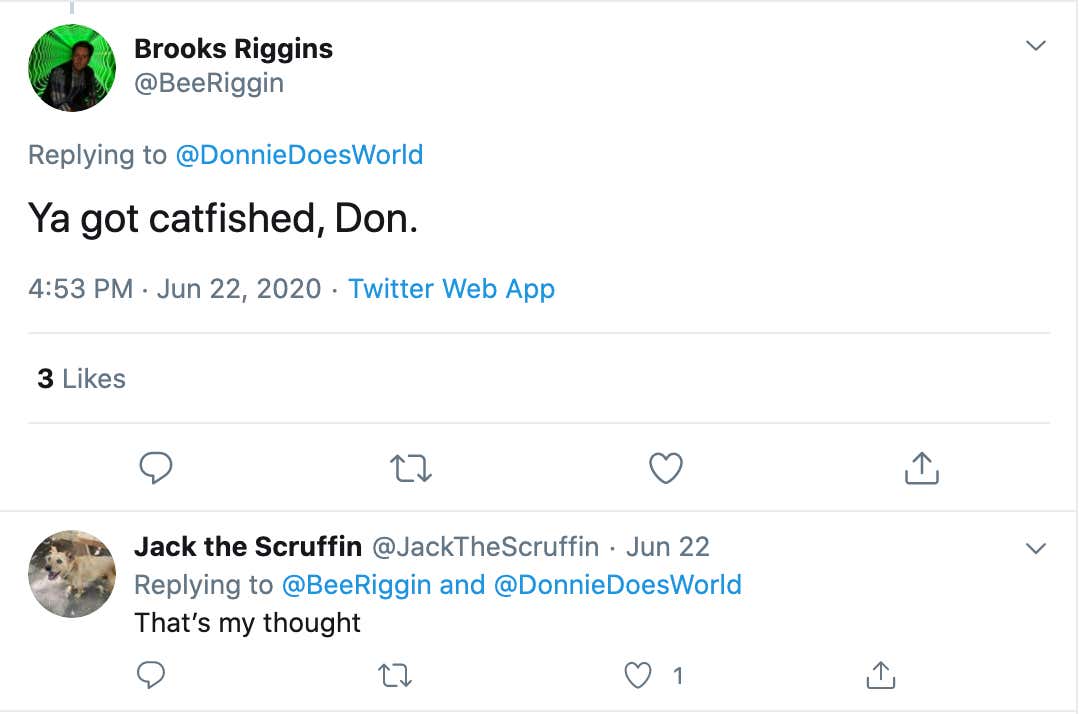 Well these people have clearly never been to China because the picture checks out (and was confirmed by my neighbors). You see in China they have something called "Little Emperor/Empress" syndrome. Over the past 30 years there is a class of people in China who have gotten INSANELY rich, and seeing as China had the one child policy, these new money millionaires ended up spoiling the shit out of their only children. Unsurprisingly, these little emperors and empresses don't always grow up grounded in reality, which can result in funny stories, like when this rich chinese kid I was tutoring started pissing in the corner of his room because he didn't want to learn english. Sometimes it results in absurd video clips, like this lady throwing cash in a sales assistant's face while screaming "You think I don't have the means to buy that? I could buy the entire street"

AND sometimes it results in tragedy, like the infamous "BMW Incident".

(THE GUARDIAN) This thoroughly modern Chinese tale of social inequality, dubious justice and appalling driving began innocuously one day last October when Liu Zhongxia, a peasant woman, and her husband Dai Yiquan were rattling through Harbin, in Heliongjiang province, in a tractor piled high with onions. In one of the many changes of direction prompted by oncoming cars, Mr Liu scratched the wing-mirror of a new BMW X5, prompting an altercation.

According to the local media, the driver of the BMW, Su Xiuwen, hit Mrs Liu with her purse and screamed: "How can you afford to scratch my car?"

The furious woman - the wife of a business tycoon - then got back in her car, slammed her foot on the accelerator and ran over Mrs Liu, killing her and injuring a dozen other bystanders.

So ya, not to judge a book by its cover but I get big time "Little Empress" vibes from the chick who trashed my apartment. It's the only explanation for why she didn't have the moral awareness to not leave half smoked cigarettes all over my floor. 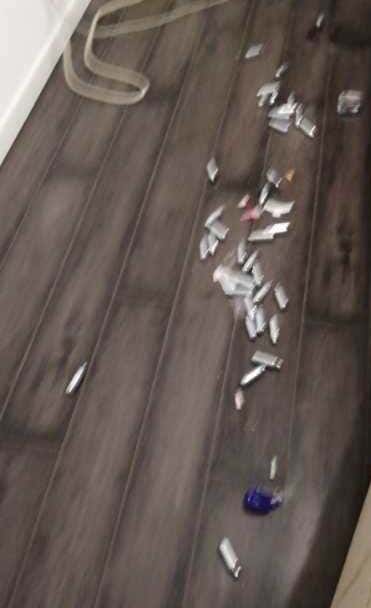 Anyways here is her heartfelt apology:

"It's not interesting" is such an incredible burn and the smiley face emoji is the cherry on top! She's just like "Ya I realize you're mad about me vandalizing your apartment but news flash, it's not interesting anymore so leave me be!" And I agree, this drama was becoming increasingly less interesting, especially because there's a good chance I never set foot in that apartment again, so I was just like "Listen, you threw a party at my apartment where you guys did drugs (whip-its) and ashed cigarettes all over the furniture, just pay for the two nights you stayed illegally and an extra cleaning fee and we're gucci". Well good thing I accused her of doing drugs as that led to things getting interesting again!

Ok guys false alarm. She wasn't doing whip-its, the nitrous oxide canisters left in my apartment were just for making soda water. I can't get mad at someone for wanting to enjoy a tall glass of DIY seltzer on a hot June day.  Now here is where my Ayi (aka my chinese cleaning lady/Mom) chirps in to let her know that she actually did throw a party in my apartment, and the neighbors have proof. 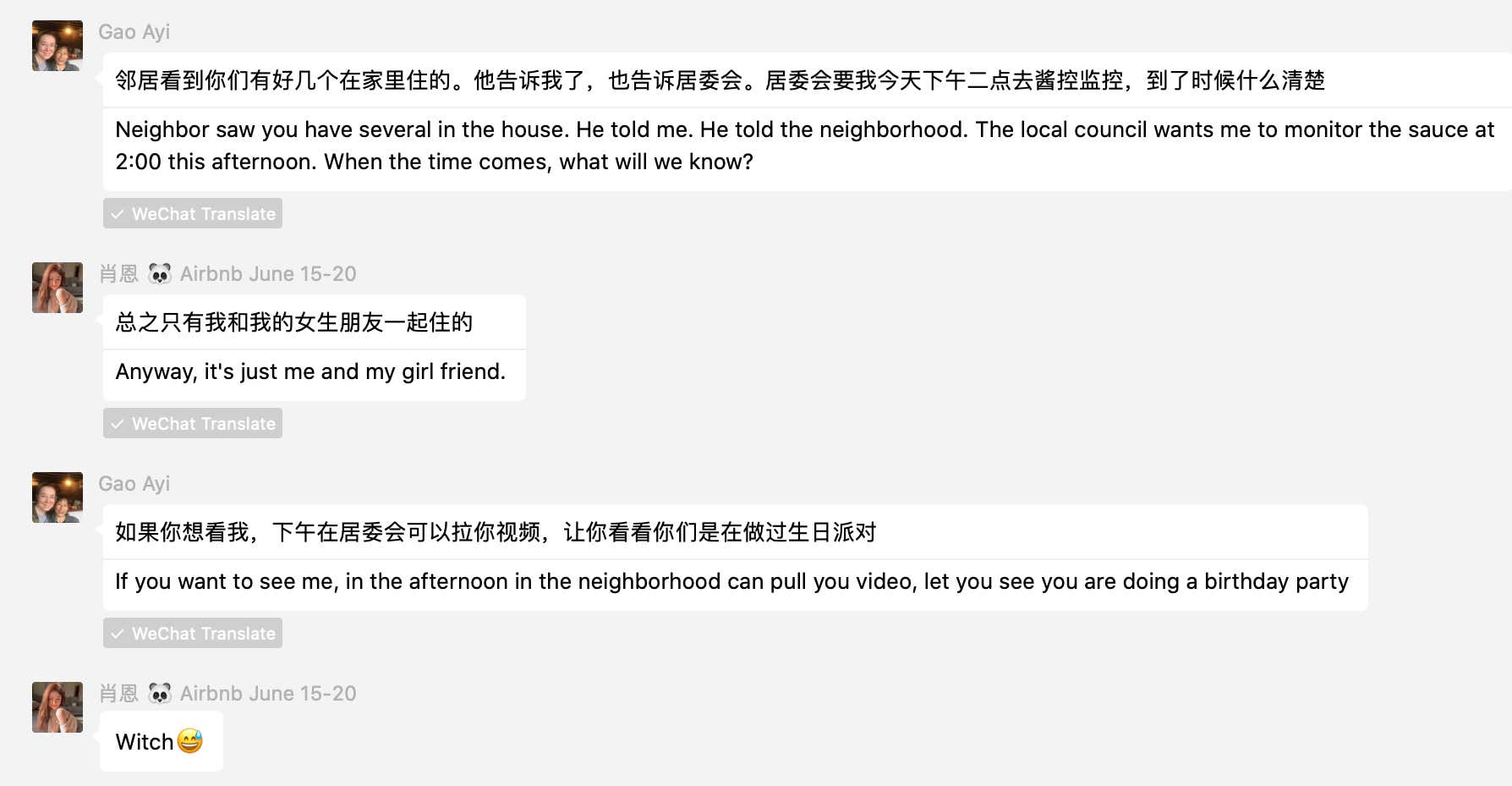 which prompted this devil bitch to start going absolutely BALLISTIC 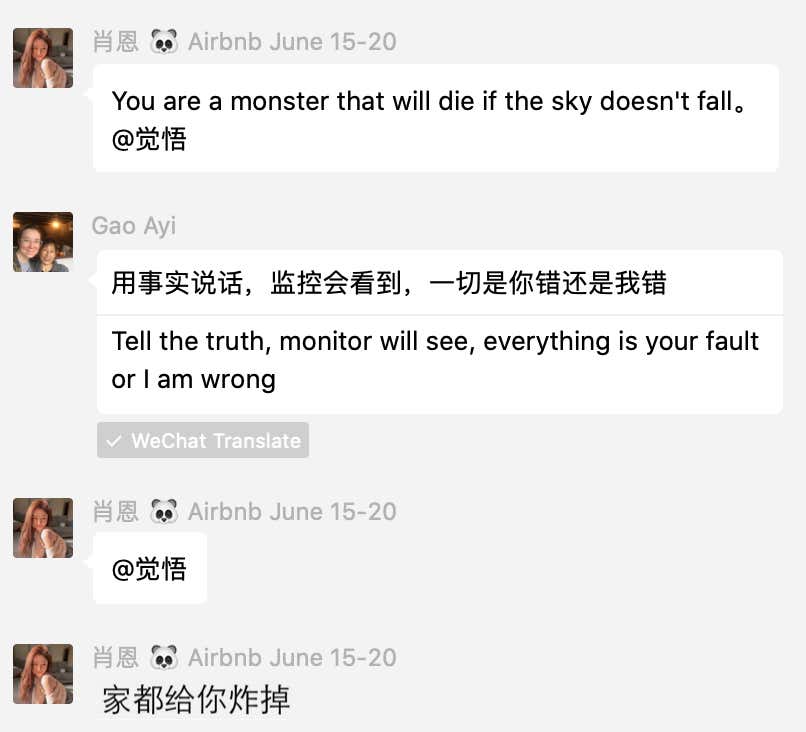 You'll notice that last line in Chinese ins't translated. That's because she sent it as a photo so I couldn't use the translate function on WeChat (the app we're using to communicate). Well I asked my friend if his Chinese girlfriend, Xi, could translate it for me and oh boy, this bitch really took it up a notch! 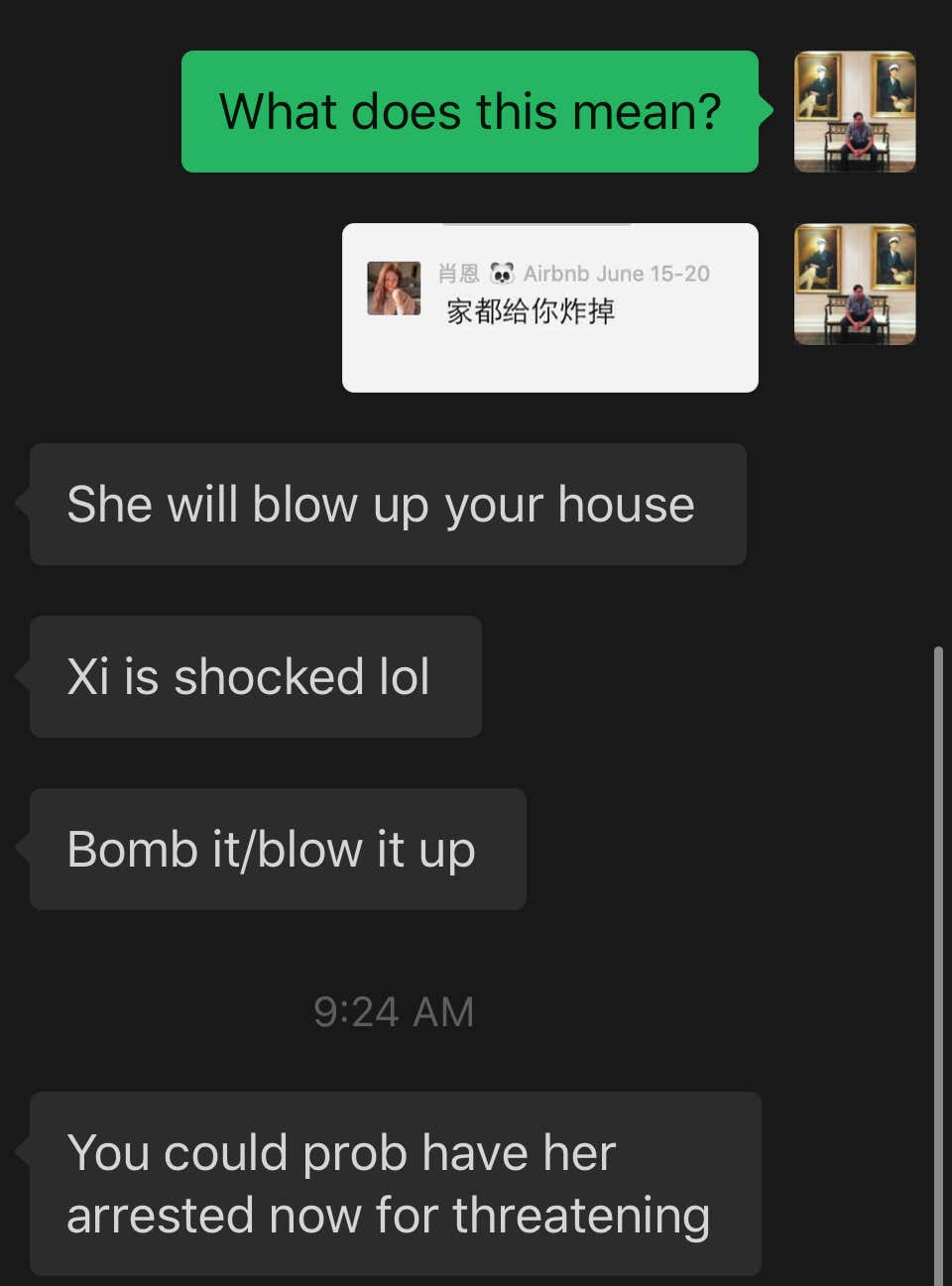 So let me get this straight. My AirBnB guest claims she didn't have a party in my apartment. My Ayi tells her that the neighbors have a video of the party. AirBnB guest threatens to bomb my apartment. Thank god I didn't let the moral police on twitter bully me into deleting my tweet calling her a WHORE.

Because that's what she is. A HOOOOAAAAHH. 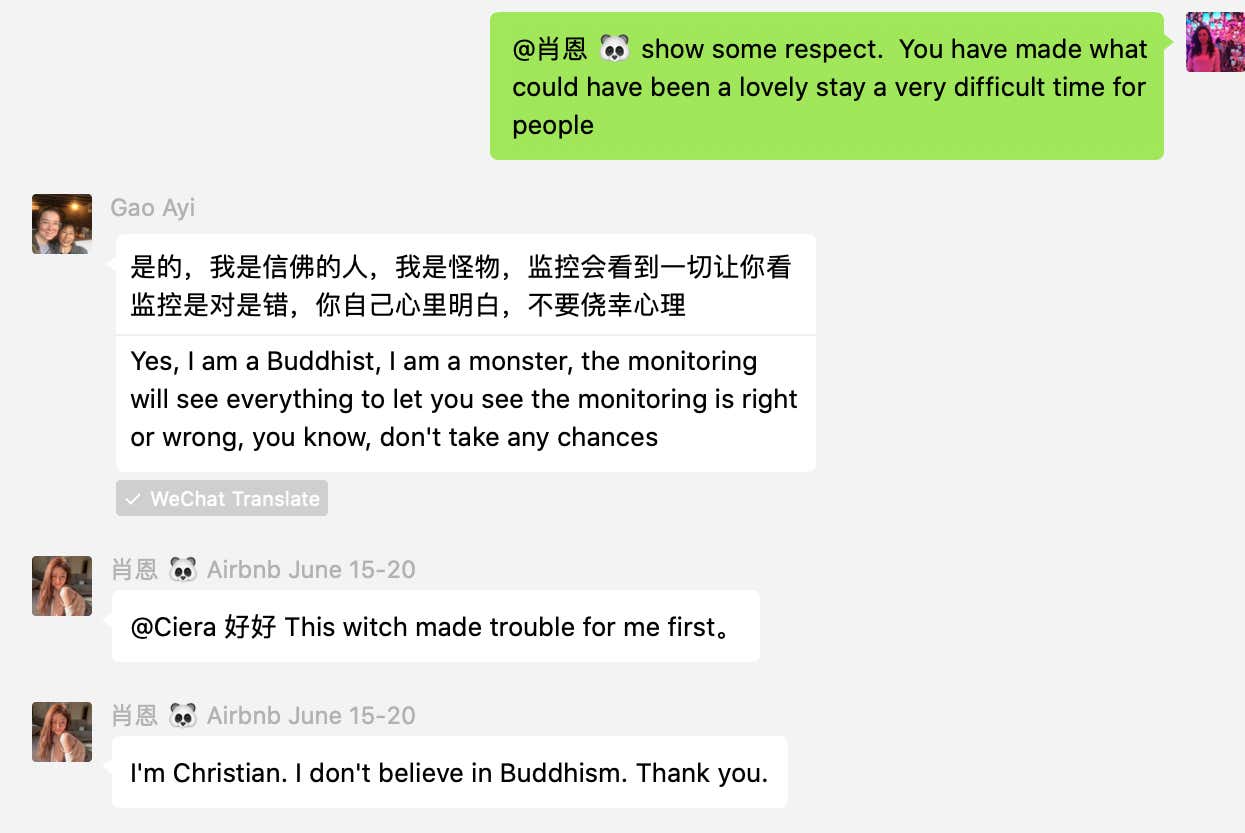 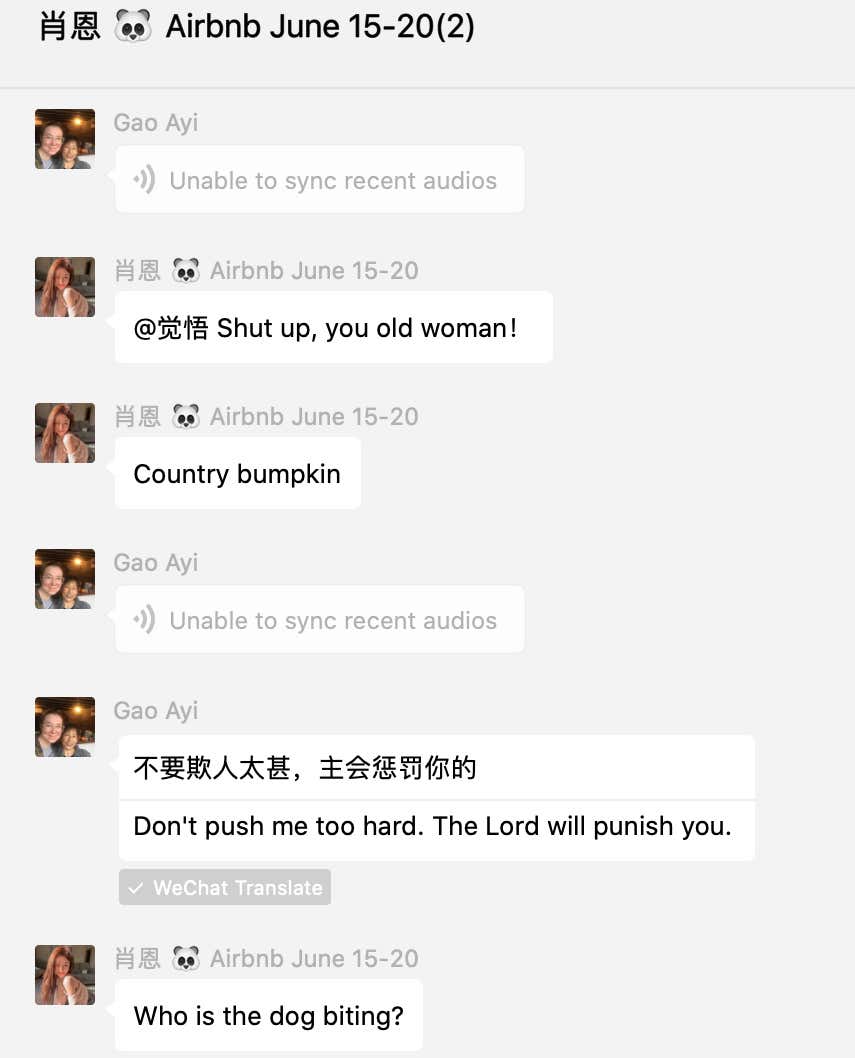 I have no idea what's going on here so don't ask me what "who is the dog biting" means (I think she is asking us to "control our dog" and by dog she means our Ayi). All I know is this whore called my absolute saint of an Ayi a "country bumpkin" and my Ayi called out her fake Christian bullshit with an absolute ZINGER!

And guess what whore!? My Ayi is a country bumpkin, and PROUD OF IT! She even took me to her hometown in the Chinese countryside once and I had the time of my life.

Just know that if the Christian god is real, my Buddhist cleaning lady will still end up in heaven tending to a flock of majestic goats while you rot in hell like the demon you are.

Here is where I let people know that all this drama is just over us asking her to pay $150 (for the two nights she stayed at our place illegally and a small cleaning fee for leaving our apartment in shambles.) We still haven't received a dime so I guess it's in god's (and AirBnB's) hands now. Thanks for reading, even though it's not interesting (smiley face emoji).