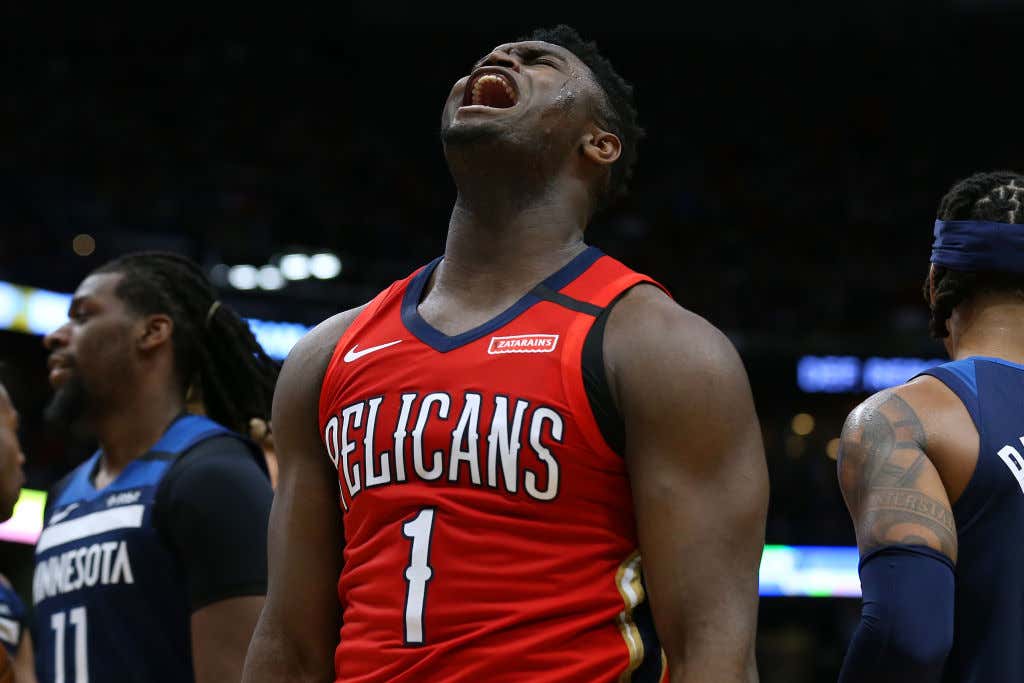 As we know, the NBA did all they could to come up with some sort of plan that ensured Zion Williamson would have every chance to carry his team into the postseason. If you don't think the league wants a Zion vs LeBron first round matchup I don't know what planet you're living on. Would it shock anyone if the Pelicans got into that play in with the Grizzlies and we saw some 2002 Kings/Lakers type officiating to give the Pels the edge? That whole scenario screams some David Stern-esq shenanigans.

It's also true that one of the big questions surrounding the Pelicans is what type of shape Zion is going to be in once things start back up again. He's not exactly the most in shape player we've ever seen even when the league was playing, but I have to admit the quotes coming out of New Orleans have me a little excited

"Zion has been diligent about taking care of himself," said David Griffin, the Pelicans' executive vice president of basketball operations. "He's in a good space physically and mentally."

"He's going to shock some people," the source said.

I would say this is just your usual positive propaganda, but given all the thiccccccc players we've seen trim down during quarantine I'm willing to give Zion the benefit of the doubt. Basketball Reference has Zion listed at 285 pounds which still breaks my brain, but what if he comes back and is like 270? That might not seem like a lot, but with someone who has injury concerns I don't think you an deny his weight could be a potential problem. If he's coming back in the type of shape that's "going to shock people", well I am very very interested in seeing what that player looks like.

Remember, this was Zion before the hiatus

Given the tighter schedule that we'll see in Orlando and how important Zion is to the Pelicans potential success, a new and improved in shape Zion has to be factored into their chances. In his 19 games Zion averaged just under 30 minutes a night and chances are they are going to need him to be on the floor for longer stretches in Orlando. You look at his on/off splits and yeah, it's pretty ridiculous

so I don't know about you but I cannot wait to see this new version of Zion that apparently exists. It's hard to imagine a more dominant version but now that he should be 100% healthy and is in great shape I suppose anything is possible