At the beginning of my career in sports broadcasting, I sought out the advice and wisdom of decision-makers and talent evaluators in the industry. I spent hours making spreadsheets, finding email addresses and phone numbers of the head people in the video departments of Fox Sports Regional, ESPN, Spectrum, Big 10 Network, etc. etc. and made cold calls just to get a little guidance, a little encouragement to keep going, keep pursuing this unlikely, low probability career path.

You see, I didn't go to school for journalism or media or even communications. Everything I did and put on tape was based around my own instincts, and the result was someone raw, more non-traditional and different than the talking heads on TV. When I spoke to these "talent evaluators", it was deflating. My unorthodox style was not helping my chances of getting a job in this field. I was told, I'd never be good enough, charismatic enough, or smooth enough to compete to perform at that level.

One conversation with Mark Hulsey, Executive producer for Big 10 Network, is burned in my brain like a white-hot branding iron of negative criticism. He asked me about my long term goals and so I vulnerably shared with him that I'd like to host an entertainment show like Good Morning America and something sports-related like Sportsnation (I know this was a while ago, don't judge me). He scoffed and flatly said "you're not nearly as charming or charismatic as x,y,z host so you should get that goal out of your head."

From then on, it was "let me show this fucker Mark Hulsey what's up." And with every opportunity that comes my way, I think of him and all of the people like him who wanted to squash a seed of a goal before it even had the chance to grow.

Because of this, I really root for underdogs and having a seething distaste for so called "talent evaluators." My favorite thing to see is when "talent evaluators", aka "scouts," aka bloggers who get paid to give their opinions on NFL prospects, get proven wrong RIGHT AWAY.

This happened with All-Pro Left Tackle David Bakhtiari of the Green Bay Packers. Pre-draft, he was underrated, overlooked and seen as not having the footwork or fluidity to even stay in his position. This is what talent evaluators thought about him pre-draft.

More shade was when the Green Bay Packers gave him the #69, which is usually reserved for players they don't think that highly of.

David talked about this exact thing with me this week and also referenced it on the latest episode of Bussin' With The Boys:

I mean, it's funny when you bring it up. Usually, I mean, most people that do play football, you give that number to someone that's probably not going to be on the football team or the long snapper. So when I found out that I had number 69,  it was like "damn that's really what they think of me. We'll see how long I last. My brother was in the league and got cut 13 times. I went in with a definite warning with a pessimistic view and like literally took like if you mess up one time, you're gone type stuff, because that's literally my brother's life."

But with a twist of fate and as life would have it, David got the chance to prove himself much earlier than expected when starting Left Tackle Brian Bulaga tore his ACL prior to the start of the season.

"The opportunity came quicker than I thought and I'm either going to be a starter or I'm going to be shit. So let's figure it out"

The result was that he was in fact, NOT shit. He was THE shit. He became the first rookie to start at Left Tackle for all 16 games since the NFL went to a 16 game schedule in 1978. And Bulaga never got his job back.

As he continued to progress through his career, and he became first team All-Pro, David, like me, remembered that trash talent evaluator from some Colorado blog site. And he tweeted it out to show the world in my opinion that yo "I remember every word of what was said about me" and will continue proving you guys wrong.

Write your own narrative.

Seeing this tweet after he made All-Pro, made me happy. He firmly remembered what that "scout" said and used it as fuel.

Sometimes there's a lag between reality and perception.

But, you just keep grinding.

Yesterday, CBS put David firmly at the top of their offensive lineman rankings. #1 at his position. In the ENTIRE fucking NFL. 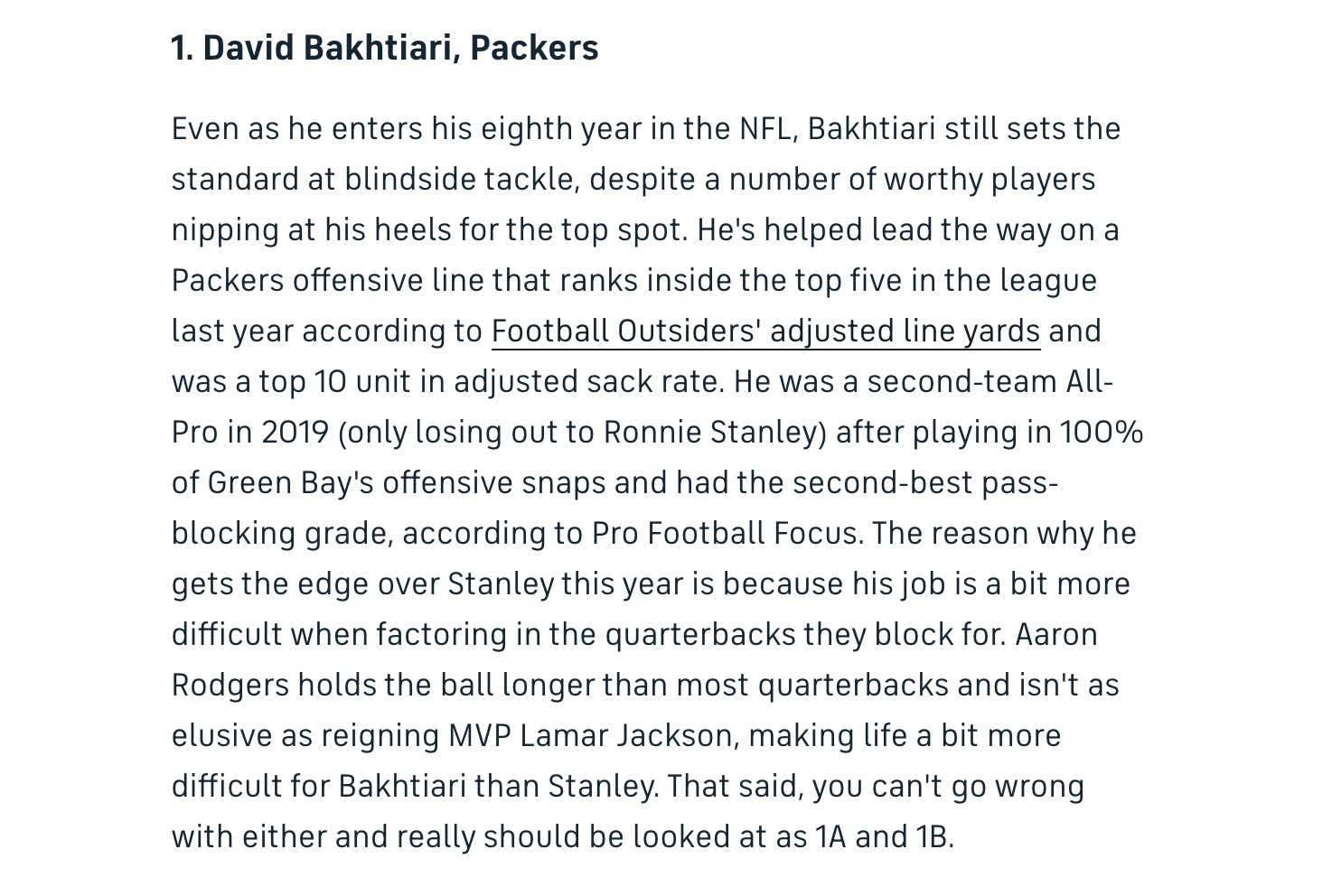 On the heels of this new ranking, I asked David about that one "talent evaluator" and his pessimistic view of his abilities pre-draft.

"Yeah. I think the only thing that's like truthful is the cutting. I can definitely admit I'm not a good cutter. I don't think I think at this point your career, you know what you're and you know what you're not me and cutting aren't good friends. We definitely had our trials and tribulations. But I mean, they're kind of abolishing cutting anyways in the league so it kind of works in my favor. "

"But I really enjoy when people tell me what I can't do. So then when I can prove to them that I can do it, it's kind of just like the ultimate like, fuck you."

David's journey I think is meaningful for anyone trying to accomplish something wildly difficult and even improbable. If someone had told you a 2 star recruit entering college would be the consensus best at his position before age 30, would you have believed them? Probably not. Here's the thing. David was NEVER a 2-star recruit. He was a stud and proved it every chance he had.

People in the industry, friends, even family, will be not just skeptical, but dismissive of your talent, work ethic, and the potential for success. People will shit talk your skills and abilities and attempt to stop you on the journey.

The truth is, most people have very little clue what someone has the potential to be. Even greats like John Elway consistently whiff at evaluating who might be the next franchise quarterback for the Broncos. The great Michael Jordan struggles to identify who will be a game-changer. The trick is to block out the noise and just stay in the game.

One thing I can confirm. David Bakhtiari isn't just the best player at his position in the NFL, he's a funny and smart dude who loves playing Settlers of Catan and never gave up that #69 (nice) jersey.

The entire interview on Bussin' With The Boys is worth a listen. Click below for the full episode