Ah would you look at that? Looks like positive vibes and miracle water couldn't stop the great Novaxx Djokovic from catching coronavirus after his middle finger to the global pandemic tennis tournament the past few weeks. Now listen, I'm not evil, I wasn't rooting for this to happen. I'm in the least bit shocked, but I hope Novak and his wife Jelena make a speedy recovery and learn from this. That being said, WHAT A FUCKING IDIOT!

It's truly hard to grasp the incompetence and ignorance this asshole has shown over the last few months, which all came to a head this past weekend. Dude held his own tennis tournament in back to back weekends with zero coronavirus social distancing precautions, full capacity fans, no masks, players flown in from different countries, and of course partying at the clubs after! Global pandemic? Where? Never heard of it.

Oh then a top 20 player named Grigor Dimitrov tested positive and forced the cancellation of the rest of the tournament. The guy who was breathing down Novak's neck during a game of basketball in between matches. The guy he was hanging with 24/7 for 2 weeks basically. No way this could have resulted in Djokovic getting the virus????

Everyone participating was immediately tested after Grigor's announcement. Everyone EXCEPT FOR NOVAK. He said he wasn't feeling any symptoms so he refused a test and headed home to Belgrade. What an asshole. I guarantee he thought because he had no symptoms there's no way he had it. Up until this weekend he probably didn't believe in the virus' existence. His wife is a 5G conspiracist as a cherry on top. Despite multiple players testing positive who he'd been around all week AND his own fitness coach, he didn't bother taking a test with the rest of the players. Nope, no way the great Djokovic could fall to a virus like this. Positive vibes would defeat corona. It's June 23rd and I think we have asshole of the year basically wrapped up already. Never seen a performance quite like this one.

It's impossible for someone of his level of celebrity to be having a worse quarantine. It's truly impressive how with every move he makes a worse and worse decision. I can't wait to see what he says in response to this. There's a real chance he held this tournament on purpose to get the antibodies so he wouldn't have to get a vaccine down the road. 4D chess move if you ask me. Wouldn't put it past him for a second.

I'm sure the Djokovic stans will continue to push forward despite today's setback. Some of the craziest people on Earth. 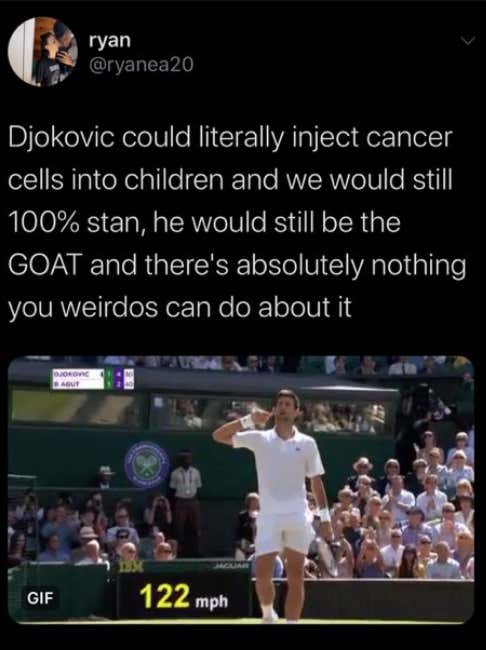 But hey maybe he can try and change the molecular structure of the virus with his mind and create a vaccine. It's the least he could do with his pseudoscience powers. He should go on IG live with one of his witch doctors again and come up with a plan.

By the way, Kyrgios is going to have a field day with this. He HATES Novak and has been against anyone playing in this sort of thing the whole time.

P.S. Also, these blogs I've written about the tennis tournaments Djokovic held aren't to say we shouldn't be having sports and trying to come back as a society. It's just saying have some fucking common sense when you do those things and take precautions. Don't act like we haven't been in a global pandemic for the last three months. You need to have precautions with everything you do. That's all I'm saying.