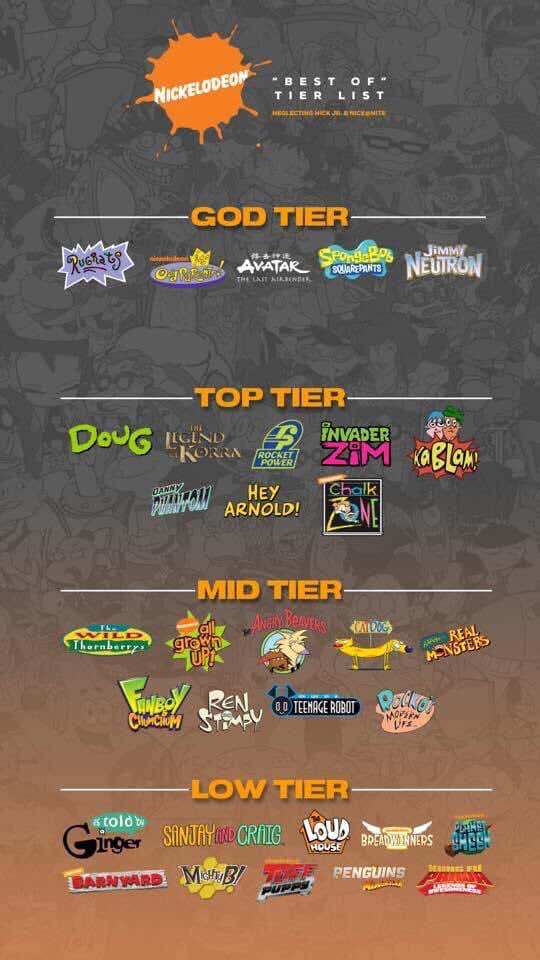 I was just trying to scroll the internet. Nothing more, nothing less. Just minding my own business when the above graphic made its way into my line of sight. I nearly collapsed on the floor. Just putrid, garbage tiering done by some monster out there trying to goad me out of my hide hole and get back to tiering. Well, asshole, I've got some bad news for you: it worked. Here I am, back to tier yet again. But before we get to the important stuff, I don't know what Tuff Puppy is. Kung Fu Panda is a movie, I wont hear any arguments to the contrary. So my tier will have no Teenage Robot or Danny Phantom. My Nickelodeon cartoon range starts on August 11, 1991, and ends on March 30, 2001. If your cartoon didn't debut on the orange splat within that timeframe, I've got nothing for you. If it did, well then,, buddy,,, buckle up. 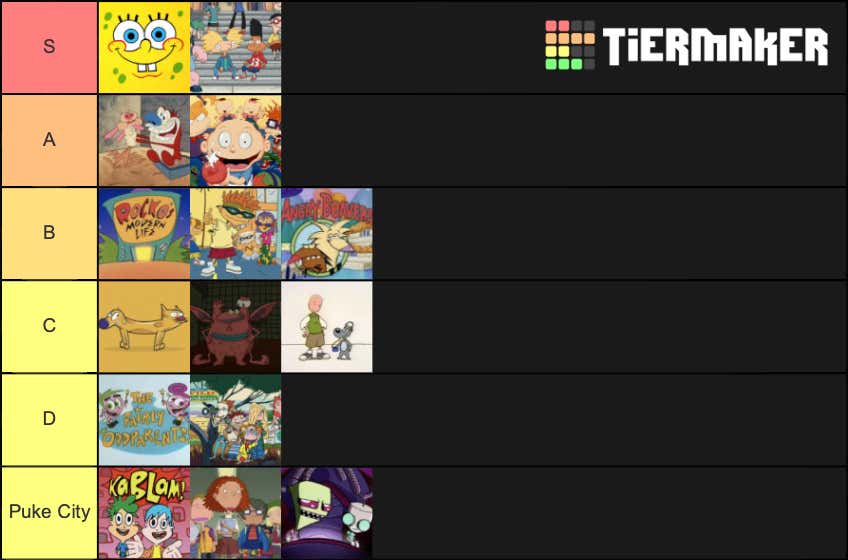 I've said it before, I'll say it again: Spongebob Squarepants is a top five cartoon. I'm talking all cartoons, The Simpsons, Looney Tunes, all of them. It hits all the correct notes and has the longevity to match. Never mind the impact it's had on memes and the internet as a whole. It is, for my money, a perfect show. I debated putting it on the S Tier alone, as it stands head and shoulders above the vast majority of programming any network could put on the table. But that would be a massive disservice to Hey Arnold! which also belongs on this tier. I wont give it the superlatives Spongebob earned but it's a different type of powerhouse. Hey Arnold! is Greg Maddux. Wont blow you away with 98 mph cheddar but racked up 300 wins all the same. Let's take it back to the first episode: Arnold and Gerald accidentally get caught up in a drug deal gone awry after ditching their school play. They paint the town red with their new found fortune and must escape dangerous mafioso types in order to safely return to PS 118, where they perfectly hit their marks in Helga's musical about fruits. And it only got better from there. This is Nickelodeon's S Tier and you're welcome for pointing that out.

Can't remember a tier with such polar opposites like this. Ren & Stimpy ever being allowed on television, let alone being one of the three original programs Nickelodeon brought to the table in '91, is nothing short of insanity. I imagine at least 75% of Americans on ADHD medications were caused by this show. Each scene was weirder and more confounding than the last. I'm glad it existed, because it truly is stark raving mad. But it was fucking funny, extremely iconic, and wildly problematic. Rugrats? There are theories out there that suggest Rugrats was the sickest, most demented show of all time. Saying that Angelica was the only, actual, living child, that Phil and Lil died in the womb which is why they're twins: the parents never learned the gender. Tommy died and that's why his father is constantly making him toys. It goes on and on in an attempt to explain why these literal infants were constantly not being watched by their parents and how they were able to engage in such hijinks. Personally, I think that theory fucking stinks and it was a cartoon for children which is why they had children doing things most children couldn't do. Perhaps I'm naive and simpleminded and a big dumb dumb but that's how I felt watching it. Also mostly because Spike could see Tommy and dogs don't lie, so take that Psychology 101 students.

These next two tiers is where I anticipate you rubes and fanboys start yelling at me to log off. Well, I'll never log off. All of these shows rule. All three of them. Rocko's Modern Life was as fucked up - at points - as Ren & Stimpy. But Rocko's ability to reel it in every now and then made it as enjoyable to me. It's the first show I can remember that made Death a recurring character. It had all the classic cartoon tropes that literally any object could become sentient despite mimicking the real world. I heavily weighed having all of these shows a tier above, but none were ever quite as big nor as iconic as the two above. Rocket Power was cool as hell. In my mind this came out exactly the same day as Tony Hawk's Pro Skater and we all, universally, agreed that skateboarding was king and the X Games would be more important than the Olympics. Otto and Reggie Rocket were the best brother/sister athletic duo to come out of California and you can tell Reggie and Cheryl I said it. Angry Beavers was brilliant. I fucking loved Angry Beavers. Classic storytelling mixed with absurdist comedy. Angry Beavers did a fucking telenovela for crying out loud. I don't know why it wasn't bigger than it was but Angry Beavers was the truth and deserved more than a four year run.

I'm sure there's a lot of Doug stans out there filling their diapers beyond capacity seeing this ranking. Doug was one of the original three along with Ren & Stimpy and Rugrats. Rugrats run lasted until 2004, 13 years of putting numbers on the board. Ren & Stimpy made it to the tail end of 1995. Doug? January '94. Nearly two calendar years less than Ren & Stimpy. Like when Doug came off the air Nickelodeon had only added Rocko's Modern Life to the equation, it wasn't like they had some surplus of original content they needed to push over Doug. It wasn't a flop, I enjoyed Doug for what it was, but it wasn't elite. None of these shows are elite and I enjoyed all three. Catdog was solid. I know a lot of people hate its guts but people are wrong sometimes. The Greasers alone made Catdog B- television. Aaahh!!! Real Monsters was quality, I would personally tier it a bit higher but that's what people haven't figured out yet. I don't do these tiers for me. I do them for the history books. So that when future generations look back they have a guide, a key, a Rosetta stone to help them navigate our time on this floating rock in outer space. It's truly a selfless act. I'm not demanding credit, but if it were up to my wants and desires that wouldn't be noteworthy. All tiers are done with personal bias aside. Catdog, Aaahh!!! Real Monsters, and Doug are equivalent levels of cartoon entertainment. That's probably not something that ever crossed your mind but now that you're here you'll be happier for recognizing it. I don't know how, but that's not my problem.

Fairly Odd Parents and Invader Zim were the two "newest" shows to crack this list. One of them was even good! I'd characterize both these shows as, "I wont turn this off if it's on." A magical adventure after a jazzy theme song? Sign me up. A magical adventure involving talking animals throughout all corners of the world? Sign me up. But neither hit the highs of anything tiered above it. The Fairly Odd Parents have a couple quality memes floating around out there, Wild Thornberrys had a talking chimpanzee on every episode. You take your wins where you can get them. And I'm sure there are some younger readers out there who idolize The Fairly Odd Parents and haven't even heard of Ren & Stimpy. That's why you're on that side of the computer and I'm over here tiering correctly. Again, everything in tiers S-D are shows I have watched and will watch again. There's only cause for shame if you find yourself in one tier. Speaking of which.

What the fuck happened with these shows. Kablam!??? Garbage. Invader Zim might as well have been a 30 minute Hot Topic commercial. As Told By Ginger? Like if Clarissa Explains It All was animated but also bad and not actually good. Kablam! is when I got some of my best thinking done as a youth, since it was essentially like being in time out. Just waiting mercilessly for those 30 minutes of programming and commercials to expire so that literally anything else could come on. Invader Zim is probably what pushed me into puberty, all but killing the boyhoodish glee I vaguely recall possessing before. That's when I knew they were no longer making cartoons for me and my kind but for the next generation. I'd rather read a book, honest to God, than watch Invader Zim.