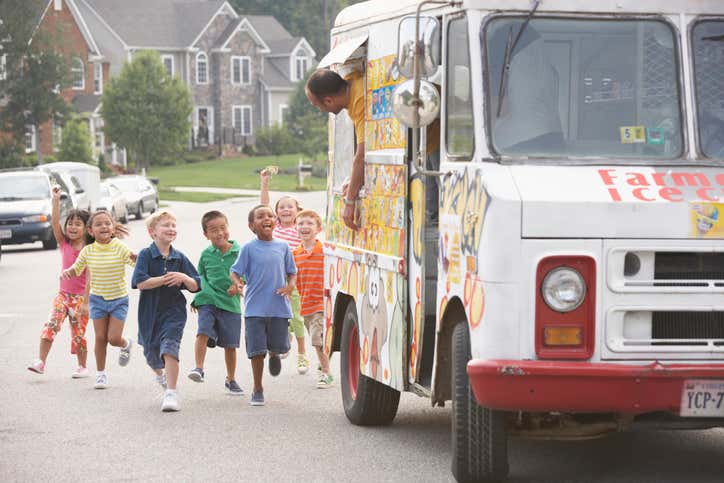 So a little backstory here. My apartment is catty corner to a playground which is also right in front of an elementary school. So any day where the weather is even moderately warm, there is a Mister Softee truck that just sits out there for hours on end. Listen, it's good business. You've got a ton of kids running around with their parents money burning a hole through their pocket. I get it. And for most people this wouldn't be an issue because they have a 9-to-5 job which requires them to work from an office somewhere. Actually, a lot of people on my street are nurses so they wouldn't be working a 9-to-5, but they're also not working from home. But not me. I'm here at my apartment and I'm a big fan of fresh air so I usually have my windows open. Which means that for at least 3 hours of the day, I'm listening to the Mister Softee jingle on repeat.

You'd probably think that I'd be sick of the song by now and let me tell you....you're absolutely right. I am so fucking sick and tired of that goddamn song. I'm convinced at this point that it'll be the last thing I hear before I die. I've been in this apartment for 3 years now and if I had to total it up, I'd say I've heard that song for no less than 1000 hours. Borderline torture.

But here's the thing. I'm a journalist. And as a journalist, I cannot allow my own personal opinions to get in the way of the truth. And the truth of the matter is that I still think the Mister Softee Jingle is the GOAT when it comes to ice cream truck music.

That shit just goes. It has no business going as hard as it does, but it does. Even on days when that bastard is pulling up at 10:30am and doesn't leave until 6:15, I find myself nodding along from time to time. The hook is tight. The change in pace is correct. Everything about it flows.

Obviously the other contender in this battle would be "Turkey In The Straw".

And make no mistake--this shit slaps as well. The only thing that I don't know about this song is whether or not you can sustain it for a long period of time. "Turkey In The Straw" is one of those songs that you'd hear as a child coming from 6 or 7 blocks away. You'd rush inside to ask your parents for a dollar or two to buy a chipwich. Then the truck would be passing your house just as you'd open the door to rush outside. So then you'd be running down the street trying to haul this son of a bitch down. You'd better hope your shoes were laced up tight because you were in for a sprint. "Turkey In The Straw" trucks were always fucking around like that for some reason. But once you were standing there in line catching your breath, the song just didn't hit as hard for some reason. "Mister Softee" had that sustained enjoyability. "Turkey In The Straw" was all about the chase.

The one thing I'll give "Turkey In The Straw" a clear advantage in, however, is in the remixes. Jibbs murdered this one.