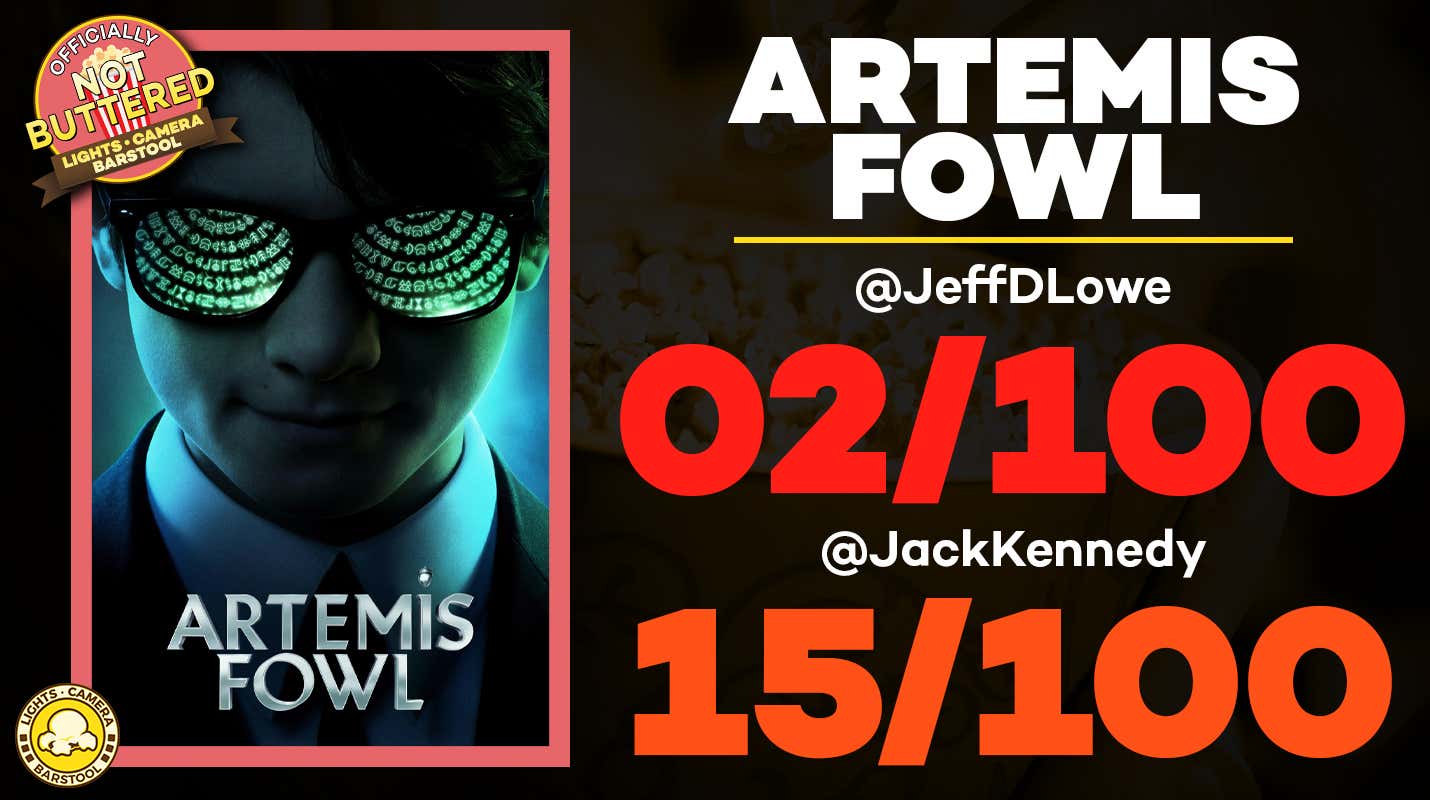 Oh... fuck... 'Artemis Fowl' was delayed almost a year ago. It is finally out. That's really all we can say about it. But we will try our best...

Artemis Fowl is a 12-year-old genius and descendant of a long line of criminal masterminds. He soon finds himself in an epic battle against a race of powerful underground fairies who may be behind his father's disappearance.

'Artemis Fowl', at roughly 90-minutes long, is both far too short to properly tell a story or flesh out characters and, at the same time, far too long in a sense that it probably shouldn't have been made.

I ask this question: what were they thinking here?

The only redeeming qualities in this movie are Josh Gad, who tosses in some charm, and a few visual moments that stick out. That's it, otherwise, this movie is as close to a total dud as possible. They even found a way to screw up Gad's involvement with the movie by forcing an unreal amount of narration over the movie. His character, the farting Mulch Diggums, narrates almost the entire opening 10-minutes of the movie, arguably the most boring opening to a movie I have ever seen.

'Artemis Fowl' is a result of trying to cram so much fucking stuff in a fairly short runtime. The issue, on top of the clunky movie, is that everything packed inside is incredibly uninteresting or just straight-up bad. The acting is below-average at best across the board, some of the special effects are hilariously outdated, and the story is all over the map. I've never watched a movie with so many random storylines that I never really feel like I get answers to at any point.

I don't even really have the desire to tear apart more than I have at this point. The movie doesn't offend me like 'The Last Missy' did, but I also can't really sit here and say anything good about it. This is a massive, massive live-action swing-and-a-miss from Disney with one of their most poorly-executed movies ever made.

If this is supposed to kick-off a franchise of YA novel adaptions into movies, it is probably a good time to re-think the strategy.

KenJac (15/100): DISCLAIMER: If you are reading this and you happen to be my new best friend Josh Gad, I just want you to know that the above score is just a gag and this movie was actually the best. Ok, you can stop reading now!

Ok now for everyone else. Just as a quick preface, I am a 27-year-old man and definitely not the intended audience for this YA movie. That said, this movie is, well, quite bad. It is a nasty combination of a shallow plot with stinky CGI and one of the worst child acting roles I’ve seen since the Phantom Menace.

I’ll start with the good, which begins and ends with Josh Gad. Trust me when I say that I’m not blowing smoke up his ass because it’s all relative. I kind of like that he did a different voice to help distance himself from Frozen/Beauty and the Beast, and all 3 lines that were even remotely funny throughout the film were said by him. Ok, now let’s talk about the bad.

Ferdia Shaw (Artemis Fowl) is simply not good in the movie. He’s just a 16-year-old kid who may go on to have an outstanding career after this, but he was just no Bueno. I place most of that blame on director Kenneth Brannagh, though. Dame Judi Dench also stunk, and was seemingly being Weekend at Bernie'd through the whole film. Colin Farrell got what we call on Lights Camera Barstool getting “Channing Tatum’ed," in that he was teased as being a big part of this movie but appeared very briefly and left no impact. That said, I think both Nonso Anozie and Lara McDonnell did a pretty good job with what they were given.

Structurally, this movie is a goddamn mess. You know when a receiver drops a pass because they are already looking upfield at their next move? I think that is kind of what happened here. So much of this movie is seemingly missing because it was definitely made with a multi-sequel franchise in mind (There are SIXTEEN Artemis Fowl books). By looking at that future and trying to set up the sequels, they failed to make an enjoyable standalone movie. Besides the sloppy mess of a plot, the movie also HEAVILY uses CGI to a fault. That’s totally fine considering the movie is about fairies, trolls, etc. The problem is that the CGI they used looked at least 15 years out of date. The recurring troll they use is honestly outclassed by the one from ‘Harry Potter and the Sorcerer’s Stone’ 19 years ago.

As much as I didn’t enjoy the movie, I will note that the intended audience (kids) seem to love it. Like a ton of people right now, I’m stuck quarantined with youngins who are obsessed with Disney+. Eight-year-old Harper told me Artemis Fowl is, “Her favorite movie ever.” While I hope she will grow out of that opinion, the point remains that the intended audience enjoys it. So, in a way, it is actually a successful film.

--
Goodness. The movie is Officially Not Buttered, even before factoring scores from our Audience and Trillballins. You can head to Lights Camera Barstool right here to listen to our latest episode where we interviewed Judd Apatow and reviewed 'The King of Staten Island'.

Until next time, enjoy the movies.